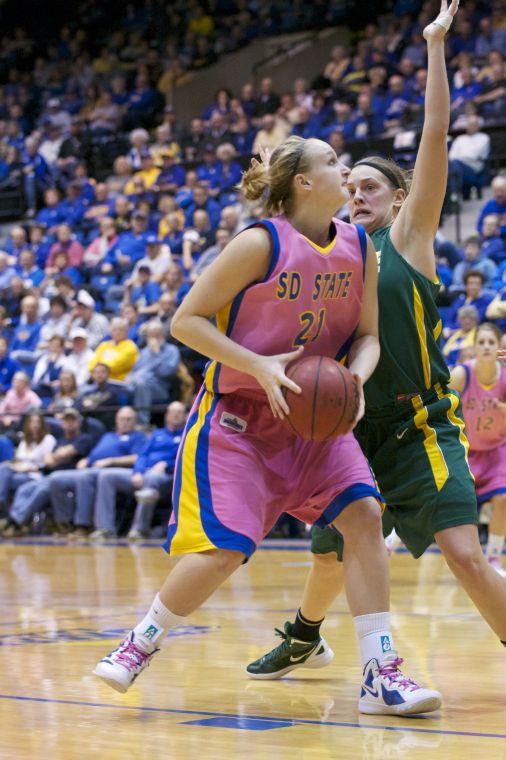 Leah Dietel looks to shoot in the first half of the Jacks' 88-43 win over NDSU Feb. 18. / Collegian Photo by Aaron Stoneberger

SDSU nearly tied a school-record for three pointers with 15 and dominated rival NDSU for the second time this season in a 88-43 win at Frost Arena Saturday. The win guaranteed the Jackrabbits at least a share of the regular season conference championship in the Summit League.

Seven threes fell for the Jackrabbits in the first half but SDSU was in a battle with the Bison over the first eight minutes of the game. NDSU led 14-13 but the Jackrabbits went on a 13-0 run and that’s where NDSU coach Carolyn DeHoff cited her team’s struggles to hang with the Jacks.

As if the game was not already in hand at the halftime break, the Jackrabbits launched a 23-0 run to stretch the lead to 41 points and helping continue the recent string of dominance over the Bison. Saturday’s victory makes it 13 wins in 14 tries for the Jacks over NDSU.

“I don’t think it has anything to do with who we were playing but I think we jsut connected really well today. We found the open people and we got our inside-out game really going today,” Steph Paluch said.

Once the game was in hand, the contest drew comparisons to the matchup earlier this year in Fargo, where SDSU shot the proverbial lights out and knocked out NDSU early in the second half. Even then, the Jackrabbits led by 20 at halftime and after holding NDSU to 27 percent shooting, SDSU head coach Aaron Johnston credited his defense.

“It’s been the best thing we’ve done all year, the way we’ve defended and the way we’ve rebounded. We’ve been exceptional defensively,” Johnston said. The Jackrabbits finished plus-18 in the rebounding category.

Twelve SDSU players recorded time in the blowout and 11 scored at least two points. Paluch led the Jackrabbits with 18 points, followed by 17 points from Jennie Sunnarborg and Eide. Jill Young rounded out the double-digit scorers with 13 points.