The ‘Coolest man in comedy’ 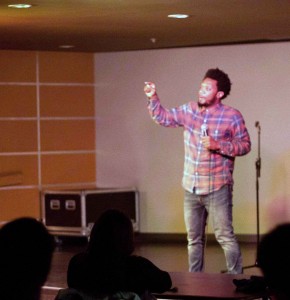 From North Carolina by way of New York City, comedian Seaton Smith spent just enough time to shake off the cold in his hotel room before he was on stage again at Jacks Place. All together, he spends less than six hours in Brookings. More than enough time to crack up the Rushmore state.

Seaton hadn’t yet rubbed away the jetlag from his flight when he took the union stage. The audience never knew he’d just been through the ringer. Three shows in three states in three days. A comedic hat trick. Seaton left the audience gasping for air, and one girl laughed so hard she couldn’t stop snorting. It was exactly the type of humor that got him noticed comedy greats like Bill Burr and Jim Norton. Smith opened for the duo’s “Anti Social Network” at Constitution Hall last May. If his career’s recent trajectory, and constant elbow rubbing with the gods of comedy is any indication, expect to see his Comedy Central special any day now.

Seaton’s just finishing his eighth year in comedy, but perfecting a comedic style can take decades. “I’m at the point in my career where I’m trying to ask myself where my comedy comes from, and where I’m going from here,” he said.

Though a seasoned veteran of eight years, Seaton is just developing his comedic style. He may even be ahead of the paths of comedy legends like George Carlin, who spent at least fifteen years polishing his brilliant wit to blasphemous perfection. Richard Pryor was in the business eleven years before he developed his comedic chops, and Chris Rock, a more recent example, delivered twelve years worth of punch-lines before his major breakthrough. Seaton certainly has reason to celebrate tonight, not only in looking ahead to a long, promising career. Tonight is his birthday. At midnight, he turns thirty.

Smith has plenty of experience handling the loneliness of life on the road. Comedians like Seaton often celebrate however, and with whomever they can. To chase their dream, many comedians like Seaton sacrifice social lives, family, and a sense of normalcy their audiences take for granted.

As we walk through the doors to the bar, Smiths phone is buzzing with birthday wishes from his friends. “I don’t really have friends like you’d think, though,” He says “I have a lot of people that I work with, and we do projects together, but we don’t hang out like friends do. I don’t have the time.”

He spends the endless traveling hours writing comedy and reading novels. He just finished the fourth book in George R. R. Martins Game of Thrones, and the cover of his favorite novel, The Alchemist, is tattooed on his right arm. Reading wasn’t always so helpful to him. Seaton was often harassed for reading as a young student in the Washington D.C. He says classmates called him an Oreo, “Because kids said I looked black and talked white.”

This teasing didn’t last long, though. Today, the coolest man in comedy has a magnetic personality, and a film studies degree from Howard. He regularly is asked to appear as a commentator on news network Russia Today, and It seems the reading and teasing have paid off. But now, at the bar after the show, the years of life on the road seem to weigh heavily on him. Eight years is a long time waiting for a break.

He looks lonely, but Seaton rejects that “I’m not alone, I just got 218 posts on my facebook wall,” he says.

The bar clock rounds 11, It’s now his birthday in New York. The laughter of the audience has been replaced with subdued chatter from the bar TV. Happy birthday, Seaton. We drink a toast to Seaton’s career and Kobe Bryant, the star player of his favorite basketball team. “A nice glass of bourbon really helps keep me sane,” he says.

The Lakers beat the Nuggets that night by four points. “It’s been a pretty good birthday,” he said, looking blankly down at the bar as he stirs his bourbons ice.