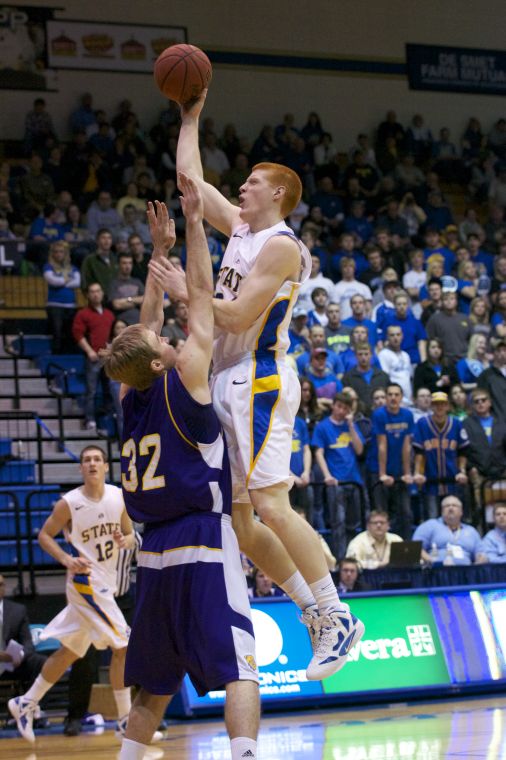 Tony Fiegen tries a jumper in the first half of SDSU's 74-57 win over Western Illinois on Feb. 23 / Collegian Photo by Aaron Stoneberger

Western Illinois rarely finds a defensive struggle that they don’t like and SDSU played along until the threes were too much for the Leathernecks.

In what can best be described as a rock fight, the Jackrabbits showed their outside shooting prowess in a 74-57 win over the Leathernecks on Thursday night in Brookings, extending SDSU’s home winning streak to 17 games.

SDSU made nine three-pointers, five of them from Jordan Dykstra who complete a perfect night from behind the arc with 23 points and eight rebounds.

“We just had to swing the ball from wing to wing and the coaches have been harping on us all week because we haven’t been doing that lately. We did that and we had some open shots,” Dykstra said.

The Jackrabbits (23-7, 14-3) opened the game to a 7-0 start but unlike their recent home trend of blowing out Summit League teams at home, Western fought their way back into the game and scoring 10 of the next 12 points. SDSU rallied for 17-5 run over the middle of the first half and the Jackrabbits built an 11-point lead at the break.

WIU had trouble controlling the pace in the second half and the Jacks’ continued to get open looks from deep, connecting on three more triples and the last of which coming from Dykstra to make it a 20-point game with over three minutes left.

“[WIU] is a team that likes to pack it in and we thought that by moving the ball and setting screens, it would open up our offense,” Taevaunn Prince said, who finished with 13 points for the Jacks.

SDSU finished the game with a 12 rebound advantage over the ‘Necks and finished with 19 assists on 26 made field goals, their best assist-rate in a single game all year.

The regular season finale will be played on Saturday at Frost against IUPUI, winners of five of the last six and come to town fresh off a win over third-place NDSU.