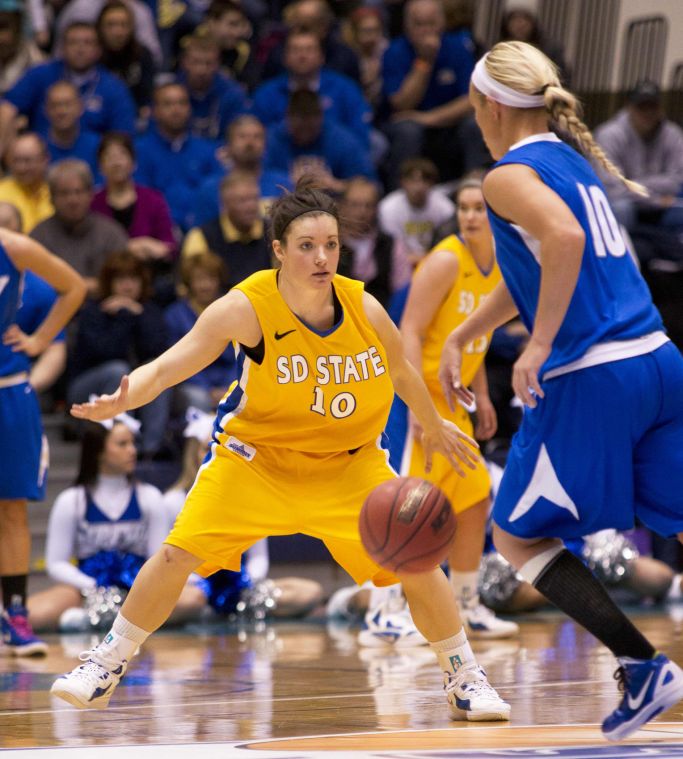 It serves as little surprise that top-seeded SDSU had little trouble finalizing plans to play Monday afternoon in the second round of the Summit League tournament.

SDSU made good on its previous outings in the Summit League quarterfinals, cruising over the bottom-seed IPFW Mastodons in a 80-57 win Saturday afternoon, their 10th-straight win in the league tournament they’ve never lost.

That margin of victory, coinciding with previous convincing first-round wins of 28, 39, 11, and now 23 points gave the largely SDSU fans at the Arena only sparse moments of excitement, and plenty of time to confirm what was expected of a conference champion facing the last team to clinch a tournament bid on what has become SDSU’s quasi-home floor.

And after all, they’ve clinched an NCAA tournament bid three-straight years and are the front-runners to represent the league for a fourth time.

“Good start for us,” said Jacks coach Aaron Johnston, whose team plays again Monday against NDSU or IUPUI in the semis. “It’s difficult to get that first game going leading up to it because people have been talking about it for a while … I thought we played really well, defended well throughout.”

Sophomore Tara Heiser led that non-starter charge with 10 points (nine of those in the first half) and five rebounds, matched equally by junior and Pierre native Katie Lingle’s 12 points on 5 of 8 shooting and six rebounds. Gabrielle Boever, in her first tournament game, missed none of her three shots from the floor and added four assists in 20 minutes.

“They’re good,” junior guard Steph Paluch remarked about the bench play. “We’re really deep and that’s exciting, it’s nice – Ashley (Eide) got in foul trouble and we were still able to do pretty well in the first half … everyone does a good job of coming out and doing their jobs.”

Yeah, the Jacks rounded up 80 points even with a jittery start, even with no single player playing more than 28 minutes and even with potent shooter Jill Young not attempting a shot in the first half. Plus SDSU slowly built its lead, cresting at 28 points with almost six minutes left in the game, allowing every freshman to gain some Arena experience and giving the Jacks a coasting win before heading back to Brookings tomorrow for practice on the team’s off-day.

“We had a good start but didn’t take advantage of it” said IPFW coach Chris Paul, whose teams’ seasons have ended three-straight years to the Jacks in the tournament. “They hit a few more shots than we were able to.”

About the only blip came from the free-throw line, where the Jacks finished just 9-for-17. But they bested that effort shooting even better from 3-point range, with seven players making a shot from beyond the arc for a combined 11 3’s on 18 attempts.

That adds some more evidence that SDSU’s current run of post-season dominance over its league foes takes on more than one form for the hosts, backed by the lofty crowds of friends, family and “randoms” they’ve seen every time out in Sioux Falls, as termed by Paluch.

“It’s amazing every time,” she said.