Daum shines on offense, still has work to do on other end 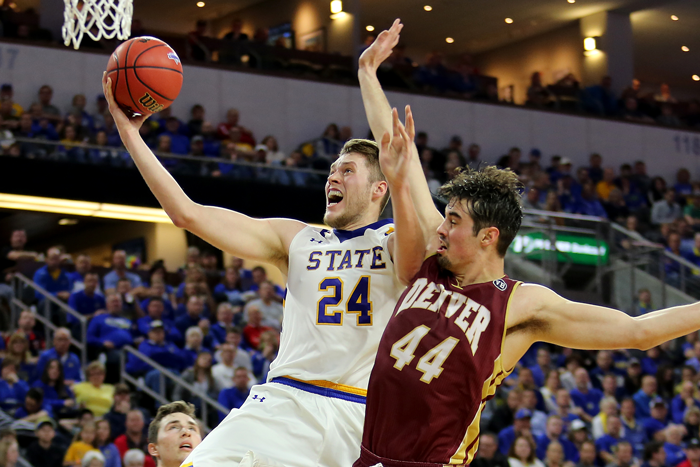 One thing was evident in South Dakota State’s 98-64 loss against No. 4 Kansas Friday night. Mike Daum needs to work on his defense if he wants to be a top draft pick.

Daum did his thing offensively with 21 points on 7-17 shooting from the field and 3-8 from three. But, at many times, he looked like he was lost defensively against Kansas’ 7-foot center Udoka Azubuike who scored 17 points on 8-9 shooting.

Kansas was without their star freshman Billy Preston who is being investigated by the university after he crashed a car earlier this month.

SDSU head coach T.J. Otzelberger said part of the reason he scheduled games against great opponents was to see how Daum would do.

“We want to have a chance to give him the opportunity to play the best. We’re not fortunate in our league to play against the size and length that you play in in these games,” he said.

The Jacks looked bad as whole on defense. Kansas shot 61 percent from the field and 48 percent from three. The Jayhawks also had 38 points in the paint.

Daum did receive a lot of praise from Kansas head coach Bill Self who said Daum should score 30 points and grab 15 rebounds every night.

“I think he could have had a big night, he missed some open looks,” Self said. “I don’t think we saw the best of him tonight.”

Azubuike and Daum went to a camp in Philadelphia over the summer and Daum said Azubuike’s game hasn’t changed at all.

“You have to keep him off the boards and eliminate the high energy plays and dunks,” he said.

Daum did a good job of keeping Azubuike off the boards as he had only two rebounds, but he had three dunks.

This game was a small sample size and Daum will have more opportunities to showcase against tough competition. The Jacks will play Ole Miss on Nov. 28 and at No. 6 Wichita State on Dec. 5. This will give him a chance to show scouts he can play defense at an NBA level.