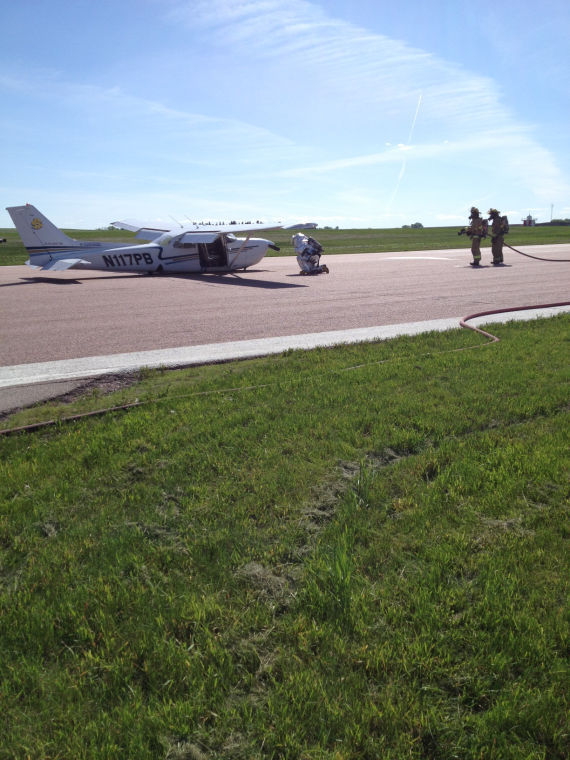 An SDSU aviation student is forced to make an unexpected emergency landing during a practice for an FAA practical test. The left main landing gear failed to retract completely.

On June 2, an aviation major went up in the air for a flight instructor checkride and did not expect the plane to make anything other than a planned landing.

A very experienced SDSU instructor and upper division student took off from the Brookings Recent Airport in a Cessna 172RG Cutlass airplane and were practicing for a practical test regulated by FAA, the student was working on his fifth FAA test, and almost done with his training, according to Aviation Program Coordinator Cody Christensen.

It was a controlled flight, and it turned in to an emergency gear-up landing. The emergency landing was caused by a mechanical issue with the plane, according to Safety Coordinator and Chief of Aircraft Maintenance Christopher Funk. The left main gear was not extending or retracting properly.

The student was Travis Olson, a recent SDSU aviation major graduate and now a commercial pilot. “When the incident happened I was preparing for my flight instructor checkride, which was scheduled to be immediately after that flight,” Olson said.

Christensen said the retractable gear when cycling had no issue, but when the student and instructor went to bring the gear down the instructor and student heard a bang.  It was then discovered that the landing gear on the left hand side of the plane didn’t come down to the unlocked position.

“I put the gear handle in the up position and it began to raise as it always does. Just before it was completely up and locked, we heard a loud bang,” Olson said. “We did several low passes to have someone visually see what was going on. The problem was our left main gear was not extending or retracting completely, it was just sort of hanging from the airplane.”

According to Funk, the instructor and student then started the emergency procedure.  There was plenty of time in the air before the emergency landing was made, the plane circled for about 45 minutes.

Low passes were made and fire rescue, police, paramedics and maintenance were all involved.

When the plane was finally landed, firefighters, the chief of police, airport operators and an ambulance were all on the ground ready to respond in case of an emergency.

The pilot in command makes the decision on how to execute landings in emergency situations.  In this scenario the landing gear was left up and that was the right decision, according to Christensen.

“The pilot successfully landed the plane just as he was supposed to.  He did everything perfect,” Christensen said.

The student and instructor couldn’t get the gear down, and they followed along the safety plan of how to handle the emergency. There was plenty of time and all of the options for the emergency landing were discussed. The final decision was to land the plane with all three gears up to avoid a wing tip catching and causing the plane to cartwheel.  The plane was landed on the runway rather than in the grass because there was a lot of rain and the plane might dig in and the emergency personnel may not have been able to respond as efficiently. The plane was landed within four feet of where it was asked to land and about six inches off the white line,” Funk said.

“The event was carried out really well, for as bad of an event as it was,” Funk said.

“When the plane came down all the landing gear was up—the student and instructor landed on the belly of the plane exactly as they were trained to do,” Christensen said.

The gear failure was later determined to have been caused by a mechanical issue, a broken actuator.

According to Olson, the airplane actually received very little damage, the propeller and belly took most of it. Funk said he estimates the broken landing gear to cost about $10,000 and the damage from the crash to be about $65,000 to $70,000.

The instructor and student walked away without a scratch. “The whole thing was a great learning experience and we were both able to walk away from it,” Olson said.