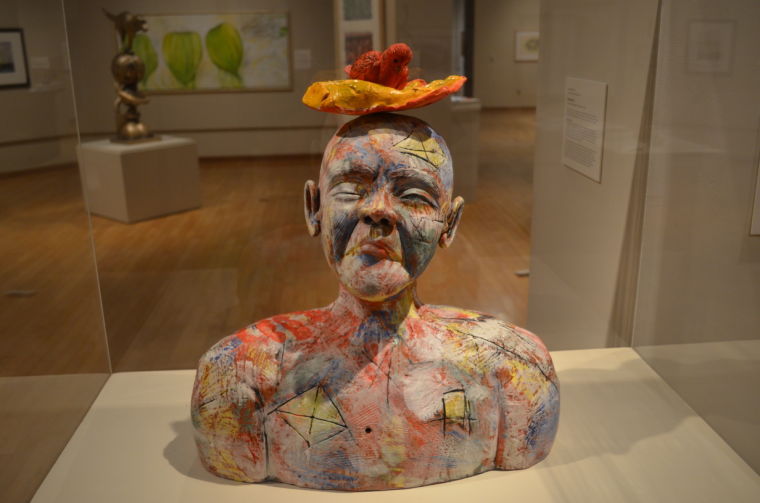 Little Bird Fly  by Jeannie French is made with multiple elements; Compression Graft  by Chris Meyer is made with the same materials as his Gleaner piece; Receiving Blanket  by Ann Porter of BHSU is made up of 150 feet of extension cord.

The South Dakota Art Museum currently holds six exhibitions, including the South Dakota University and College Art Faculty Exhibition, which runs from September 2013, through Feb. 2 2014. The exhibit holds works from 41 different faculty members from 10 different institutions across the state of South Dakota.

The South Dakota University and College Art Faculty Exhibition holds a total of 51 pieces from a variety of universities and colleges including SDSU, USD and eight other institutions throughout the state.

“They did a call for submissions throughout the state, and the South Dakota Art Museum staff selected the pieces” said Jodi Lundgren, Coordinator/Curator of Exhibitions.

The call for submissions went out in early spring and submissions came in over the summer, according to Lundgren. The idea originated last year when the College Art Association gathered.

Final selections were made by the South Dakota Art Museum staff. The artists submitted their various works, and the museum staff selected the pieces that would be exhibited. Numerous artists are represented more than once throughout the exhibit. When deciding where each piece would go, Lundgren said it all depended on how the pieces played off each other and what made the most sense for viewers walking through the exhibit.

“It’s exciting to have that much thought-provoking work together. It’s a great resource,” Lundgren said.

Of the 51 different pieces displayed in the gallery, including a sculpture outside of the museum, there is a large variety of mediums of work represented including photography, sculpture, prints, multi-media and many more.

“With this exhibit everyone took it seriously and everyone put their best foot forward” said director of the South Dakota Art Museum Lynn Verschoor.

With 10 different institutions represented, Verschoor explained that the exhibit provides a variety of perspectives.

The exhibition has attracted a large variety of people according to Lundgren, includ

ing students and the wider community. According to Verschoor, the overall response of the public has been excitement, due to the fact that they are given insight into work going on around the state.

There are 11 art faculty members from SDSU represented in the exhibition. The group of faculty ranges from long-standing faculty to new professors, which has stirred excitement for the staff at the art museum as well as the public.

“It’s a good way to be a part of the larger community of artists” said visual arts faculty member Peter Reichardt. Reichardt explained that many art faculty members divide their time between producing art and teaching. The exhibit provides the opportunity for professors across the state to see each other’s work and progress.

“Collaboration is important for the reason that we get to share, enjoy, and discuss the work with our colleagues at the other colleges and universities” said Tim Steele, the visual arts department head. The exhibit has a large impact on the visual arts department. The museum is a high visibility venue that provides faculty and students with the ability to share and benefit from each other’s work, according to Steele.

Classes have been in and out of the exhibition since it opened in order to see what their professors are working on. The consensus was that the connections and networks made between the faculty and the institutions were beneficial to both faculty and students Verschoor said.

“It goes back to the concept that we are stronger and better together than we are apart,” Steele said.