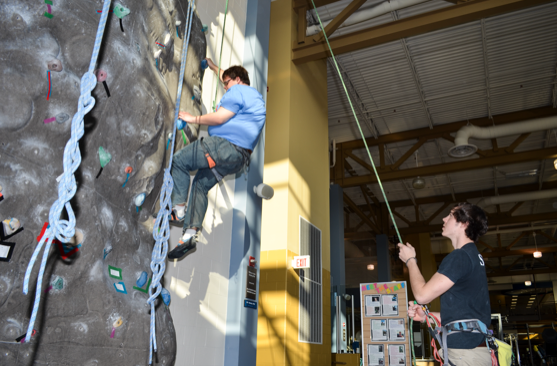 SDSU and USD are the only schools in the state that have climbing walls.

Your average rock-climbing harness is rather snug. Well, most of them should be snug since they are the contraptions that are holding you in the air while you climb a rock wall for fun.

I’ve never climbed anything really, maybe your average jungle gym while I was younger but nothing as tall as the SDSU rock wall. I was genuinely scared of doing this task when The Collegian asked me to.

I stood before the 25-foot monolith and asked an employee what it takes to climb a rock wall since I’ve never done it before. Ethan Graff, a junior pre-occupational therapy major tosses me a large pair of climbing shoes and that snug harness.

“[The harness] should be above your belly button,” Graff said while I tightened all the proper straps and rearranged.

Graff, identifies as a “gym rat” or someone who frequents gyms to rock climb. SDSU and USD are the only schools in South Dakota that have indoor rock walls, and Graff claims not a lot of people know about the service. He believes that students think the rock wall is something extra that isn’t already included in their Wellness Center memberships. He puts a rope through my harness and ties a fancy knot for my safety and sets me loose to climb.

“Every climb is like a puzzle,” he said. And I started to look at mine fully geared up. “You get an adrenaline rush.”

I told myself before I started that good challenge is always nice, it gives me something to work for. Most people think like this, especially those who attend a university.

And so I started to climb and work on the vertical puzzle, and I’m not the smallest individual in the world. I’d grab onto each of the climbing holds and my hands would easily tense up. And I would ascend upward one hold at a time, swung my legs around to approach and get higher on the puzzle.

Just below me were a child and his father, who started climbing right next to me and in less than no time were already at my pace. They made this whole ordeal seem easy.

While I was hanging there waiting to make my next move, I thought about the idea of doing this outside without Graff below me making sure I don’t fall to the ground.

Graff told me about outdoor climbing and the challenges it faces. There are more contraptions in play: gears that will expand in a rock so you can latch onto it and move up, picks, special types of shoes, all of which is way out of my knowledge other than simple names and descriptions.

However, I felt this puzzle was challenging enough, that doing it outdoors and going another level wasn’t for me.

Now remember, this entire time that Graff stood down there belaying me — with a rope around his body, connected to my body and he was my support system. I didn’t get all the way to the top; I only made it about four-fifths of the way. And when I finally gave in, Graff was there to help me down and encourage me, and my puzzle-solving ability.

While I was at my own personal top of the rock wall, I looked down and saw everyone supporting and helping each other, not only at the rock wall but also at the weight area, the track and the fitness rooms across the whole compound.

People seldom have to solve puzzles themselves. 9 times out of 10, there will always be someone with you along the way.

Once I was back on the ground, Graff mentioned that he was impressed with how well I did my first time and had nothing but encouraging words for me while I stood there and shook uncontrollably from the adrenaline rush I had the entire time.

Walking away from the rock wall and the Wellness Center, I felt amazing and it wasn’t just because I climbed four-fifths of a rock wall, but because I was supported in something that I’ve never done before — and it makes me want to do it again.