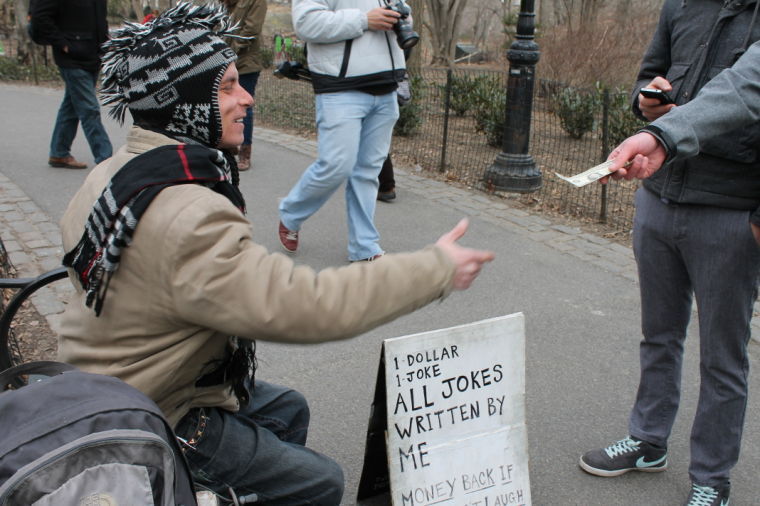 In Central Park, advertising manager Brady Krumwiede and former sports editor Justin Harned give a man a dollar in exchange for a joke.

Over Spring Break, I had the privilege to go to the College Media Association’s Spring National College Media Convention in New York City. Nine members of The Collegian staff were among 980 other student journalists and 220 advisers attending the convention. Although we were just a small number, The Collegian made its mark.

At the convention, there were over 250 workshops given by professionals working in the field. Sessions on sports, advertising, broadcasting and news editorial were given, all to invigorate the young minds and the future of the press. Presentations were given for advisers with information about management and sessions for non-journalism majors were presented. Students had the opportunity to sign up for media tours with different organizations such as Viacom, Hearst Magazines, CBS News and the New York Times. With the large number of sessions, there was something for everyone.

The workshops, I feel, were incredibly beneficial. They provided me with information on how to improve The Collegian and myself as a journalist. Tips for writing, editing and conducting interviews gave me a refreshed perspective on correcting stories while working on a page. Through the workshops, I was also exposed to different applications and programs on how to improve The Collegian brand on Twitter, and how to represent our content in more attractive ways. Responding back to followers on Twitter, using trends and constantly updating profile and cover photos on Facebook were just a few of the tips given by professionals. I was presented several applications such as My Tabz, which puts direct links on a Facebook page for viewers to click on. Another program was ISSUU, which makes your publication compatible to almost any mobile device.

Several facts of how to succeed in journalism were reinstated. Networking, helping out others and staying out of certain rants in the media were among the tips given to student journalists to help us improve our image and career to the best of our abilities. These were nice reminders as many people (including journalists) can often become caught up in the media. It is good to keep focused on what is important and what needs to be achieved to become the best journalist we allow ourselves to be.

Although the workshops were factual, the presentation I enjoyed the most during the convention was the keynote speaker, Scott Pelley. Pelley is an anchor for the CBS Evening News and a writer for the CBS production, 60 Minutes. Pelley told us that there is no democracy without journalism, and that we were vital to the future of the press, and he stressed that the press needs to be honest and factual. He gave us tips on being good writers and that rewriting even the greatest story is essential.

For me, the most influential part of Pelley’s presentation was getting to ask him a question. Some students asked questions that were irrelevant to his presentation, looking to get a story, not advice. Being a journalism major with a broadcast emphasis, I decided to ask Pelley what it would take to land a job on a national news network. He told me that persistence is key; in order for him to get a job with CBS, he had to apply multiple times. He said that to work in the national news, you have to have fire in the belly and be a great writer. Pelley mentioned that he still works weekends and late hours and that journalism can be hard on a family. To directly answer my question, he pointed to me and said, “It ain’t easy, but it’s possible.” I do not feel that a student journalist could get much more motivation than that from a professional.

The Collegian staff and I not only attended the convention, but we went sightseeing in New York City. The conference and our lodging were located in Times Square, where we spent most of our time. While there, we saw large billboards which lit up the night sky, and shop at stores that were open until 2 a.m. We were chosen to view a taping of the Late Show With David Letterman and were part of the large crowd in the background during a live broadcast of ABC’s Good Morning America. Using the subway to travel, we saw Grand Central Station, Wall Street, the 9/11 Memorial and the Statue of Liberty. There were several firsts made on the trip from eating an expensive piece of authentic New York cheesecake, or being teased for using the word “pop” instead of “soda”. Personally, I got to experience airport delays and riding on an airplane for the first time, which ended up being quite the experience for all. While in New York, it was the first time I had taken a subway or even seen the ocean. It was a great feeling being exposed to the culture of the city and seeing something else other than the Midwest.

Although we were in New York for three short days, many adventures were conquered. Surprisingly, we were given the refreshing experience of seeing other SDSU students half asleep in the New York LaGuardia Airport at 4 a.m. The trip was beneficial in not only journalistic aspects, but to have new experiences and perspectives. A man on the subway told me that one could live in New York City their whole life and not see it all. Even though The Collegian got only a small bite out of the Big Apple, I think it was the sweetest taste of all.