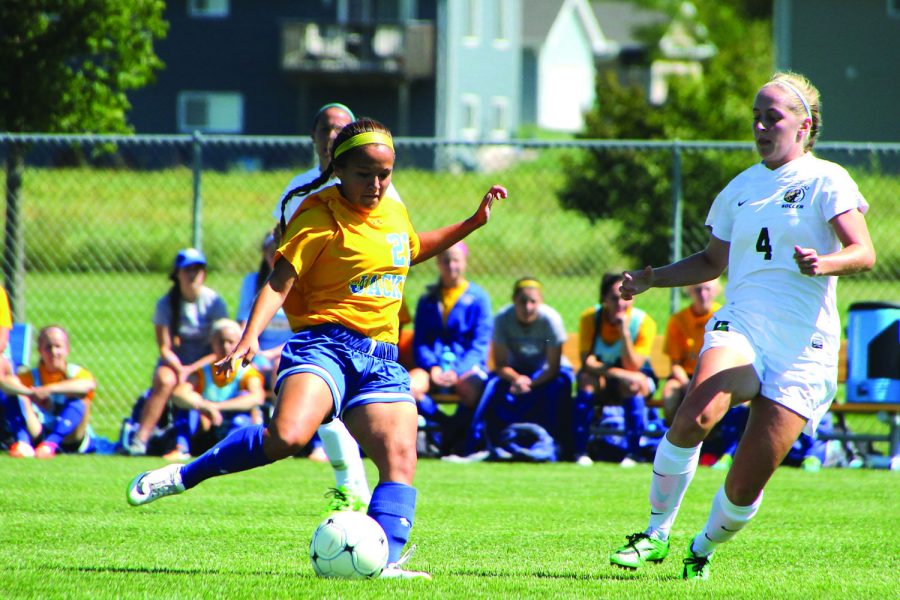 The Jackrabbits women’s soccer team finished off a winning weekend with a 3-1 victory over Bemidji State on Sunday afternoon.

Though not fraught with the late game dramatics of Friday’s game, the first half brought strong scoring opportunities to both teams. Just two and a half minutes into the game Shelby Raper broke down the sideline with the ball and had a shot go just wide.

Bemidji State would strike first in the affair when goalkeeper Elisa Stamatakis tried to clear the ball from in front of the net, but instead had it stolen and launched back over her head by Bemidji State’s Rachel Schueller.

Alexa Trakalo answered three minutes later for the Jacks, finding a loose deflection and driving her first career goal into an open net vacated by Sonja Barr who was injured on the play.

“She’s [Alexa] certainly playing with more confidence and she’s always had that ability so it was nice to see her get a goal today,” Wedemeyer said.

Next up to score was Alyssa Brazil who received a backward pass from Diana Potterveld to give her an open shot.

“If anyone knows Diana, you know that she always loves the back heel, so I was like ‘Hey Di[ana] pass me the ball’ and she back heeled it,” Brazil said. “It was a great pass.”

Potterveld’s assist was her third of the season which ties the most she has had in a season.

“I think the people who have the most experience are finally starting to step up and lead the younger girls,” Brazil said. “I think that is what we were missing in the first three games.”

Raper scored what would be final goal of the game with 12 minutes to play in the half when she received a pass from Alyssa Brazil to set up the score.

The second half proved to be largely quiet as Bemidji only had one shot and, despite having 11 shots, the Jacks for the most part did not generate many strong opportunities with those shots.

“Although we had a lot of shots in the second half, we didn’t create many quality chances,” Wedemeyer said.

After having only scored two goals in their first three games this year, the Jacks finished the weekend with six goals in two games.

“Our offense had a good weekend,” Brazil said. “We finally started to put some things together and put the ball in the back of the net.”

Also coming together for the Jacks seems to be the midfield game where Brazil and freshmen Julia Lam and Tori Pool have started the last three games.

Despite the successful weekend and strides his team has made, Wedemeyer said there is still work to be done, mainly concerning his team’s focus and consistency.

“We are nowhere near where we need to be right now,” Wedemeyer said. “We just can’t maintain a quality focus for an entire game and that’s something that you would think with some of the maturity we have would be a little better than where it is.”

The Jacks will hope to get back to the .500 mark on Thursday, Sept. 11 when they host Northern State at Fishback Soccer Park at 6 p.m.