Time to get Creative 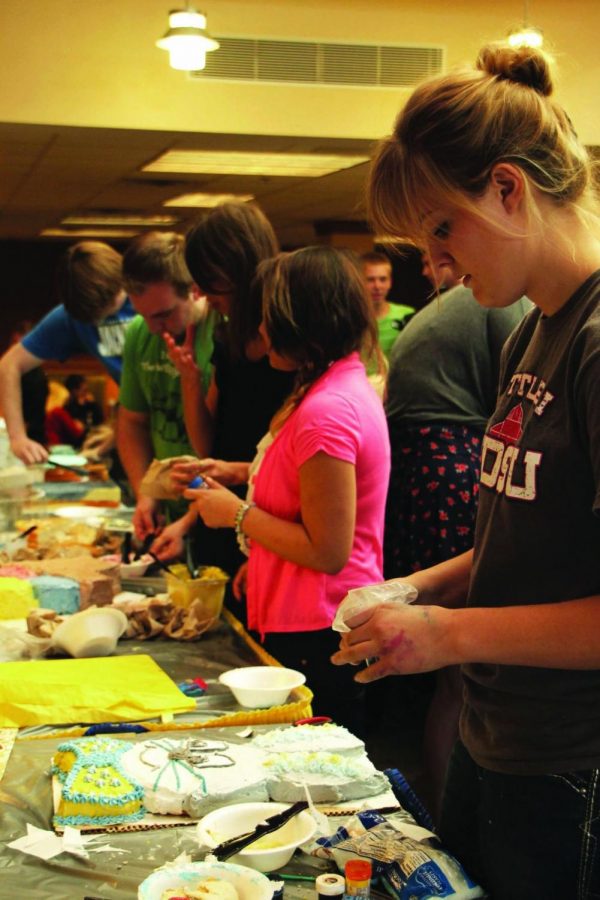 The Union Market area was packed with students participating in a free cake decorating contest on Sept. 24 put on by the University Program Council in order to express the students’ creative side.

The event started at 4 p.m. and allowed contestants four hours before judging began at 8 p.m.

Sarah Ruiz, the UPC Arts Coordinator, said that the event was a way for students to get out, be creative and have fun.

“It’s a great way for students to express their talent through the culinary arts,” Ruiz said.

The contest attracted a total of 46 people and 31 teams to test their hand at decorating cakes. First, second and third place winners in each set won cash prizes for their creations.

In the Amateur set, Taylor Olsen and Alexa Ness took first place with their Owl Cake. Second place was Katelyn Johnson with her Mater Cake. In third place was Flin Ellefson, Morgan Te Slaa and Kira Loftesness with their Freshman 15 Cake.

Winners of the Professional set were Taylor Walker with her In Summer Cake for first place, Abby Evans and Angel Muñoz’ Fun in the Sun Cake took second and in third place was Jennifer Karlsson’s Flower Basket Cake.

Taylor Walker, winner of the professional set and freshman early childhood education major from Sioux Falls, enjoyed the contest and decorating her cake.

“I really enjoy baking,” Walker said. “It’s a stress reliever and it’s really relaxing. I did the contest because I thought it would be fun to participate and to see what others come up with.”

Walker’s In Summer Cake was based off of Disney’s Frozen character Olaf. It specifically focused on his song, “In Summer,” which the snowman imagines what summer would be like. Walker was inspired by her two nieces and cousin who love Olaf. They made a cake similar to the one submitted to the competition.

Walker planned on bringing her cake home last weekend to give to her two nieces and baby cousin to enjoy.

Yara Alkappany, a short-term visitor from Egypt, was also a part of the decorating contest. Alkappany enjoyed creating a unique design for the contest.

“I did the contest because I love cake decoration,” Alkappany said.

Alkappany decorated her cake with purple roses made of frosting.

Ruiz said that the UPC will be putting other events on throughout the semester for students to be involved in. There will also be other events that will allow students to expose their talents like the cake decorating contest.