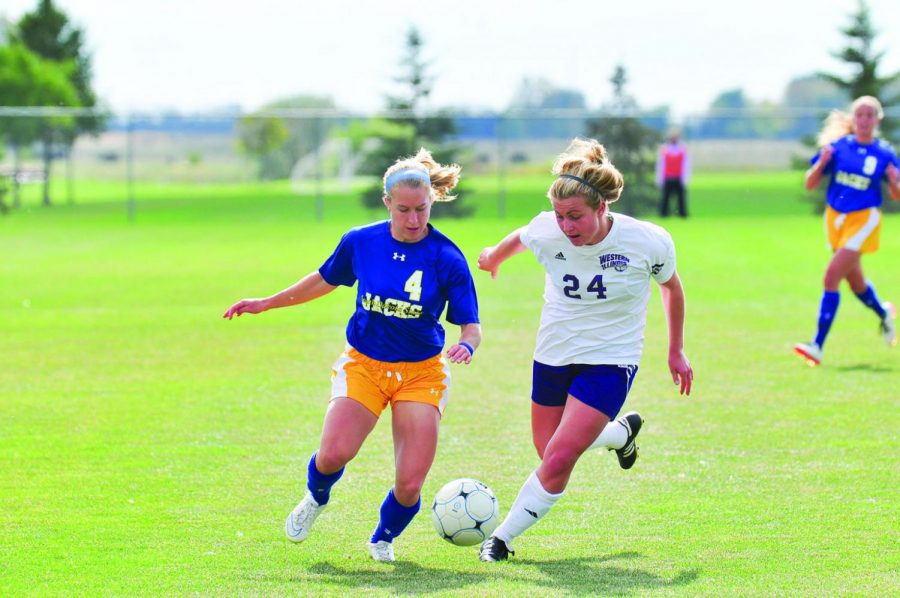 SDSU soccer finished up another climactic victory on Sunday as they rallied from an early goal, scoring in the second half and in overtime to defeat Western Illinois 2-1 and seize first place in the Summit League standings.

“I don’t think it’s just this weekend [that SDSU has discovered a taste for the dramatic],” said head coach Lang Wedemeyer. “We seem to want to make games as interesting as possible – sometimes it works in our favor and sometimes it doesn’t.”

As has happened to the Jacks on several occasions this year, they gave up an early goal when Tyra Markey received a pass ahead of the defense and beat Elisa Stamatakis in the one-on-one to put the Leathernecks up just three minutes into the game.

“I’m more frustrated that we knew that they had [previously] scored some goals exactly how they scored against us and we had talked about it and prepared it, but to their credit they still scored on it,” Wedemeyer said. “So we put ourselves in a hole, but this team is fairly resilient and we find ways to come back.”

The Jackrabbits had a shot to tie it a minute later. Shelby Raper brought the ball in to Diana Potterveld in the middle. Potterveld then passed it back to Raper who swung it to the outside where Nicole Hatcher launched a shot that Victoria Kappel made a leaping save on.

Eight minutes later, Raper had a shot go wide as she attacked the corner of the goal, but lost the angle before she could elude her defenders for a shot.

Such was the story of the game as SDSU kept the pressure on Western Illinois for much of the half, outshooting the Leathernecks 7-5 in the half, but having many opportunities in the box that did not result in shots.

“We just picked each other up and told each other to keep pushing. We knew we could be better and work harder,” said junior defender Delaney Ratcliffe about the team’s attitude as they tried to come back.

With the wind behind them, the Jacks increased the pressure in the second half and they finally found the net on a transition play when Tori Poole passed it up the sideline to Potterveld who found Brazil cutting up the center of the field for a one-on-one opportunity that would tie game.

Though the attack may have lost some of its potency when Wedemeyer gave brief rests to his three forwards, the attack nevertheless continued to the tune of a 13-0 shot ratio in the half.

Late regulation dramatics eluded the Jacks though. In the final minutes shots by Potterveld and Dani Patterson bounced off and over the top crossbar.

Western Illinois won the toss and elected to take the wind at their back in overtime, but the SDSU attack was in their face.

A minute into overtime Potterveld found Poole streaking toward the goal, but she had the ball knocked out before she could get a shot off.

The corresponding corner kick would not be so kind to the Leathernecks. Ratcliffe, who had missed Friday’s celebration as she sat on the training table, received the ball off a pass from Hatcher and fired it in for the game winner that sent the SDSU bench sprinting onto the field in celebration.

“It was amazing – the feeling to just be able to put that last goal in was great,” Ratcliffe said.

While the Jacks were able to come away with the win in the end, Wedemeyer said that many of his players were dealing with fatigue by the end of Sunday’s game, having logged significant minutes in two highly contested games.

Part of the reason that the starters played so many minutes stems from multiple injuries leaving the bench shorthanded, especially at the forward and midfield positions.

“We have a lot of players out right now – just odd things and so we were missing quite a bit of depth,” Wedemeyer said. “We’ve had to play some players off the bench in some different positions but we found a way.”

One player taking advantage of the openings is Hatcher, a freshman out of Sioux Falls who started both weekend games at forward.

“Nicole was fantastic in preseason,” Wedemeyer said. “She suffered an injury that kept her out for a good portion of the nonconference and so it’s nice that she’s starting to get back into the flow of things.”

SDSU now hits the road for a game against Fort Wayne on Friday at 5 p.m. before returning home to host Oral Roberts on Sunday at 1 p.m.