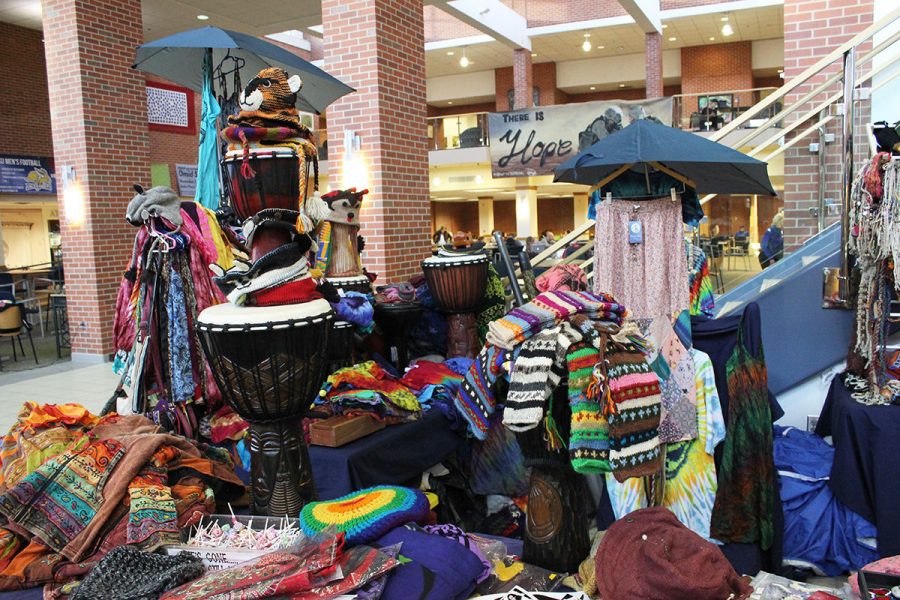 The University Program Council is partnering with Ed Merritt to raise funds to support events on campus.

Ed Merritt, aka “the sweater guy,” is on campus from Nov. 17 through Nov. 21. According to Merritt, most of the products for sale on Main Street of The Union are made by hand and are mostly organic. The products are carried by the business High Country.

According to Merritt, he has been coming to campus for a few years. His opportunity to come to campus came slowly. SDSU had a “sweater lady” on campus when Merritt first attempted to come to campus. After she retired, Merritt was able to come to SDSU to sell his products.

“I value the opportunity to come back,” Merritt said. “The people are so kind here so I enjoy coming here.”

Merritt said that when he was around four years old his older cousin came to visit and taught him to make homemade jewelry. He also learned how to blow glass at a young age.

According to Merritt, when he was 10 years old his family was on vacation where he saw people instructing a glass blowing class. After the class, the teachers sent him care packages and a torch so he could practice the skill at home. Merritt practiced blowing glass outside of his house on his driveway.

“My parents didn’t want me anywhere near the house with fire,” Merritt said.

Merritt credits his hardworking attitude to his father. Merritt said that his father taught him to “put more in than you take out.”

Merritt also has a passion to sell products that can not be used to harm somebody.

“I don’t want to make something that someone can hurt themselves with, like glass pipes.” Merritt said.

Sarah Ruiz, sophomore double major in advertising and French, is the coordinator of the event for UPC. Ruiz said around 10 percent of Merritt’s sales are donated to UPC. In previous years, Merritt has received a good response from students.

“Students love having him around, they either love his stuff or love him,” Ruiz said. “They will talk to him and they enjoy it. So they like to have him around and he likes talking to students too.”

Sophomores Miranda Schwank, a studio arts major, and Kelly Sutko, a biotechnology major, were shopping at the booth together after learning of its return.

“I love the style personally, it fits me a lot and I get excited when its here. I walked in here and I was like ‘Oh it’s back!’” Schwank said.

Schwank said that the products are nice and unique and she intends to buy Christmas presents from the booth.

Sutko said it’s nice to have an option to purchase items at The Union that isn’t related to a club or organization.

“It’s nice to see the organizations and stuff but sometimes you just kind of want to see something more unique without it being shoved in your face,” Sutko said. “He’s not coming up and saying ‘Look at this stuff.’ It’s more relaxed than sometimes clubs can be.”