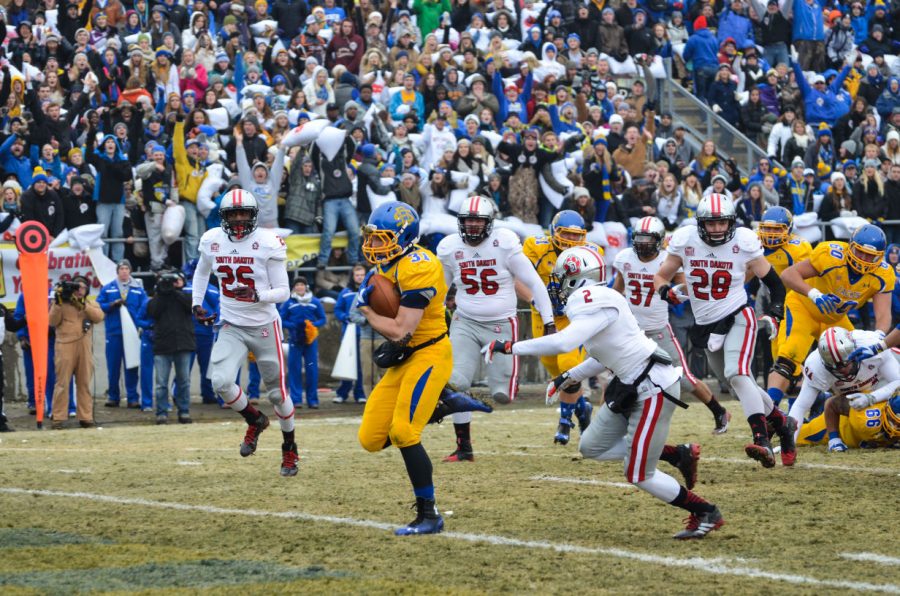 Zach Zenner refused to allow his senior season to end as he carried the Jackrabbits past Montana State 47-40 on a cold and snowy Saturday afternoon in Bozeman, Mont.

“This is Jackrabbit weather,” Zenner said. “We love playing in this stuff.”

After electing to leave the regular season finale against USD in the third quarter to rest up for the Bobcats instead of staying in the game in pursuit of big stats, Zenner turned in one of his finest performances, finishing with 252 yards and four touchdowns on 23 carries. He also caught two passes for 72 yards and a touchdown.

“When you get the ball in his hands good things can happen and he had a whale of a game, a tremendous game, and I’m proud of him,” said head coach John Stiegelmeier. “He is one of the many guys on our team I’m proud of.”

The Jackrabbits leapt out to an early lead less than a minute into the game following a big kickoff return by Trevor Wesley. After Wesley made a reception on a 10-yard out pattern to start the drive, Zenner did the rest, breaking free for a 45-yard touchdown run.

“We went fast,” Zenner said about the play.  “We thought that was going to be good for us and everyone kind of washed to one side. I cut it back and … I was able to get a hand on him and then just run away from some of those guys.”

Their second drive of the game followed much the same pattern as the Jacks countered a Bobcat touchdown with a 69-yard swing pass from Austin Sumner to Zenner.

“I was surprised at how many two, three play possessions we had,” Sumner said.

MSU would get their first stop on the next Jackrabbit possession, forcing SDSU to settle for a Justin Syrovatka field goal from 21 yards out.

In the second quarter MSU tried to get something going on a fake punt when facing a three and out. The pass caught the Jacks off guard and earned the first down, but once again the Jackrabbit defense would force a fourth down, this time resulting in a punt.

Regardless, the second quarter saw the momentum tip back toward the Bobcats. After a running into the punter penalty denied them their first three and out, their defense would get another stop, setting up a scoring drive to close the gap.

SDSU answered with another long return for Wesley and a pair of tough runs for Zenner to cap off the three-play drive with a touchdown.

Then with nine seconds to play in the half, MSU struck again but missed the extra point, allowing SDSU to take a 24-20 lead into the half.

The teams traded touchdowns to start the half, as Zenner found the end zone for the fourth time. Following these scores though, the defenses took over as temperatures dropped and snow increased.

SDSU finally struck again with a long drive to start the fourth quarter, cumulating in Sumner finding Conner Landberg on the fade for his first career touchdown to go up two scores.

“When you believe in young men and you put them out there and they know you believe in them, they will, I’ll use the term, surprise you and it was really special for him to get those plays,” Stiegelmeier said of Landberg.

When Jake Sherlock forced a fumble that was recovered by T.J. Lally inside the Bobcat 20 and set up a field goal, it looked like the game was over but MSU found new life as the Bobcats marched down the field for a Chad Newell touchdown, his fourth of five on the day, cutting the gap back down to eight.

Zenner would have nothing of the comeback though, breaking loose for a 69-yard touchdown run to all but seal the deal.

The Bobcats would score on the ensuing drive but with a minute left they were unable to recover the onside kick despite briefly getting their hands on the loose ball, allowing Sumner to finish the game by taking a knee.

Sumner finished the game completing 19 of 28 for 249 yards and two touchdowns. His favorite targets this year, Jake Wieneke and Jason Schneider, each finished with four grabs while Wesley lead the team with six receptions.

“I thought Austin did a nice job. I thought our wide receivers in this weather made some really nice catches,” Stiegelmeier said.

With the win, the Jackrabbits advance to the second round of the FCS playoffs for the third straight year, this time facing a familiar foe in NDSU who pulled away from the Jacks late when the two teams met earlier this year in Fargo.

That loss was Sumner’s first action at quarterback since suffering an injury early against Missouri in the season opener. Since that loss, the Jackrabbits are 4-0 and Sumner seems to be getting better with each game, setting up a very balanced SDSU offense for that game.

“We’re going to have to be ready to play the best football game we’ve played ever here, and I promise you we’ll be ready for that,” Stiegelmeier said.