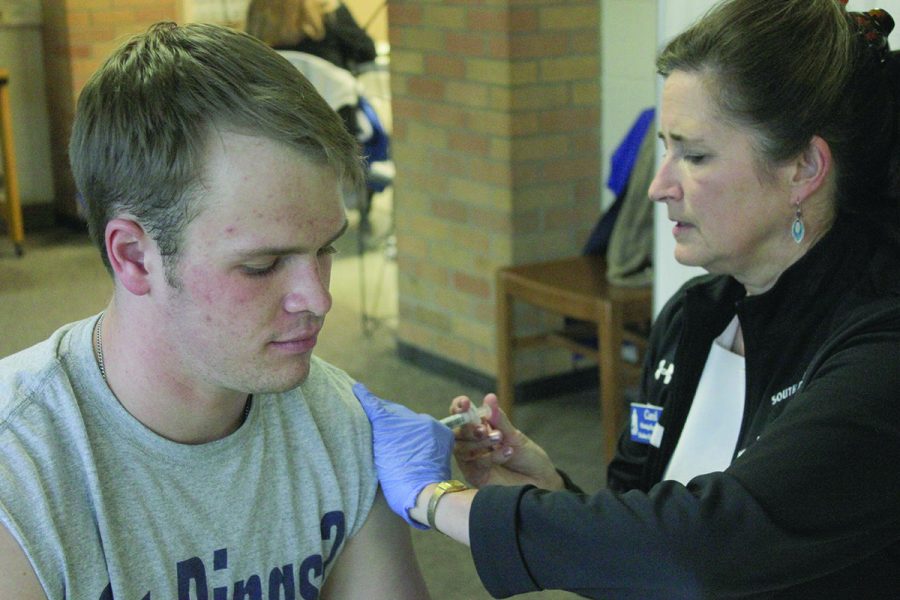 SDSU being proactive in prevention

Measles is a highly contagious virus that can be transferred through the air up to two hours after an infected person was present.

Because it is a highly contagious disease, even one case of the measles on campus could be considered an outbreak, according to Brenda Andersen, associate director of the Student Health Clinic and Counseling Services at South Dakota State University.

At the University of Minnesota Twin Cities campus, a 20-year-old student was diagnosed with measles after traveling internationally. His vaccination status has not been released.

The student could have exposed over 3,000 students and faculty to the measles according to David Golden, director of Public Health and Communication at the University of Minnesota Twin Cities.

On SDSU’s campus, the health clinic is equipped to handle this type of situation, according to Douglas Wermedal, Vice President of Student Affairs at SDSU.

“We have the only operating student health clinic, that’s operated directly by the institution itself in the state of South Dakota. We’ve got a pretty well prepared response to this,” Wermedal said. “We also communicated with all of our students who were unvaccinated who had either religious or medical exclusions, and said ‘Look, there’s been a case in Mitchell, there’s been a case in Sioux Falls, if indeed there were a case on campus it could lead to changes in your access, what do you want to do?’ And several of those folks decided that they would get vaccinated.”

There are less than 20 students on SDSU’s campus waiting to receive the second dose of the MMR. Wermedal said that in a short period of time noncompliant students will be non-existent on campus.

According to the Centers for Disease Control and Prevention, the complete two-dose MMR vaccine is about 97 percent effective at preventing measles if exposed to the virus.

According to Andersen, she has the names of each student at SDSU that is noncompliant with the MMR.

Both SDSU and the University of Minnesota require enrolled students to receive the measles, mumps and rubella (MMR) vaccine, but SDSU students can be exempt from the MMR vaccine for religious reasons and health reasons. In Minnesota, students can also be exempt by choosing to be a conscientious objector.

“There are two reasons why somebody may not be vaccinated on our campus. If the person can’t get the vaccine for health reasons, then we will need a note from their physicians…and conscientious objectors, they have to sign off on it and it has to be notarized by a notary.” Golden said about the University of Minnesota Twin Cities.

Because the majority of our society is vaccinated, Golden said,  the importance of receiving the vaccination has been less emphasised.

“We’ve grown accustomed to having the privilege of having a highly vaccinated community. Chances are good that people around now have never seen measles because we have benefitted from the vaccinations,” Golden said. “You forget how bad it could actually be and you can have some serious outcomes from getting measles.”

In more serious cases, measles can cause pneumonia, brain damage, deafness and, in rare cases, death.

Joanie Holm, a certified nurse practitioner at Avera in Brookings, recalls when she was diagnosed with the measles when she was young.

“It was kind of funny because I have two sisters and all three of us had it at the same time and we had one big bedroom with three beds so we were all sick and I remember that our eyes hurt and we had the blinds pulled. I was really little, but I do remember that,” Holm said.

According to Holm, treating somebody with the measles is mostly supportive care with fluids, pain relievers and fever reducers.

“There’s no magic to it, it’s just making sure they are comfortable and have nutrition during their sick phase.” Holm said.

When measles broke on the University of Minnesota Twin Cities’ campus, the ill student was put into self-isolation, according to Golden. The student infected with measles was excused from classes until he recovered.

If there was an outbreak on SDSU’s campus, the school would handle it similar to how they handled a mumps outbreak on campus years ago by excluding noncompliant students and faculty from campus, according to Wermedal. The excluded students’ coursework would be handled on a case by case basis.

“There would be some students whose course work might allow for sort of a distance completion of the semester, other students might be able to complete part of their coursework and take the balance of the coursework as an incomplete,” Wermedal said. “We’d sure look at ways to complete the existing semester and put the priority on that before we would ever go to a place of not completing it all.”

SDSU’s Health Clinic took preparations for an outbreak a few weeks ago after several cases were reported in South Dakota.

“I hope we don’t see it [measles],” Andersen said. “I just really thought it’s a matter of when we’re going to have a case.”