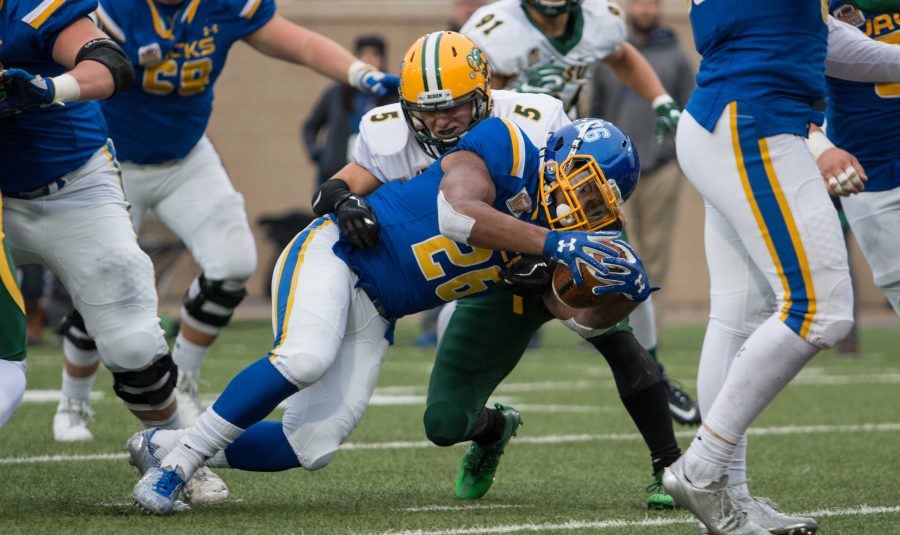 THIEN NGUYEN Sophomore Mikey Daniel dives for a touchdown during the game against NDSU Nov. 4. The Jacks beat the Bison 33-21.

Heading into last season, sophomore running back Mikey Daniel was third on the depth chart and wasn’t thought of as a player who would make an offensive impact for South Dakota State.

Flash forward to this year. If you had an SDSU fantasy football team, you would want Daniel as the running back on your team. He has 381 yards and nine touchdowns this season.

This year, Daniel has shown he is not just a red zone running back. In every game but one, Daniel has been able to break off a run of 10 yards or more.

“We as a coaching staff last year saw [his potential] the game before Missouri State and he got the opportunity to be put in that position and excel during that game,” Johnson said. “Then he got hurt, so it was kind of a blow for everybody. Especially him.”

In that game, Daniel had two touches and one of them was converted for his first career touchdown.

Two carries for 10 yards and a touchdown seem like nothing now for Daniel. He has found his way into the endzone at least once in each of the last five games.

There is a spectrum of running backs for the Jacks, but Daniel might be the most versatile of the three. Junior Isaac Wallace is more of a speed back who doesn’t make many cuts, while senior Brady Mengarelli makes numerous cuts per run.

“He’s [Daniel] in between Brady, who will make ten cuts per run and make guys miss, and Isaac, who will take one cut with long strides,” said head coach John Stiegelmeier.

Daniel’s running style is no secret. He runs at you and tries to run through by putting his head down.

“Mikey brings a violent running style. That man is 6-foot and 220 pounds,” Johnson said. “He has a knack for finding holes with decent speed and great vision.”

Daniel found his running style by watching NFL running backs. He said his favorite running back for years was former Cleveland Browns running back Trent Richardson, who would run over people. Now, he said he has started to watch Le’Veon Bell, who plays for the Pittsburgh Steelers and shows patience for holes to open up.

“I know they aren’t the same by any means, but those are the two I try to imitate,” Daniel said.

With Daniel only being a sophomore, Stiegelmeier said the sky’s the limit for his potential.

“It’s a huge success story with what he’s doing with his age,” Stiegelmeier said.