Swim and dive teams travel to Minnesota Challenge for tune-up 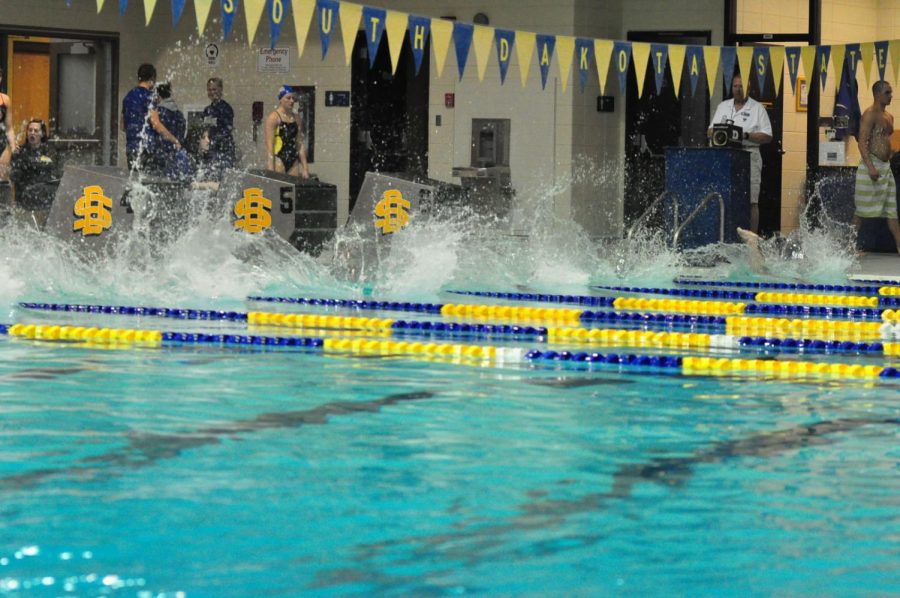 The SDSU men’s and women’s swim and dive teams traveled to the University of Minnesota for the Minnesota Challenge in their last tune-up before the Summit League Championships and came away with two relay wins on the men’s side and an individual victory on the women’s.

“We had some good swims. We had some people that had     lifetime best swims, which was surprising, but we’ll take it. We still had some illnesses that prevented some people from          doing what we had hoped they could do. We had to leave one                         person home with the flu, but it’s just that time of year where that’s  going around,” SDSU head coach Brad Erickson said. “The thing that we wanted to find out for some people was a third event. It was a chance for people to establish or maintain a relay spot. We accomplished what we wanted to at the meet, and it was just kind of a tune-up for the championships in two weeks.”

“He dove really well. Diving is a thing of its own depending on who the judging panel is. It was a fair panel there, and I think that’s going to be a little more representative of how  conference will be scored,” Erickson said. “If you compare what he did this week at Minnesota to what he did at conference last year, his scores were a little bit better this weekend, so I think he’s on track to have a really good meet.”

For her to do that was a good thing. She had a good time. Not as good as what she had at Jean Freeman (at Minnesota) back in December, but it was a good solid representation.

With the Minnesota Challenge in the books, the Jacks have a weekend off of competition for some well deserved rest before they head to the Summit League Swim and Dive                             Championships in Indianapolis, Feb. 18 through the 21.

“We beat them up pretty good the last five months. There’s a lot of yardage behind them. I think they’re looking forward to getting that rest, getting back to one-a-day practices, reducing that yardage and just having that taper effect take over,” Erickson said. “They’re all looking forward to having a body that isn’t so beat up and having the opportunity to swim fast.