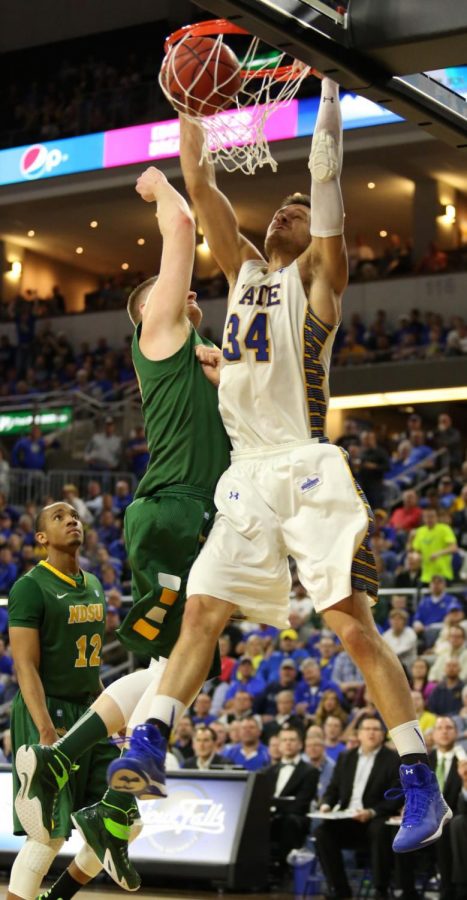 The South Dakota State Men’s Basketball team’s season ended Friday after they fell to the Vanderbilt Commodores 92-77 in the second round of the National Invitational Tournament at Memorial Gymnasium in Nashville, Tenn.

Both teams came out running and gunning in a very up-tempo first half in which neither team could pull away.

“I thought the first half we weren’t very good offensively, it was a miracle that we were only down six points,” said Head Coach Scott Nagy. “The second half we came out and played and we were in the game and honestly they hit shots that we were OK with them taking and we thought we contested them pretty well and they just made them.”

During that 23-4 run in the second half, the Jacks gave up five three pointers and the Commodores finished with a total of 12 threes. Vanderbilt shot 58 percent from the field for the game and went 18-22 in the second half shooting 82 percent.

“In my entire career I don’t think I’ve had a team shoot that well in a half,” Nagy said.

This game was seniors Cody Larson and Zach Horstman’s last game in a SDSU uniform.

“When you look at the number of games they’ve won since being here, you could argue that they are some of the most successful seniors we’ve had here,” Nagy said. “I think we’re gonna miss those guys even more just because of the friendships they had with the players.”

Larson scored 18 points and grabbed 10 rebounds to give him a double-double in the last game of his college career.

“He came here with a cloud of doubt over him, if he could be the guy he was athletically and the decision making off the floor, but he’s been a wonderful straight A student and a good teammate,” Nagy said.

The Jacks did win one game this postseason as they knocked off the number one seeded Colorado State Rams in the first round of the NIT. This win could be huge for the program as it is South Dakota State’s first postseason win since becoming a Division I program in 2004.

“I think this was one of the biggest wins in program history, to beat a top 30 RPI team in a nationally known tournament and it spoke volumes for the program of where we’re going and what we’re trying to do,” Nagy.

The Jacks only lose two players heading into next season meaning expectations should be high for this team.

“They’re high. You win that Colorado State game and that’s makes them that much higher in terms of what our players think they can do and we certainly won’t be afraid of anyone we play,” Nagy said. “We’ll be very solid at the guard position and we will need some people at the Center position to develop and play better.”