#FTK: State-A-Thon dances for the kids 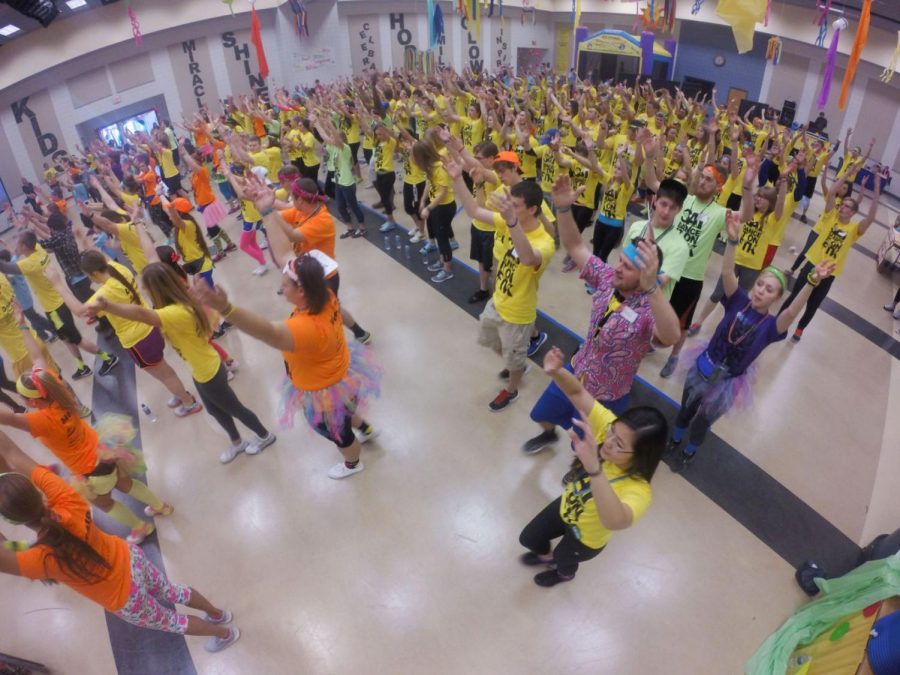 Dancing, games and stories of victory took over The Union for the 2015 State-A-Thon.

State-A-Thon is the yearly dance marathon that took place in the Volstorff Ballroom on Saturday, March 28 from 10 a.m. to 11 p.m. This year $88,072.29 was raised for Children’s Miracle Network.

Throughout the day there was a variety of different activities including: a game extravaganza, performances by the SDSU men and women’s step teams, face painting, a hypnotist and time for State-A-Thon participants and miracle families to interact.

Jenna Mohlenhoff was part of a miracle family. She attended the event because of her daughter Ona.

“We’re very big advocates of Children’s Miracle Network,” Mohlenhoff said. “We’ve gotten a lot of support and help from them.”

Mohlenhoff said her family was invited to the dance marathon and she originally didn’t know what it was; this year was their third year attending.

“The biggest thing is that it’s a day of fun, of celebration,” Mohlenhoff said. “One of the things you hear is we dance for those who can’t.”

Everyone was dressed in brightly colored t-shirts with a phrase across the back. Miracle, facilities, alumni, dancer, UPC and morale were the different groups of people represented on Saturday.

Lexi Fokken, a sophomore business economics major and a member of the Dance Club, sported yellow as a dancer for State-A-Thon. She said that she wanted to participate at last year’s dance marathon but she had conflicts.

Fokken and the other members of Dance Club’s executive board decided to take part in this year’s event.

“Since we are dancers also we thought why not take part in State-a-thon,” Fokken said. “It’s very touching to hear all of their stories and be able to interact with these families and particularly these young children. It’s wonderful to know that we’re helping them directly.”

Participants who could be seen wearing bright green were part of the facilities team who decorated all of the rooms in The Union. Jacob Ailts, a junior entrepreneurial studies major, said this was his first year at State-A-Thon.

“[State-A-Thon is] definitely something that opens your eyes to what other people are going through,” Ailts said. “To really listen to the stories of the children who are going through some hard times, it really opens my eyes to the world around us … and seeing the difference that we can make as students in the lives of the children and the families we help … really make a difference in the world.”

“One of my biggest connections is the families,” McConnell said. “It’s like being a part of their family almost.” She also encourages people to attend the event next year and to be a part of the events leading to next year’s State-A-Thon.

Throughout the day, attendees could be heard saying the phrase “It’s for the kids” and the hashtag #FTK was used on different social media outlets. A live stream of the event was also created for people who couldn’t physically be in Brookings.

Morale and Super Morale leaders could be seen with the miracle families; bright orange helping blue to have a good time.

Nikki Heeren, a senior pharmacy major, was a super morale leader. There were four people in this position; they were in charge of helping and supporting the different miracle families and other moral leaders.

“[State-A-Thon is] just life changing and inspirational and it makes you want to participate and contribute more and give all you can,” Heeren said. “The small change you get and a few dollars here and there adds up to the big picture in the end so every donation counts.”

In the midst of large amounts of yellow and orange, dark purple shirts could be seen scurrying around with black headset: members of State-A-Thon’s executive committee.

The overall coordinator, Michelle Albert, a senior human development and family studies major, was happy of how the event turned out.

During the year, Albert and the executive committee had other fundraisers such as tip nights at various locations in Brookings, babysitting fundraisers, miracle week in the fall and dancer appreciation week in the spring.

“This year [during dancer appreciation week] we tried a one day push where our goal was to raise $10,000 in 24 hours and we raised $17,000,” Albert said. This was the first time the committee has done that fundraiser.

Each year the committee has to look at the fundraisers and events and see what can be improved for next year.

“Overall, everyone worked really hard and had great attitudes,” Albert said. “The overall hard work of the board, I’m really proud of them.”