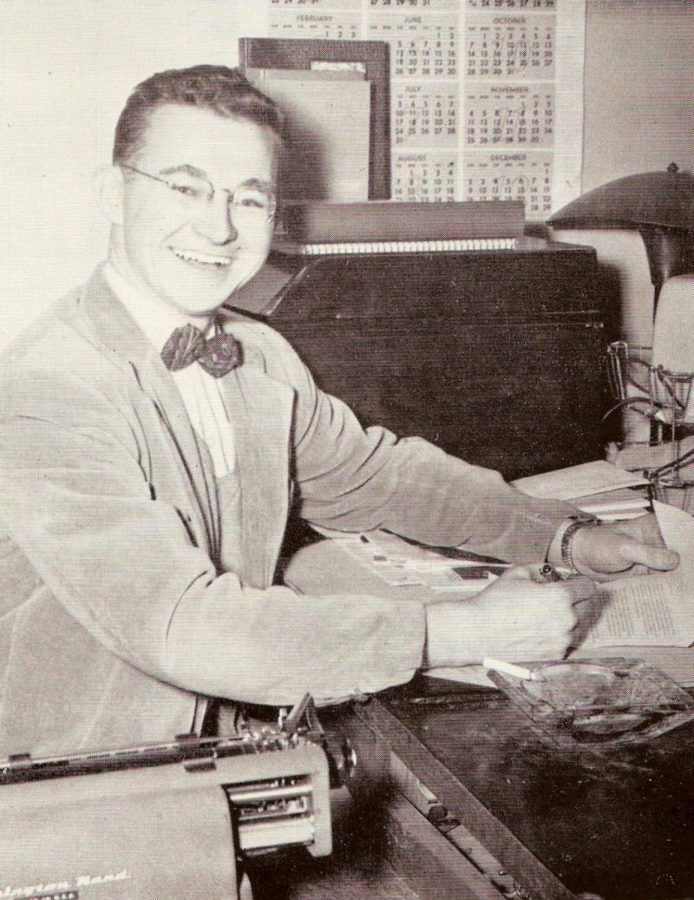 Portraying the Hobo Day character “Weary Wil,” serving as Students’ Association president, and working as editor-in-chief of The Collegian are all singular positions SDSU students may aspire to fill during their time on campus. Conahan filled all of these roles as an undergraduate at SDSU.

According to Nick Wendell, director of student engagement, Conahan was the first person to portray Weary Wil in 1950 and the only man to play Wil twice, returning to the role as an alumni in 1955. Conahan also remains the only Weary Wil to serve three terms in the South Dakota Senate.

Conahan’s legacy remains with the Hobo Day Committee to this day, Wendell said.

“Members of the Hobo Day Committee commit his name to memory…he was the first in a long line of Hobos who were honored as Weary Wil. Many student leaders came after Walt and did incredible things for Hobo Day, but Walt was the first. Hobo Day is better because of students and alumni like him,” Wendell said.

According to Richard Lee, friend of Conahan and former head of the Department of Journalism, at SDSU Conahan could be easily recognized as a student.

“He left a tremendous number of marks at South Dakota State, … he was, in the early 50’s what you would call ‘the BMOC’, the big man on campus … he was into everything, student government, the newspaper, the Blue Key, an organization on campus at that time, the Printonian Club, Weary Wil,” Lee said. “Then he served for a considerable number of years in Washington working for a series of representatives and senators, and then came back and the foundation kind of took off, and with it the university really began to grow.”

Conahan’s involvement and service to SDSU didn’t stop as an undergraduate, he continued to remain connected to the university as an alum and as the first full-time director of the SDSU Foundation. Conahan served as director for 13 years.

“The mark that he left on SDSU is certainly the SDSU Foundation…it’s a large organization that aids SDSU and it certainly started with Walt, we didn’t have a foundation before that and it started with Walt and built a wonderful organization,” Keith Jensen, a 1956 SDSU journalism program graduate and former director of the SDSU Alumni Association said.

Conahan could be recognized for his positive attitude. According to Lee, a quote in the story “Weary Willie: A hobo comes to life, honored in bronze” by Chuck Cecil, published in the Fall 2011 issue of STATE Magazine captured Conahan’s personality perfectly, calling him “an exuberant, jolly, and jaunty Irishman with an infectious smile and a catching Irish chortle.”

“He was just a marvelous, outgoing, cheerful person, always happy, always with a smile, always with a can-do attitude, and because he was a journalism grad and I was head of the journalism department there were a lot of things we could do together” Lee said.

In his work in Washington, Conahan never forgot SDSU and was “invaluable” in his work with the legislature for areas affecting SDSU, Jensen said.

“He’s one of those rare individuals who has both the abilities and the character to be a wonderful human being, he was wonderful to get along with, diligent in his work ethic, and just had a major impact on not only SDSU and Brookings, but on the process when he served in Washington, D.C.,” Jensen said.

“The fact that he never forgot that he was from SDSU, it was always there and he was always blue and yellow,” Lee said.

Gov. Dennis Daugaard has ordered that flags at the State Capitol will be flown half-staff on Saturday, April 25 for Conahan’s funeral.

The Leola, S.D., native would have turned 88 on Monday, April 20. He had lived with cancer for the past five years.

Mr. Conahan spent 25 years as a senior staff member for the United States Senate, U.S. House of Representatives, U.S. Commerce Department and National Transportation Safety Board in Washington before returning to South Dakota to serve for 13 years as the first full-time director of the South Dakota State University Foundation and director of University Relations.

Mr. Conahan was an effective mentor, gifted teacher and confidante to contemporaries, colleagues and other “students” who emulated his qualities. Friends and admirers said Mr. Conahan was widely respected for his wisdom, his judgment, his love of life, his optimism, exemplary character, his decency, kindness and humility. Many of those who learned from Mr. Conahan’s example, successfully applied those lessons in their personal lives and their careers as government, business and community leaders.

Mr. Conahan was born April 20, 1927, to parents Nina (Martinson) and Perry Conahan in Leola, S.D., where he, and his younger brother, Lee, grew up in the restaurant business, living in their home on the second floor of the restaurant building, Perry’s Cafe.

He was a 1945 graduate of Leola High School, a member of the student newspaper staff, and a reserve on the 1945 Pirate basketball team, which won district and regional championships to enter the State “B” tournament at the Corn Palace in Mitchell. While in high school, he also was a reserve on the 1943 Leola American Legion junior baseball team, which won a berth in the state tournament by defeating Aberdeen and Selby.

After high school graduation, he volunteered for the draft and entered the U.S. Army in September 1945. His service included several months at Fort Snelling, Minnesota, and basic training at Camp Crowder, Missouri, where he received the sharp shooter medal for proficiency with the M-1 rifle. He then was enrolled in Finance School at Fort Harrison, Indiana. He was deployed to the Philippine Islands, serving under overall command of General Douglas MacArthur, at the time the Philippines achieved its independence from the United States, on July, 4, 1946.

Upon honorable discharge from the Army, and a subsequent enlistment for eight years in the U.S. Army Reserve, Mr. Conahan returned home to Leola. He was immediately named the manager of the Leola Independent basketball team, which won the State American Legion tournament in 1948, and finished as runner-up in the State Independent tournament.

Upon earning a Bachelor of Science degree from SDSU in 1952, Mr. Conahan became associate editor of the Clear Lake Courier operated by publisher T.R. Burgess, one of the legendary South Dakota weekly newspaper owners, where he worked for three years.

In 1954, his father, Perry Conahan, died. Walter and his brother, Lee, who had just graduated from SDSU, agreed Lee would assist his mother, Nina, in temporarily running the family restaurant in Leola. A year later, their mother decided to continue in the café business. Lee left for a position with the Brookings Register; Walter returned to Leola. While in Leola, Walter frequently drove to Chamberlain to assist in preparing the Chamberlain newspaper’s edition observing that community’s 50th anniversary.

Later positions in the Nation’s Capital included: service with New York Congressman R. Walter Riehlman; 14 years as press secretary for South Dakota U.S. Sen. Karl E. Mundt; three years as chief of staff for then-Rep. James Abdnor; and assignments in the federal Executive Branch. He was the executive director and later acting co-chairman of the U.S. Commerce Department’s Old West Regional Economic Development Commission. Prior to returning to Capitol Hill to join Congressman Abdnor’s staff, he was the legislative affairs officer for the National Transportation Safety Board. Mr. Conahan also was vice-president of the U.S. Senate Press Secretaries Association. Mr. Conahan’s distinguished government service earned him recognition by the publication “Who’s Who in Politics.”

Walter Conahan married Marjorie Dean of LaMoure, N.D., in 1957. Marjorie was a member of the North Dakota U.S. Sen. Milton Young’s Washington staff when she met Walter. Their daughter, Christy, was born in 1958 in Washington.

In 1978, Mr. Conahan became the first full-time executive director of the SDSU Foundation and director of development for SDSU. Near the end of his 13 years there, an additional responsibility was added when he was named director of University Relations.

While at SDSU and living in Volga, Mr. Conahan was elected to the State Senate in 1982. He was elected to three terms to the Legislature, where he served as vice-chairman of the Judiciary Committee. He ran for his third term without opposition.

Mr. Conahan was a member of First Presbyterian Church in Sioux Falls, serving on the Archives Committee and writing for the monthly newsletter. He was a Paul Harris Fellow in Rotary International, former president of the Brookings Rotary Club and a past board member of the Sioux Falls Downtown Rotary Club, where he attended meetings regularly until the week of his death.

Mr. Conahan was on the board of the Karl Mundt Foundation, the Museum of Visual Materials and, previously, on the SDSU Prairie Repertory Theatre board. He joined the American Legion in 1946, affiliated with the Roy S. Hickman Post in Leola. He also had been active in the Brookings Elks Club and the Brookings Country Club.

A fond memory for Walt Conahan was the 1948 Leola Independent basketball team, which he managed. The team of World War II veterans won the State American Legion tournament championship, defeating Rapid City in the finals, and represented South Dakota in the national tournament in Indiana. When the team returned from Rapid City, members of the Roy S. Hickman Legion Post in Leola raised $900 in one day to send the team to Jeffersonville, Ind. Leola’s team also played that year in the State Independent tournament, losing in the championship game to Aberdeen.

Mr. Conahan treasured the opportunities that Leola, his home town, gave him to return to speak at various functions. He introduced Congressman Ben Reifel at one Leola reunion, spoke at the 1976 Bicentennial Year graduation of Leola High School, Leola’s Memorial Day observance in 1989, and later that year at the dedication of the McPherson County Lasting Legacy Monument.

Mr. Conahan leaves a nephew, Cary Conahan, and his wife, Cathy, and their son, Kyle; niece Kay Robertson, and her husband David, and their sons Blake and Chad and niece Kelly Stephens, all of the Houston area. Also surviving are Martinson and Conahan cousins residing in California, North Dakota, Minnesota and Texas.

Other close family members include Elaine Dean Burkett, her husband Bill, their daughter DeAnn Thompson, her husband Earl, all of Illinois, their children and grandchildren and niece Marilyn Dean of LaMoure, N.D.

Mr. Conahan’s late brother, Lee, died in 1997 in Houston, Texas, where he and his family lived. Lee’s wife, the former Jeanette Walth of Leola, died in 2007. His niece, Peggy Conahan, died in 1977. His parents also are deceased.

Memorial gifts may be designated for the Conahan Scholarship Endowment at the SDSU Foundation, 815 Medary Ave., Box 525, Brookings, SD 57007.