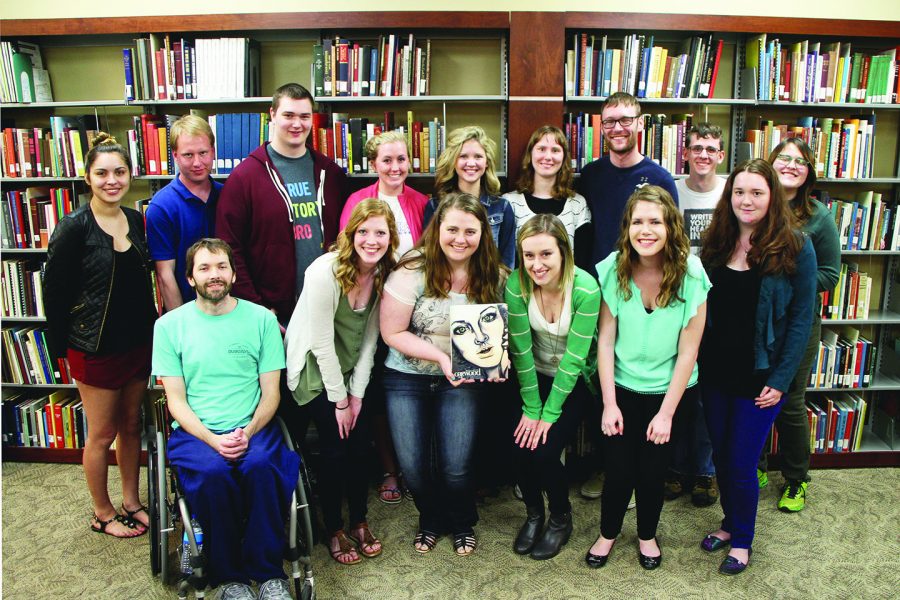 According to SDSU English Professor Steven Wingate, the publication was founded in 1976 as the Calliope and has been published ever since. Oakwood is funded and sponsored by the English department and the Students’ Association.

Wingate said that the magazine primarily focuses on student work; however, at various times it has been open to more than just students. This year, Oakwood was open for submissions from anyone in South Dakota.

The magazine accepts poetry, fiction, nonfiction, drama and screenplays, as well as drawings, photographs, architectural renderings and images of paintings or sculptures.

Overall, Wingate said that 30 students in various majors were represented in the magazine along with two SDSU graduates.

This year the magazine held a banquet last Thursday, April 16, to recognize students published works in the 2015 Oakwood magazine. The reception was held during National Library Week in the archives of the Briggs Library. Free copies of the Oakwood were available, along with refreshments and the opportunity to talk with some of the authors and artists. Several of the authors read one of their published works aloud.

The authors had various reasons for deciding to submit their works to Oakwood. Haley Bradshaw, a senior English major, said that she learned about the publication four years ago when she was a freshman, and decided to submit some pieces. Bradshaw has had her work published in the magazine every year since.

Spencer Kavanaugh, senior English major, learned about the Oakwood his sophomore year when he heard his friends talking about it. In his junior year, Wingate convinced him to submit some of his literary work to the magazine.

Other authors, such as senior English major Robert Meyers, submitted pieces that they worked on for an English class.

Wingate encouraged students to submit some of their creative works to the Oakwood.

“Many, many writers – myself included – published their first works in their college’s literary magazines,” Wingate said. “New writers publishing in venues like this have a very long tradition in the U.S., and it’s often a stepping stone to further publication.” Wingate still has copies of his earliest publications and said that many of the writers will keep their copies.

Kavanaugh said that SDSU’s Oakwood is unique compared to many other undergraduate literary magazines, whereas most university restrict submissions to just those from their English department, the Oakwood accepts submissions from SDSU students of any major.

“That’s something we have that other magazines from my experience don’t have,” Kavanaugh said.

According to Bradshaw, the magazine is a good way to express one’s self.