Gaining a competitive edge for the first professional job 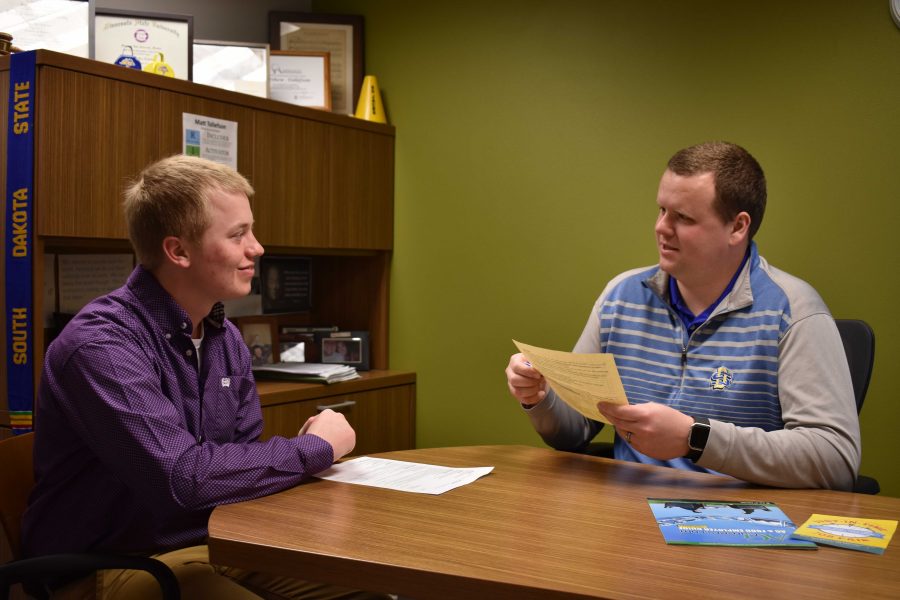 College is a time for self-discovery of what you want to do for the rest of your life. Many students have a dream job in mind, but there is never a set path to take to achieve those goals.

According to a 2013 Liberty Street Economics article, roughly 27 percent of college graduates are actually employed in a career directly related to their degree.

Liz Schuh, a 2016 nursing graduate and working at the Mayo Clinic in Rochester, Minnesota, credited resources at SDSU as one of the main reasons she was able to land a job in her field of study.

“I found it really important to talk to the Career Development Center on campus,” Schuh said. “They helped me answer a lot of questions before I had my interview with Mayo.”

Schuh said her interview for the position was a bit unconventional, but her preparation for it led to her getting the job offer.

“My interview was over a video chat since I wasn’t in Rochester at the time. I reserved a room at the library on campus and had a panel of interviewers from Rochester ask me questions,” Schuh said. “I only had to do one interview since I was so far away, but people applying for that kind of job usually have a couple more levels to go through before they get offered the position.”

It is not very realistic that every college graduate is going to jump into their dream job right after they graduate and Schuh said making professional connections is important — that includes networking with professors, people in your field on campus and at your first job.

“Even though your first job may not be your dream job, someone you may come to know will help you get to where you want to go in the future,” Schuh said.

“If a student balances the in-class and out-of-class experiences, then they will have the whole package and do really well.”

Something that helped Schuh get her first job was her resume. Getting involved in things on campus or in the community that cater to a person’s interests help create a strong resume, she said.

Even as freshmen, students should write down each of their accomplishments, involvement, volunteer hours and “every little thing that you do” so it’s easier to craft a resume, Schuh said.

Stephanie Brown, a career coach in the Center for Student Engagement, is an expert on how to land a dream job.

Her undergraduate experience included playing volleyball for the University of Nebraska-Lincoln where she wasn’t able to get involved in many clubs and organizations on campus, but she drew professional skills from her athletic experiences.

Brown said it’s imperative to master the fundamentals of the employment process.

Not only are those materials important, but so are the experiences within your field of study.

“If a student balances the in class and out of class experiences, then they will have the whole package and do really well,” Brown said.

The resume itself is crucial in landing the first job, and Brown outlined two things she looks for. The first is an error-free finished product, easy to read, clean and organized. The second is making sure it stands out.

“For young professionals, the layout and positioning of the information on the resume is just as important as the information itself,” Brown said. “There are a million ways to do a resume, but if your information does not pop very quickly and fit directly to the job description, you won’t be a match for the position.”

The job interview is where many students tend to fall short. Brown tells students to prepare for the interview in three stages: the before, during and the after.

Before the interview, think about possible questions the interviewers might ask. During, show authenticity and your personality.

“I have met 4.0 students that have had plenty of experience in their field, but if they are not able to verbally articulate that they are fit for the position requirements, then they have lost the game,” Brown said.

After the interview, Brown said it’s important to send a thank you and follow up with them.

Overall, Brown stressed the importance of being yourself.

“The interview is to see how you fit their team, and the best way to do that is to show your authentic personality,” Brown said.

Schuh said even though students may not get the job they want right out of college, it is important that do something.

“Rome was not built in a day, so it’s important that you start somewhere coming right out of college,” Schuh said. “If you do good work and are able to make connections with the people around you, then you will be able to climb the ladder and get to the top.”