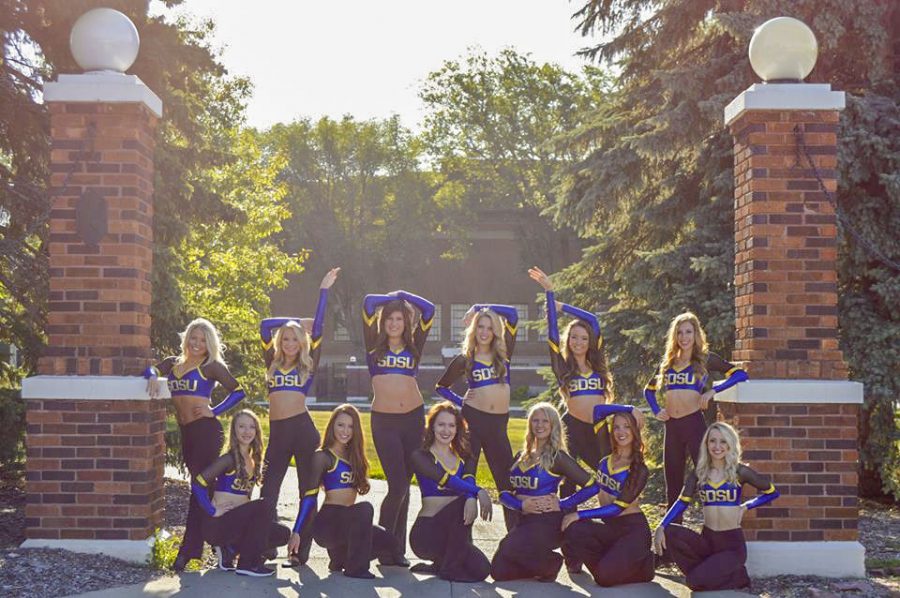 The self-funded SDSU Dance Team proves there is no “I” in team as members raise the funds to keep the dance team performing at football, basketball games and competing in national competitions.

Kara Christopher-Holt, a senior entrepreneurial studies major and captain of the dance team, has performed on the dance team for four years. She said the 14 women on the dance team must raise the money necessary to perform because the organization does not receive money from SDSU.

“[W]e do a lot of fundraisers,” Christopher-Holt said. “We pay for everything we are going to do – going to Nationals, the airfare, the competition fee, everything. Our costumes, we pay for our choreographer, we pay for all of the performance pom poms, pants and shoes.”

The team raised money through several summer fundraisers such as carwashes in Sioux Falls, bake sales, concessions at football and basketball games and partnerships with various restaurants in Brookings.

“[The camps are] probably my favorite fundraising tactic because you just get to know people and you get to share information because I have learned so much being on the team compared to when I was in high school or middle school,” Christopher-Holt said. “It’s so fun to be able to teach [the students] things earlier on.”

While the dance team fundraises for the team, they are also expected to practice their dances, perform and look good while doing so.

According to Christopher-Holt, the dance team practices on Mondays, Tuesdays and Thursday each week and have one team workout at 6 a.m. and “one individual work out.”

Christopher-Holt chose to be on the dance team because dance has been “the biggest part of [her] life.” She performed ballet, lyrical, pom, jazz and hip hop growing up.

Christopher-Holt sent in a video audition when she auditioned for the dance team. Other ways to audition for the team are through the spring and fall try-outs. The fall try-out takes place Aug. 27 at 6 p.m. in the Intramural Building.

“I wanted to continue my passion for dance in college and the SDSU Dance Team was the perfect opportunity,” said Maura Silverberg, a senior business economics major and a member of the dance team for four years. “I can’t forget the girls on my team. They’re my second family at school. I don’t know what I’d do without them.”

“[O]ne thing that I didn’t realize when joining the team that I am so thankful for is how much we … do outside of the team,” Christopher-Holt said. “It’s not just all about dancing or going out there and doing what we learned and what we know, we do so much off the field too.”

When the team is not practicing or performing for competitions, they volunteer. In the past, the dance team participated at State-A-Thon, a 12-hour dance marathon that raises money for Children’s Miracle Network; they also volunteered at the local nursing homes, painting nails and serving meals to the residents.

“We work so hard to make it look as easy as we can and…we just want people to know that we are still passionate about it,” Christopher-Holt said. “We will put in our time and our money and our effort … pretty much all of us would die for this team.”