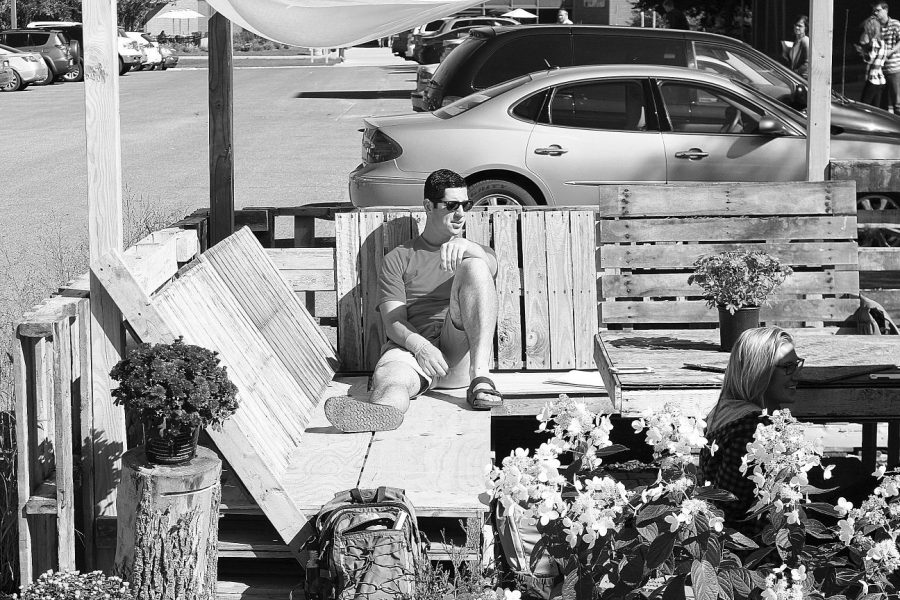 Brady Aldrich enjoys the green space created by his Landscape Architecture class during PARK(ing) Day on Monday, Sept. 21. Matt James, the instructor of the class, hopes to make the event an annual tradtion on campus.

With a minimal $50 budget, one class on campus took two parking spaces in the Wagner lot and reclaimed them as green spaces for a day.

The Parks and Recreational Facility Design class, which is in the Landscape Architecture program, built a “park for a day” on Monday to celebrate PARK(ing) Day.

PARK(ing) Day is a global event that was meant to take back parking spaces and reclaim them as green spaces, said Matt James, the professor of the class.

“It’s a bit of healthy activism and we just want to remind people how important green space is,” James said.

The seven-person class was given two parking spaces for their project and made the most of what they could.

Their new space was located on the southwest corner of the Wagner lot near a fairly traveled sidewalk area, which was what they looked for in a location.

Their theme for the project was ‘Something Old, Something New, Something Borrowed and Something Blue,” which is often used for weddings. Within their park, they included each of those elements.

“Actually getting to physically do your design and implement it from paper to real life is satisfying,” said Alexandra Rausch, a senior landscape architecture major and student enrolled in the class.

The class is going to have a review session to see what James can do differently with his class next year, hopefully making it an annual tradition.

A few years ago, the class tried utilizing a single parking space, but it was not as elaborate according to James..

“It started out as just a bunch of chicken scratch on trash paper one day, but now we’re here enjoying this,” James said.