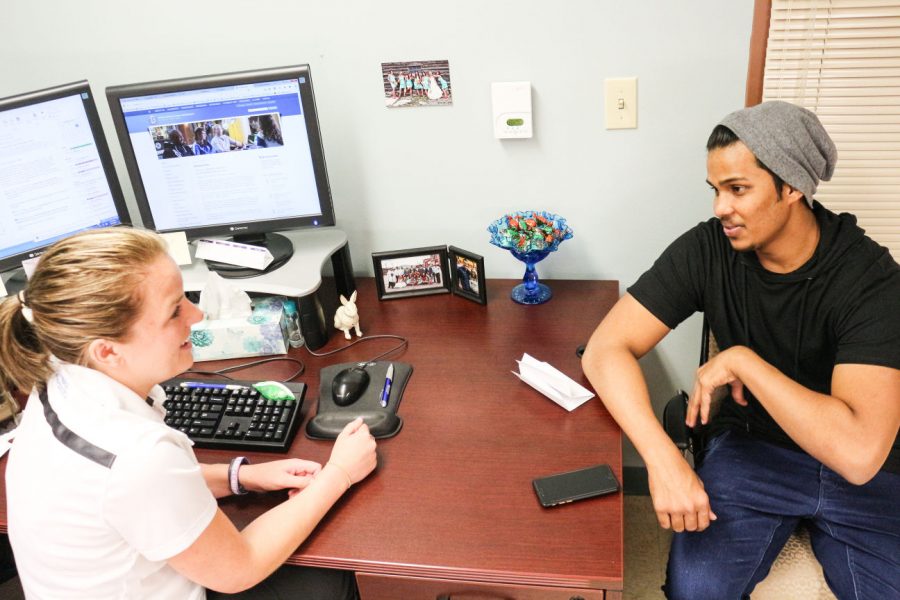 Imagine a college experiece without an adviser. Imagine not having that dependable resource to talk to about next year’s class schedule, registration or to talk to someone about what the future can look like.

Whitney Rederth knows exactly what this feels like. Rederth, now a junior, said throughout her sophomore year she did not receive the guidance she needed or wanted from her own adviser.

“I was placed with an adviser who was in charge of a large portion of SDSU students. Because of this, the adviser only knew little bits of information about each major and program,” Rederth said. “This led to many misguided class suggestions, unanswered questions and awkward advising appointments.”

Rederth sought help outside of her appointed adviser and consulted professors and other academic figures on campus because she was not receiving the guidance she felt she needed. She discovered that she was not the only student of this adviser’s who experienced such challenges. And in other departments, other students found themselves in similar situations.

Makayla Henning, a senior, was faced with a similar situation this year, for which she took matters into her own hands. Henning found out, while she was filling out her graduation application, that her adviser left SDSU. This meant she did not have an adviser to check if she completed her requirements for graduation.

“It’s really frustrating when I call my adviser and he tells me he doesn’t work at SDSU anymore,” Henning said. She found an overall lack of structure with advising in her department.

Contacting the head of her department was challenging, Henning said. She was left with the task of determining where she stood as far as class and graduation requirements and most importantly, why she was not informed about her former adviser’s departure. The department head informed Henning she was missing three requirements for graduation when the two met up. Henning later checked the classes on her own and realized she already fulfilled those requirements earlier in her college career.

“It freaked me out thinking that I wasn’t signed up for a bunch of classes that I needed, but I checked them and already took them,” Henning said.

But, whether it’s faculty advisers, professional advisers or advisers at the First Year Advising Center, each plays an essential role in supporting students through graduation, according to Jody Owen, director of the First Year Advising Center and coordinator for SDSU undergraduate academic advising. Students rely on advisers to help them work through class schedules and graduation requirements, and advisers act as a guide to help students through those situations.

“An adviser’s role is giving advice, giving information and offering support as students make decisions that propel them through graduation,” Owen said.

Some advisers have utilized the Appreciative Advising model since 2013 in order to engage more with students and their aspirations. The developmental and strengths-based model encourages students to use their qualities and skills to achieve their goals, according to Owen. She said Appreciative Advising allows students to explore their goals and aspirations and advisers to get to know their students better.

“We feel more energized at the end of the day having incorporated Appreciative Advising strategies and feel students feel better when they leave our office, because we’re using those appreciative strategies,” Owen said. “I think it’s like anything else when you’re talking about helping people or motivating people to get to that next step or next level. If you can be positive and encouraging instead of point out what the problem is or what they’re doing wrong, you’re more likely to have success.”

Owen said about 300 advisers, including retention advisers, have attended workshops on the model hosted at SDSU. More than 20 advisers have attended the Appreciative Advising Institute itself.

Howard Bonneman, a professor in the Dairy Science Department and faculty adviser, is starting to act as the sole adviser for incoming students in the department. Bonneman currently advises 59 students while teaching six courses this semester. Even with a full plate, he enjoys talking to students and helping them with their course decisions.

“I get to talk to people and see what they want to do, see what their aspirations are, help them navigate those parts of the system they don’t have a choice about and help them through those choices they do have to ensure we get to an endpoint,” Bonneman said.

Bonneman said, historically, the Dairy Science Department appointed several faculty members as advisers, but is now handing them over to one adviser: himself.

“We had been talking about the need to strengthen our overall advising strategy in the department, knowing that we had some holes in the way we had done it,” Bonneman said. “As the overall program grew and we started having more students to put out to those faculty members, it got more challenging and it made more sense to centralize it, but needed to make sure that if we did that well we had a good picture of a model that would do that well.”

Along with handling all incoming students, Bonneman chose to be trained in Appreciative Advising as well. He said he’s found the model resourceful and that it creates a better experience for himself and his students.

“If you follow the Appreciative Advising model, you know more about the student and what they’re trying to get out of their years here, and you help them get there instead of ‘this is what you have to do,’” Bonneman said.

Similarly, the School of Design has directed all of its students toward a professional adviser, opting out of faculty advisers.

When the School of Design was created, the switch to a professional adviser was also prompted in order to meet the school’s accreditation standards according to Steele. With this change, he feels optimistic that the new adviser will be beneficial for the school and the program as well as allow faculty members to focus on their scholarship and research.

According to Steele, professional advisers have a different approach in advising than faculty.

“The professional adviser has the time, means and resources so they can continually receive the training they need, communicate with other advisers on campus and create a collaboration with those other advisers so they can implement the best practices on a regular basis throughout the semester,” Steele said.

In Provost Laurie Nichols’ opinion, professional advisers are a safer choice than faculty advisers because they receive more training and devote the majority of their time to advising students.

“You know, in the long-term I hope SDSU uses all professional advisers,” Nichols said. “That would be my hope in the future, and it’s certainly a direction we’re moving in. Every year, we add more professional advisers … and we’ll keep moving in that direction. So my hope is that all students would have access to a professional adviser. They’re highly trained and they have continuous training, every month we meet and do training, it is their job to advise — they are in their office, scheduling appointments with students, working with them on their plans or changing a major.”

Professional advisers may be more available for students than faculty advisers, said Carla Anderson, coordinator of student services for the College of Education and Human Sciences.

“Students can share concerns with me that perhaps they wouldn’t have if I were also a professor grading them,” Anderson said.

Although Anderson is not trained in Appreciative Advising, she has a training background similar to the approach and found similar results to Bonneman in having students’ goals in mind while advising.

“I take the role of ‘how do we take your skills and your strengths, and how do we transfer them to the workplace to start to get experience and see where that takes you,’” she said.

According to Nichols, Appreciative Advising is a different way to approach students, but she does not necessarily think it is something that can be implemented across campus as of now.

“I don’t imagine that we will ever get everyone to use Appreciative Advising on this campus as long as we have faculty advising, but if we would go to all professional advisers, I think we could get there quite easily,” Nichols said. “The fact that we’re working with so many people is probably the problem. It’s hard to manage everybody. And there are some faculty who advise only five students — I met someone the other day who only advises three. So it’s hard for me to convince a faculty member who’s really busy teaching three classes, they’re doing their research program, they’re advising graduate students; and it’s hard for me to convince them that for three students they need to go to an all-day training. That’s hard to do. For professional advisers, that this is their life, they want to go because this is what they do every day. So it’s a really different orientation and it makes a difference in terms to convince them to even do it.”

Anderson believes her method of advising works well with the more than 300 students she advises each semester. Although she thinks Appreciative Advising is beneficial, she does not think mandating the way advisers advise is the best idea.

“I don’t know that you need to highly suggest someone advise in a certain way … because I think that everyone has their own unique way of working with students,” Anderson said. “I am a fan of Appreciative Advising, but I think that when you dictate how someone should work with students, it is not in everyone’s best interest. So, I think maybe allowing everyone who wants to attend and be trained in it is a great idea, but I’m not sure I believe in the mandate, if it became a mandate of ‘this is the way we do it.’ Because I don’t think it’s the only way and I think there are people on campus who are doing awesome in advising who’ve never even heard of it.”

Overall, both Bonneman and Anderson said that working the ‘nuts and bolts’ and focusing on students’ aspirations and goals were key to working well with students.

“I think there needs to be advising beyond nuts and bolts and beyond advising and mentorship,” Bonneman said. “There needs to be someone who can help the student see what they want to do and see that it can be accomplished … but there needs to also be, with that person who’s helping with the nuts and bolts, a knowledge of connecting those students to specific faculty members in an area of interest.”