New and old Jackrabbits shine in first meet of season 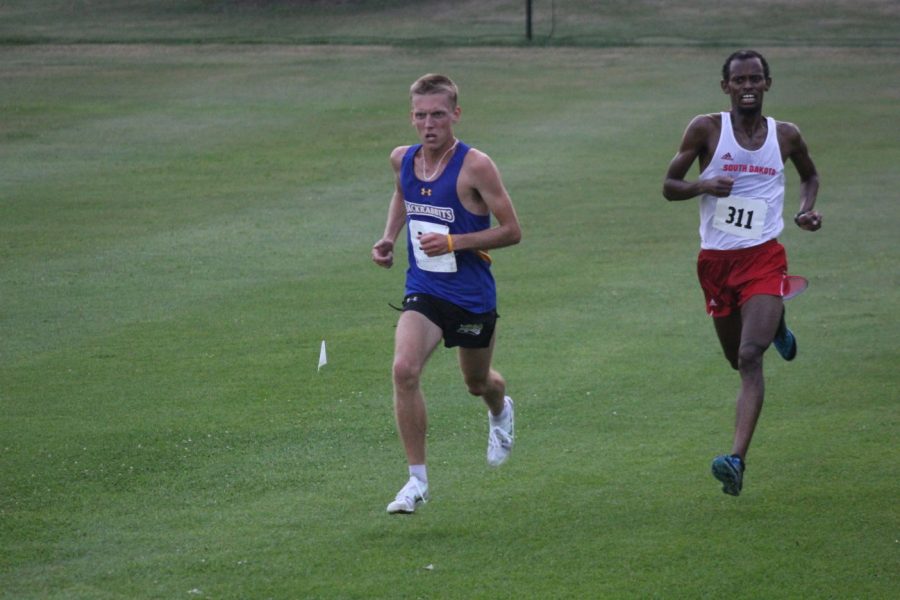 With the anticipation building around the Jackrabbit cross country season, the first meet could be an indication that both the men’s and women’s team have a real shot at winning Summit League titles at home this fall.

This past Friday in Fargo, N.D., the Jackrabbit men’s and women’s teams both had two runners finish within the top five in each meet. For the men, it was junior Brendan Sage, who finished fifth and former Summit League Champion Trent Lusignan. Lusignan, in his first race back from a stress fracture injury in his foot and missing all of last season, finished second in the meet.

“He still has some progress to make. The biggest thing for him is to get reacquainted with everything. It’s been almost a year since he has ran in a competition,” Coach Rod DeHaven said.

With runners like Lusignan, Sage and even former Bison Open winner Joel Reichow on the team, the bar is set high for the men.

“On the men’s side, our expectation is that we have a couple guys that can finish in the top five,” DeHaven said.

On the women’s side, the Jacks had an unexpected boost from their two newest members, Rachel King and Emily Donnay.

“The biggest surprise was the top five finishes from the two true freshman,” DeHaven said. A native of Kimball, Minn., Donnay finished in fourth place and a native of St. Michael, Minn., King came in fifth place.

Of the women’s team’s eight runners who competed, seven of them were underclassman, showing the surprise in how well the Jacks stood against the competition without their veteran runners. Jessica Eibs, an all-first team conference runner last year, didn’t compete.

“We will hopefully bring some more experienced runners into the race when we head to Minneapolis,” DeHaven said.

This is great sign as the women will be looking to take the top spot away from the University of South Dakota and try to jump the Lady Bison of North Dakota State University. In Friday’s meet, the Coyotes had the top two finshers in Amber Eichkorn and Katie Wetzstein, both seniors. The lLdy Bison had the third place finisher in Taylor Janssen, an upperclassman.

The next meet is scheduled for Friday in Falcon Heights, Minn. The Jacks will look to build off the solid performance last weekend and keep progressing toward the end goal: winning the Summit League in Brookings.