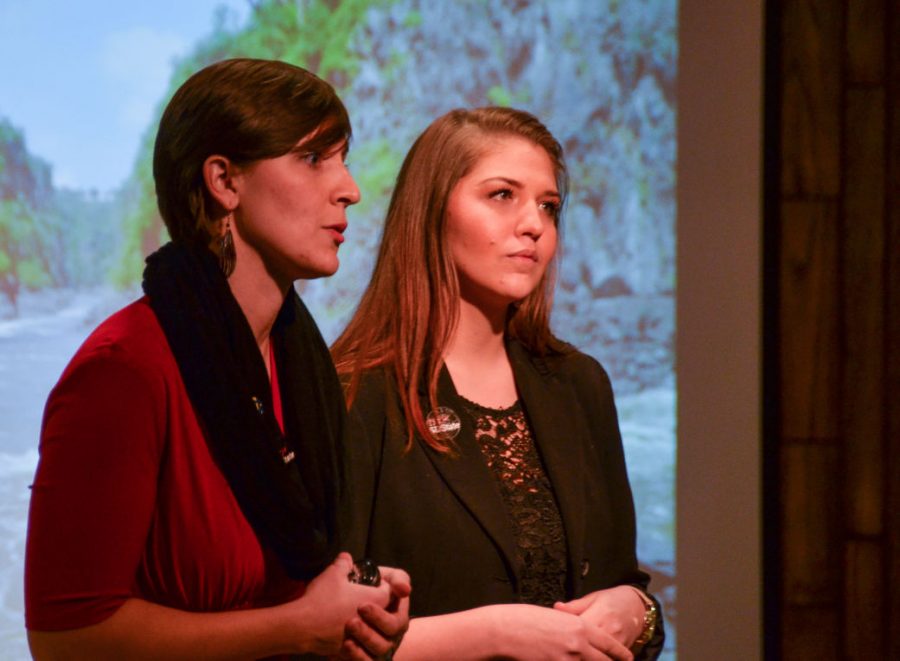 Andrea and Beth Mayrose speak about cultural expansion at the first TEDxSDState event last week. TEDxSDState hopes to have a talk every spring to pair with TEDxBrookings events in the fall.

Community members and students were invited to expand their minds at the first TEDxSDState event Feb. 20 in the basement of the South Dakota Art Museum.

“TED is an organization with the mission to spread ideas,” said Shanell Peterson, president of the TEDxSDState club.

This is accomplished through hosting events and posting videos of those events on the Internet to generate conversation. The theme of the first event was “expand.”

“We wanted to encapsulate what a college does,” Peterson said. “People’s minds and perceptions are expanding and we wanted to reflect that.”

The organization was started by Peterson and a friend Spring 2015, and ever since, they have been working to put on the six-speaker event, Peterson said. The goal is to have an event each spring to complement the TEDxBrookings events in the fall.

“We want an outlet for people’s ideas to be known. We want to make sure that SDSU students in particular have the opportunity to be a part of the TEDx community and we want to make sure we keep the energy going from TEDxBrookings,” Peterson said.

Peterson said she wants everyone to walk away knowing their idea is meaningful.

“I hope that the audience gets a better understanding of the world around them, I hope they leave our event with connections to help them further their career or their well-being,” Peterson said.

TEDxSDState is in the beginning stages, and planning the event has been a learning process, Peterson said.

“We’ve been trailblazing,” Peterson said. “Each step of this event has been completely new.”

The most important part, Peterson said, was to find the speakers.

“We want to make sure they are unique innovative ideas that open people’s minds,” Peterson said.

The event consisted of six speakers with an intermission in between. The six speakers were: Peter Dvoracek, Elizabeth Droke, B. Lynn Gordon, Andrea and Beth Mayrose, Josh Reineke and Travis Adler.

They each spoke about the positive benefits of wilderness expeditions, therapy dogs and suicide prevention, the importance of personality assessments, cultural perspectives and the ability to be open minded, nano particle cancer research and the Internet currency Bitcoin, respectively.

After Peter Dvoracek, a freshman biology and secondary education major, went on wilderness expeditions in Canada. He gained benefits from the experience, and he believes other people would gain something from similar expeditions.

“This would bring us together as one human species, and we would all benefit from that,” Dvoracek said.

Elizabeth Droke, an associate professor at SDSU, said interaction with therapy dogs can reduce blood pressure, improve moods and can lead to decreased symptoms of depression and anxiety.

“The first semester is very stressful, or can be stressful for that individual because they are transitioning to a new lifestyle,” Droke said.

These dogs, or cats, help those who lack adequate coping skills, Droke said.

Travis Adler, a senior business economics major, presented on Bitcoin. The online currency is one of the “biggest economic innovations” he’s seen because it’s fluid and decreases fraud.

“I just want to make people aware that the way we use money on the Internet is beginning to evolve and change, so that, when it happens, they’re not afraid of it and embrace it,” Adler said. “These things are going to change the way we do business.”

The goal of the TEDxSDState was to give students in particular the opportunity to be a part of the TEDx community, so the TedxSDState organization tried to find speakers tied to the university, Peterson said. They hope to incorporate new ideas into their events and continually improve.

“I don’t know where the future of TED lies,” Peterson said. “But it will be awesome, I promise.”