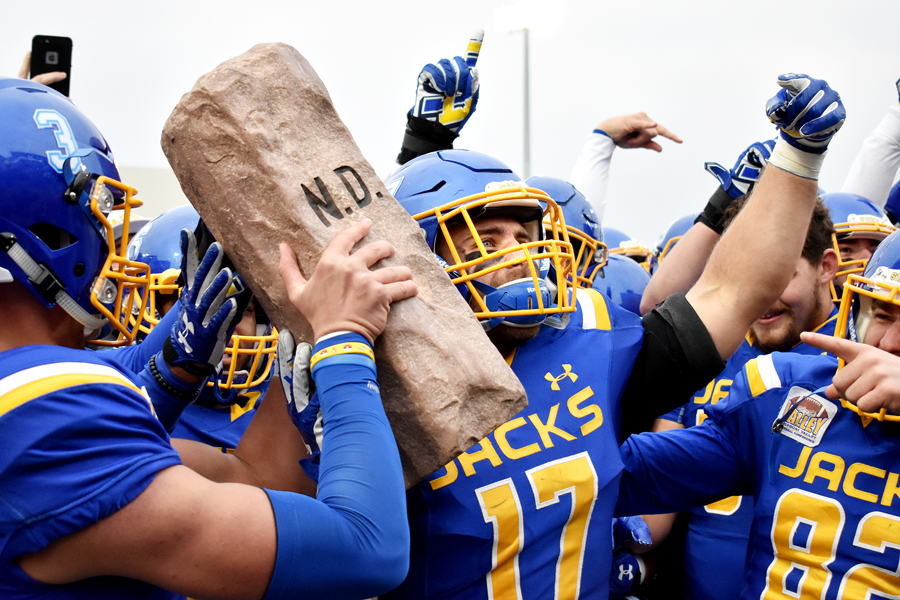 A key coming into the game for head coach John Stiegelemeier’s team, was winning the time of possession battle. Especially since, in their losses, the Jacks have struggled in that category. But the Jacks held the ball for 35 minutes today.

It was the highest point total the Jacks have recorded in the rivalry since the Marker trophy was introduced in 2004. It will just be the first time since 2008 that the Jacks have won back-to-back Marker games.

“Our offense has had three amazing games in a row,” Stiegelmeier said.

Indeed, they have. The Jacks never trailed in the football game. The high-octane Jack offense continued to get back into the groove and was clicking on all cylinders as they had 473 total yards on 69 plays.

“We weren’t moving the ball like we wanted to in the first half,” quarterback Taryn Christion said.

At the halftime break, the Jacks were up ten points but their running game was severely lacking. As a team, they only had 21 rushing yards on 13 carries.

Despite the slow start on the ground, the rushing attack found their groove and went for 123 yards in the second half.

Stiegelmeier and the Jacks went with their familiar multiple running back attack. Standout defense players included:

Brady Mengarelli led the Jacks on the ground with 13 carries for 64 yards.
Isaac Wallace had six carries for 34 yards.
Mikey Daniel had three carries for 24 yards, a touchdown and arguably the most impressive run of the game as he made multiple Bison miss tackles.
Taryn Christion also made plays happen with his feet as he had 11 carries for 25 yards and a touchdown.

Not only did Christion give the Jacks a boost on the ground, he made multiple plays in the air against a secondary that coming into the game was allowing 119 yards per game.

Christion has shown the accuracy and flashes of brilliance in the past three games. It was no different against the Bison, Christion completed 23 passes on 33 attempts for 329 yards and two touchdowns.

“Taryn did a great job of competing — you measure yourself against your competition,” Stiegelmeier said.

In front of five NFL scouts, senior tight end and NFL draft prospect, Dallas Goedert had his best game of the season. Goedert went for seven receptions on 116 yards and a touchdown. During the game, he became the leading tight end in career receiving yards in the Football Championship Subdivision. Goedert’s touchdown came on a circus-like one handed catch.

“I have practiced one-handed catches once or twice,” Goedert said of the catch. “It would have been kind of devastating to drop that.”

It wasn’t just the senior tight end that harassed the Bison defense. It was a group effort for the Jacks receiving corps.

The Jacks were effective in the red zone, converting on all five of their opportunities.

Defensively, the Jacks have struggled most of the time this season, but today was a much different story.

The Jacks forced five turnovers and only allowed 130 rushing yards.

Jordan Brown had the first interception for the Jacks.
Makiah Slade had one of the interceptions and returned it for 23 yards
Zy Mosley also got in on the action for his first career interception.

But it wasn’t just the interceptions that plagued the Bison offense. Two costly fumbles stalled out two drives for the Bison. Ultimately, the Jacks took advantage of the mistakes and scored 17 points off turnovers.

It continues to stay tough for the Jacks as they will host the Illinois State Redbirds at Dana J. Dykhouse Stadium next Saturday. North Dakota State will look to get back on track against the South Dakota Coyotes on Senior Day at the Fargodome.

“Look, we are going to lose a football game now and then,” Klieman said. “We have won 100 games in a decade, we are fine.”