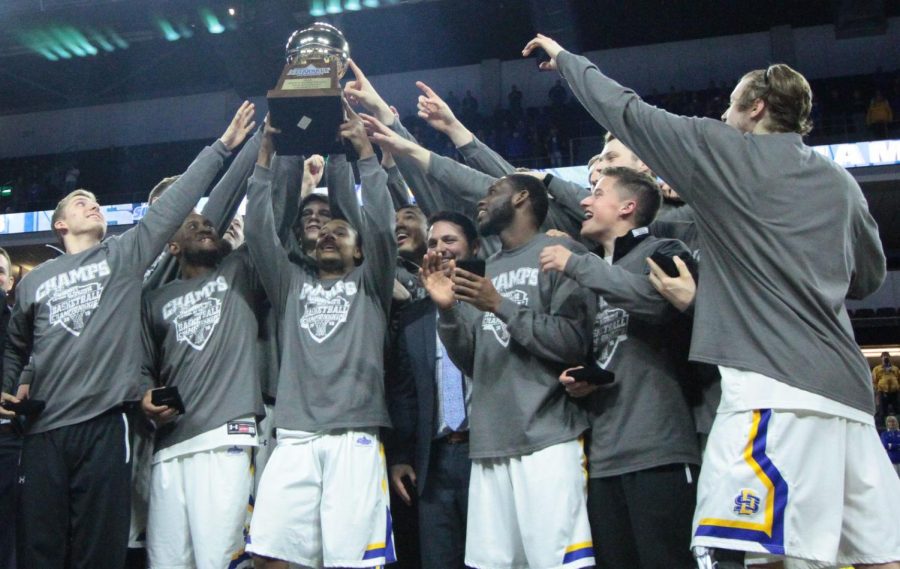 SIOUX FALLS — Last year’s one-point defeat in the Summit League Tournament championship game resonated in the minds of the South Dakota State men’s basketball team. With another meeting for the same prize one year later, the Jackrabbits were able to correct last year’s mistake.

In a back-and-forth contest in front of a record 10,188 fans, SDSU pulled away late and relied on its defense to come away with the win, which was punctuated by a steal from senior Jake Bittle as the clock wound down, securing a 67-59 victory for the Jackrabbits and the third NCAA Tournament berth in the past five years for the program.

“This is the hardest I’ve seen our kids play all year,” SDSU Head Coach Scott Nagy said. “I’m just really happy for our guys, especially for our seniors cause now they’ll get the NCAA Tournament experience.”

With gritty play from more gritty play from Bittle and another offensive surge from redshirt freshman Mike Daum, the play of two seniors who transferred into the SDSU basketball program made the biggest difference.

Keaton Moffitt, who transferred from the University of Sioux Falls, provided some surprising offense for the Jacks when they need it the most, contributing 11 points, including an unexpectedly confident three-pointer, and seven rebounds.

As a South Dakota native and someone who’s done the dirty work for the Jacks all season, this win was especially nice for Moffitt.

“I’m happier than I’ve ever been in my life,” Moffitt said. “It’s hard to put into words but that just about describes it.”

Meanwhile, Deondore Parks came to the Jacks through the junior college circuit, transferring from Iowa Lakes Community College. While George Marshall continued to struggle to find his shot (2-of-10 from the field), Parks lifted the team up with a second half barrage.

Parks went on a personal 4-0 run to lift the Jacks to a 50-42 lead with just under 12 minutes to play in the game. NDSU would get the deficit back down to four, but a few Daum free throws and a Parks three-pointer with just over four minutes left put the Jacks up a safe 11 points.

“This is the reason why I came here,” Parks said. “Coach Nagy drilled it in my head that we could get to the NCAA Tournament and we were surrounded me with great players and that’s why we’re here.”

Four free throws by Marshall and two by Reed Tellinghuisen put the game away for the Jacks, who were embraced by coaches, teammates and quite a few fans at midcourt to celebrate the win.

Even though his team has been in the title game in four of the past five years, Nagy knows how rare it is for a mid-major like SDSU to get the chance to play for an NCAA Tournament bid.

“If Mike isn’t the most efficient player in the country, he’s definitely up there,” Nagy said. “Towards the end of the year we’ve played through him because he makes everybody better.”

Ian Theisen, the sophomore forward who has lost some of his minutes due to Daum’s surge late in the year, came up big for the Jacks on the defensive end in the second half. Theisen blocked three shots at different times, leading to the Bison being unable to take the ball inside like they did in the first half.

“Ian was great tonight,” Nagy said. “The blocked shots are just icing on the cake because we don’t ask him to do that.”

The Jacks now advance to the NCAA Tournament, finding out their seed, opponent and the location of the game on Sunday. Parks isn’t all that jazzed about waiting five days.