Food revolution: on the breaking crust of 3-D printing 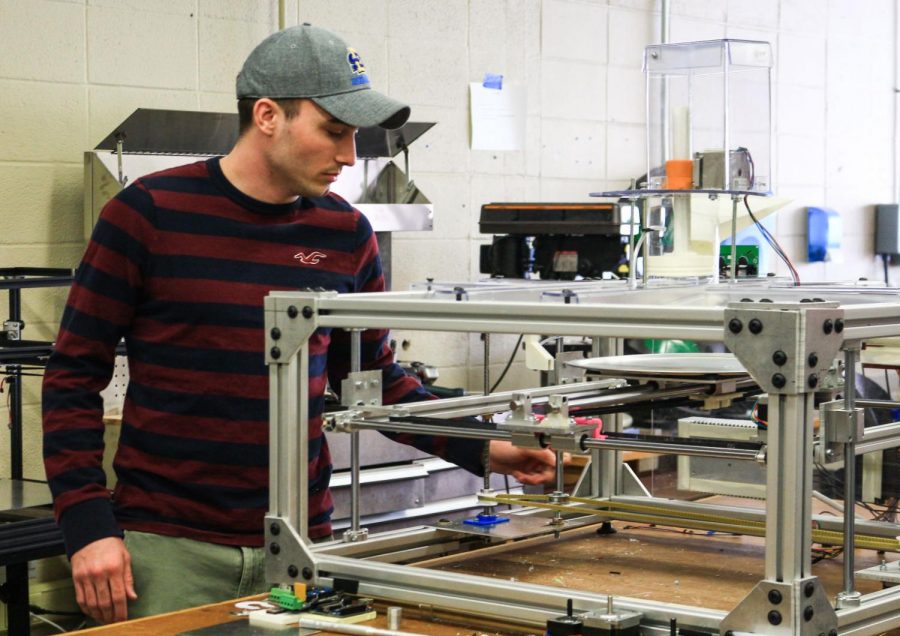 Eric Chapin demonstrates how the pizza printer works on Sunday, March 20. The machine will print out one part of the pizza at the time starting with the dough to each type of toppings.

Three SDSU engineering majors are currently working on their senior design project to make a machine capable of producing pizza by simply adding water to a powder mix–something that has never been attempted before and has the potential to completely change the way food is made.

This process eliminates the labor of cooking from the equation, saves time and opens up the door to 3-D printing different kinds of food in the future, which is a ceiling that has yet to be discovered.

Todd Letcher, the team’s adviser, came up with the idea himself from a need that stems from outer space.

“It was originally my idea. It started because I heard NASA was interested in printing food in the space station or on a future expedition to Mars,” Letcher said. “I would [even] like to have one at my house … I could sit here at work and tell the printer I want a pizza ready when I get home.”

The pizza printing process starts with a dry powder ingredient, similar to the function of a Keurig cup, and the user adds water to make what they desire, Sara Moore said, team member and senior mechanical engineering major.

This process differs from current 3-D food printers that require the user to mix up their own batch of base material.

“So far this is the only food printer in the world that starts from a dry powder based ingredient and does all the mixing in the chamber, and that’s really what makes this so unique and better and different,” Letcher said.

The team members believe that their chosen method of printing will prove to be better than current food printing methods.

“All the other printers out there are batter-based and not powder based … so I think they’re pretty constrained for what kinds of mixtures they can pre-load and the fact that it’s not as automated is what’s holding them back, too,” Moore said.

Figuring out the culinary aspect of the process has been one of the most difficult obstacles for the team.

“I would say the largest obstacle is trying to put food into data and trying to understand the flow of viscosity, [or its resistance to flow]” Moore said. “It’s difficult to define how much power is needed to push the material through.”

“It’s definitely been a challenge and almost hard for us,” said Eric Chapin, team member and senior mechanical engineering major. “[Working with culinary science] is hard because of how we look at it [from an engineering perspective].”

Culinary advice has been vital in this project’s success. Not only are taste and quality of the final product key, but also knowing how to work with food and the consequences of lacking food knowledge.

“Engineers working with food and not understanding how it works [is a large obstacle as well as] keeping foods safe. The general processing of food is different from the materials we work with,” Letcher said. “Last year’s pizza was not good. The recipe was designed by mechanical engineers, so there’s a reason we’re not food scientists.”

While the team works through these kinks and challenges in their project, their end goal is not a manufacture-ready product that could be rolled out to stores next holiday season. Rather, their goal is to make a functioning machine that will contribute to the ultimate manifestation of this powder-water mixing process one day.

“Our goal is to make the baseline of it work and the next step would be to make it able to be mass-produced at a manufacturing standpoint,” Chapin said.

Chapin, Moore and Jay Davison are the second team to take on this project — the group last year were the very first to attempt it, while the group this year is building on from their original design.

Some of the changes the group has improved on are obvious, such as the switch of base materials, while others have been more subtle but help the machine run better just as much.

“We redesigned a lot of the electrical layout to make it cleaner and more efficient. … Designing around the structure that they had already created as well as being able to manufacture [or having us make] the machine [has been a large obstacle],” Davison said, a team member and senior mechanical engineering major.

In the long-term future, the whole team as well as Letcher would like to see these food printers as a common household utility. For now, the machines feasibility will be tested “hopefully by mid-April,” Letcher said.

“For now we’re just documenting our process and one day when this becomes an actual product we can show our beginnings of where this started,” Letcher said. “People should definitely be excited about it and they should invest in it.”