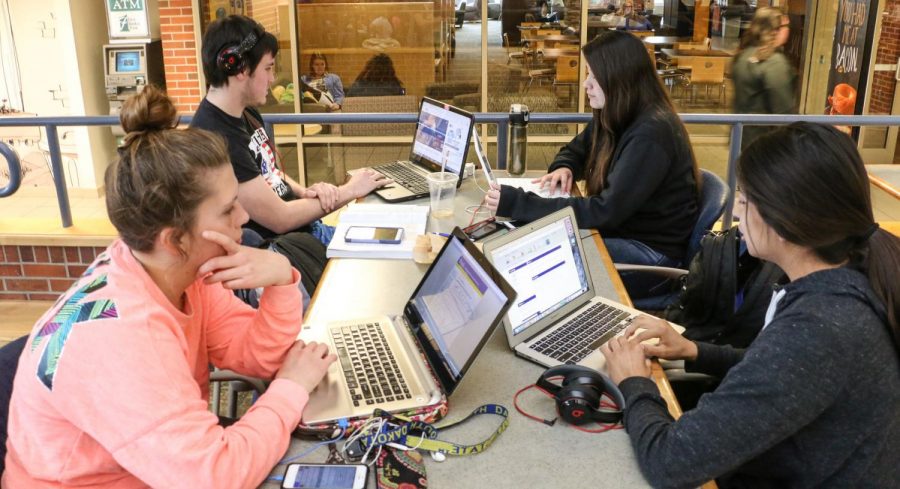 ‘We have a long ways to go’

Kevin Ingram feels “included” in the South Dakota State University community about half the time on campus. Judy Vega and Alix Alfke feel accepted “at times.”

Their perception of life for minority students at SDSU isn’t uncommon. As the university grows more diverse, some students of color don’t believe there is a strong enough emphasis on inclusion.

SDSU isn’t alone in struggling with this issue.

Topics about race, such as diversity and inclusion, have received national attention since the events in Ferguson, Missouri in 2014 and last fall with the protests at the University of Missouri.

“Inclusion, in my opinion, would be the university and the student body making a deliberate effort in including students in every activity and making students feel that they are just students and they’re not what people would normally see on the surface,” Ingram said.

He said he wants to be involved in many communities on campus, but he can’t provide his assistance if he doesn’t feel accepted.

“I feel that hinders me as a person and student here at SDSU,” Ingram said.

To have inclusion there needs to be education, according to Ingram.

SDSU President David Chicoine’s administration has been dedicated to this area through events, hires and policies, including SDSU’s strategic plan, Impact 2018. The effectiveness of these efforts depends on who is asked.

The next president, Barry Dunn, was announced Monday, April 25. During his interview with students, he said diversity and inclusion should be “a core value” of a land-grant university.

Dunn shows his passion for diversity and inclusion through his personal experience and by helping to strengthen tribal colleges in South Dakota.

When comparing South Dakota’s numbers to SDSU, the state contains more people of minorities than the university. In 2014, 85.7 percent of the state was white, 1.9 percent African American, 8.9 percent American Indian and Alaska Native, 1.3 percent Asian, 0.1 percent Native Hawaiian or Pacific Islander, 2.2 percent two or more races and 3.6 percent Hispanic or Latino, according to the Census Bureau.

There are varying definitions of diversity and inclusion, but Kas Williams, the adviser for African American programs believes inclusion is when everyone feels welcome.

“It should be almost tangible when you walk on a campus, institution, or wherever you should automatically feel included,” Williams said. “When you know you’re welcome without even having to ask.”

Williams thinks the diversity at SDSU is improving. To be diverse, according to Williams, you have to “recruit, hire and bring these folks [students, faculty and staff] in.” Inclusion is a little bit more difficult.

“It’s just these subtle things that we can do on this campus to make people who are different than us feel included,” Williams said.

Office locations can be a signal of how inclusive a campus is, Williams said.

She thinks the Multicultural Center should not be in the basement of The Union. The American Indian Cultural and Education Center is on the far perimeter of campus. The Gay Straight Alliance only recently got an office, but other student groups are located on the Main Street of The Union.

“Those kinds of things should not be happening,” Williams said.

C.D. Douglas, executive director for Multicultural Center, has been on campus for 18 years and he has seen improvements.

“But we have a long ways to go,” Douglas said.

Douglas said he has never witnessed or experienced racism issues himself on campus, but the students he serves have.

“Racism is taught. It is a learned behavior,” Douglas said.

He encourages students to embrace diversity and inclusion because once they graduate they will interact with a variety of people and races.

“The world is going to look a lot different,” Douglas said alluding to the changing U.S. demographics.

In the Multicultural Center, students of varying races, gender and backgrounds gather. Two of these students are Alix Alfke, a junior nursing major, and Judy Vega, a junior Spanish major.

For them, inclusion means being a part of a community and having all types of races. They feel included and welcomed in the Multicultural Center.

“People should just be aware and have knowledge of everything, not just their own,” Vega said.

Alfke and Vega are executive members of the Latin American Student Association, which only has 10 members. They struggle trying to get new members for their organization.

Vega wants students to attend LASA meetings, but the majority of students who come to the meetings attend because of a class requirement for a cultural event.

“I find it difficult to bring people together for their own personal interest,” she said.

Alfke said students will take pictures of their posters instead of attending their meetings or asking them questions about LASA so the student can get credit for a class.

Vega and Alfke agree there is not much in Brookings for the Latino community. There is one Mexican store, Tapatio, and one Mexican restaurant, Guadalajara.

“The only thing we would have is the Multicultural Center,” Alfke said.

Across campus, organizations have implemented programs to target diversity and inclusion. Some include the CommUNITY Dialogues, the Difference is Dialogue, a diversity radio show and discussions in different classes.

Ingram and Williams share the same concern about a new administration.

“I think they have to make it their mission, and I think that would be another thing,” Ingram said. “If they have a background in diversity and inclusion, then they’re better equipped to help the student body here, but if not I don’t see it growing, to be honest.”

From a staff perspective, Williams said she is nervous of what the next administration will or won’t do for diversity and inclusion.

“Now that the leadership is leaving, what is the new leadership going to focus on?” Williams said. “It needs to be something that we ask for. We need to help them create their agenda because they’re going to come with their own agenda but we need to let them know what we as an institution, what we as Jackrabbits, expect when it comes to issues of diversity.”

Diversity and inclusion may seem foreign to students who come from small towns across the Midwest. Caleb Finck, the former Students’ Association president, grew up in Trent, South Dakota, with a population of 233.

“You had to go outside your comfort zone,” Finck said regarding diversity. “That cultural change is hard to grasp.”

Other students who are minorities that come from larger towns have a different past and experiences on campus than students from small towns.

She is not afraid to talk about issues of diversity and inclusion.

“This is how I feel,” Ghebrekidan said. “I’m Semehar—this is what you’re going to get.”

Throughout her time at SDSU, she said, she has faced death threats because of her efforts to improve the experience of minorities on campus, but issues of diversity and inclusions are not clean-cut issues.

“Not every white person is racist and not every [minority] person is active,” Ghebrekidan said.

Douglas and Williams both mentioned the importance of everyone having their voice heard.

“It would be nice to get everyone to come to the table,” Douglas said.

Williams, on the other hand, noted what happens when someone isn’t heard.

“If you’re not at the table then you’re on the menu,” Williams said.

Williams looks to the future of diversity and inclusion and asks what the university can do to be ready for changing demographics.

“What is the next thing that we need to do to be ahead of this curve regarding diversity?” Williams said. “We shouldn’t have to be reactionary toward these things. We should be the leaders in these things.”