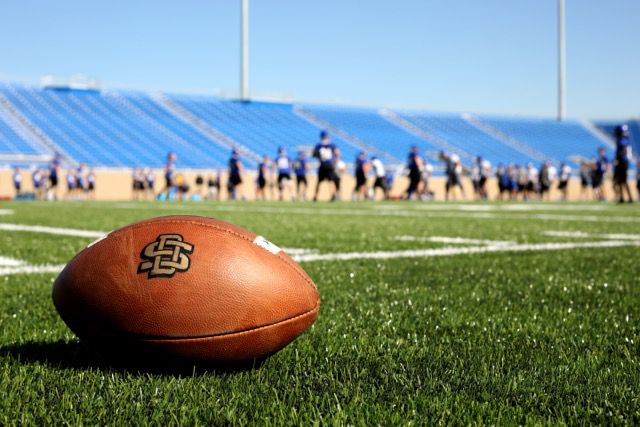 Instead of grass, the new Dana J. Dykhouse stadium's turf was made using soybean oil. the turf will not be affected by rain and does not need to be constantly painted.

the Dana J. Dykhouse stadium, and they may not realize that soy was a key product in the construction.

The turf in the stadium was installed this summer. The portion of the turf that the artificial blades of grass attach to are made using soybean oil.

Artificial blades of grass are attached to the backing of the turf, which is similar to carpet backing. The backing of turf was made by using soybean oil.

Soy turf was also installed in the Sanford-Jackrabbit Athletic Complex where the football team typically practices.

This type of turf uses a soy-based polyurethane instead of petrol-based polyol that is typically used in artificial turf. The turf in the stadium was produced by AstroTurf LLC.

Jeff Holm, senior associate athletic director for facilities and operations, said the artificial turf made using bio-based polyol was a natural choice for a land grant university such as South Dakota State University.

The Dana J. Dykhouse Stadium is one of the few stadiums in the country to have a soy-based turf. Kansas State University also has a turf made using soybean oil.

The turf may be different, but it will not cause any issues for the players, Holm said.

Players and spectators may not even notice the difference in the turf.

“There is no significant difference,” Holm said. “It’s just a different way to manufacture it.”

Turf was chosen for the stadium instead of grass because weather would not affect turf. Holm also said the athletic department will not have to paint the turf. When there was grass, they had to repaint the surface frequently.

“The artificial turf is huge for us,” Holm said. “and for our team to have a consistent place to practice.”

The football stadium is nearing completion, and there will be an open house Aug. 27 from 2 p.m. to 4 p.m.

Minor work will continue happening during the open house, but Holm said the stadium is “on time” and “on schedule.”

”By Sept. 8 for the Luke Bryan concert and the first football game,” he said, “we’ll be all set.”