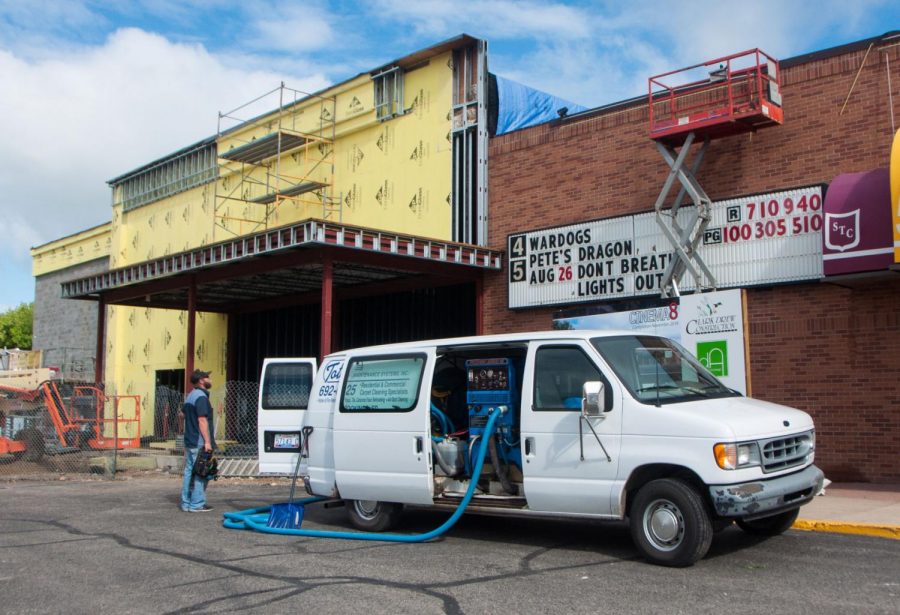 Workers repair the damage caused to the roof of Cinema 5 due to a fire on Friday night on Saturday, Aug.20, 2016 in Brookings, S.D.

A fire on the Cinema 5 rooftop made movie-goers evacuate the building around 10:30 p.m. Friday, Aug. 19.

No one was injured. Damage to the building will temporarily force Cinema 5 to become Cinema 4 as a theater will be closed for repairs.

Although the fire only damaged the roof, smoke from the fire and water from firefighters damaged theater five.

Repairs should be completed within the next month, said Dick Peterson, Brookings Cinema 5 owner. The screen, sound and wall decorations for theater five, in the southwest corner of the building, will be replaced.

Construction work on the theater expansion is not impacted, he said.

The fire was caused by by a lightning strike to the building during the storm the night before, said Darrell Hartmann, the Brookings fire chief.

Workers reported a leak in the movie theater roof earlier Friday and roof workers repaired the piece of damaged roof from the lightning. The lightning damaged the power source for neon lighting on the roof, but wasn’t seen or fixed and later led to the fire, Hartmann said.

To compensate for one less available theater, Cinema 5 will only be showing “Pete’s Dragon” during the day and “Sausage Party” during evening hours.