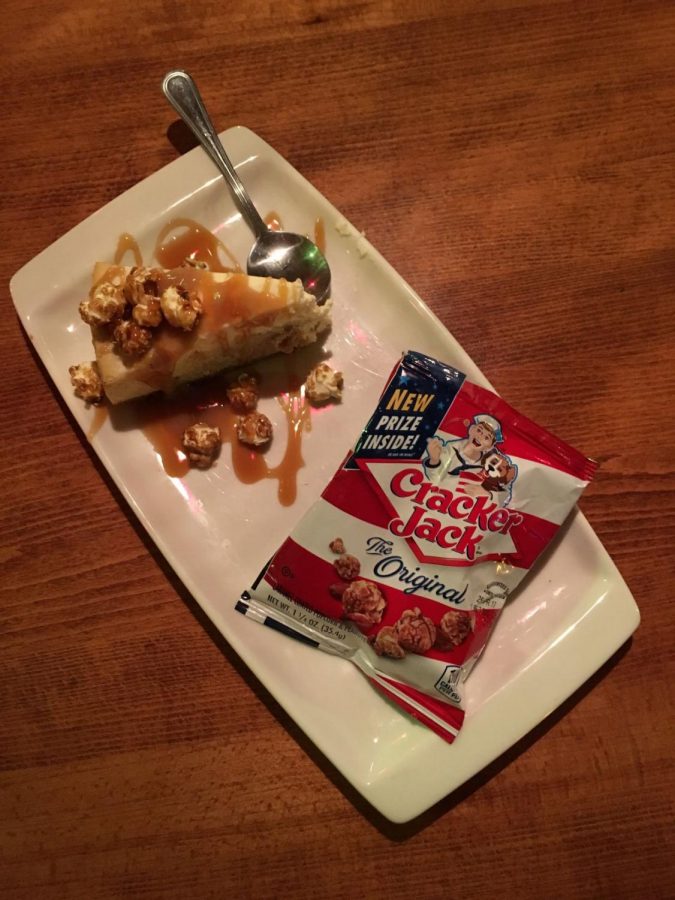 Editor’s note: Continuing the “Five Weirdest” series, this week, I ventured around Brookings with a few buddies to see what weird desserts the city has to offer. Unlike last week, I did not find all of these desserts in the same place, and I even found some weird ones at chain restaurants.

Abbey Kephart, a barista at Choco Latte, said Rolfe Behrend, the husband of the owner, makes the fudge, and during the peak holiday season they sell around 100 pounds of fudge a week.

What Kephart had to say: “My favorite is the maple nut because it tastes like pancakes. It’s the most comforting.”

My take: The flavor I tried was birthday cake, which is one of their seasonal flavors. Imagine eating the batter of funfetti cake mix — that is exactly what it tastes like. It’s pretty decent, but I’ve never been a huge cake fan.

This dessert item can be found at Buffalo Wild Wings. It contains crispy tortillas topped with ice cream, fried cheesecake bites, cinnamon and sugar and is drizzled with caramel and chocolate sauce.

What Buffalo Wild Wings had to say: They did not respond back prior to deadline, so unfortunately, we do not get to hear the glorious words of BWW.

My take: So, so, so much sugar. But it was surprisingly good. I had heard the fried cheesecake bites weren’t that good, and I’m still not entirely sure how I feel about warm cheesecake, but they weren’t as bad as what I was led to believe.

Pheasant Restaurant and Lounge is relatively well-known locally for their strange ice creams. They currently feature a cantaloupe ginger sorbet crafted by Trevor Clements. Shawna Madison, a waitress at the Pheasant, said they serve the flavor of ice cream until they run out. Over the course of the year she has worked there, she has rarely seen the same ice cream twice.

Madison said to look out for the next flavor of ice cream, which she expects will be candied bacon. Though the cantaloupe ginger sorbet isn’t her favorite, she said there are many other good flavors Clements comes up with.

What Madison had to say: “He [Clements] has no idea what he’s going to do. He just goes on a whim and does whatever, even sometimes while he’s making it he doesn’t know what he’ll put in it.”

My take: I was a little skeptical of the combination of ginger and cantaloupe, even though I am a big ginger fan. It was definitely an interesting flavor — the sorbet wasn’t overwhelmingly ginger-ey at first, but as I continued to eat it the flavor of ginger increased. If you’ve ever eaten fresh ginger, you know the zingy, tingly, almost burning sensation you get in your mouth, and that is what you get with this sorbet.

On a random side note, ginger supposedly has health benefits (or so I hear). A few bites of this were good and refreshing, but by the end, I was definitely over the ginger.

This strange dessert is a new feature on the Applebee’s menu. It features banana cheesecake topped with bananas foster sauce and Cracker Jack popcorn and peanuts.

What the Applebee’s general manager had to say: “It throws you for a loop and has a banana hint, so that’s a little different. But it’s good.”

My take: This was just weird, which I guess is the point of finding the weirdest desserts in Brookings. But again, this was just weird. I’m assuming most people have eaten banana bread, and it was like eating a creamy, cheesecake form of that. Then it was combined with the Cracker Jack popcorn on top, and it was sort of sweet and salty. I’ve never been a huge fan of sweet and salty food items, and although I have liked a few, this was not one of the few. However, don’t let my opinion stop you from trying it because it was definitely an experience.

Another food item offered on Applebee’s menu. This is basically what it sounds like. There are some strangely thin churros served with chocolate sauce and melty marshmallows.

What Applebee’s general manager had to say: “It’s much better than normal S’mores. Though, I personally like it without the chocolate sauce.”

My take: I think I prefer my churros and my S’mores separate. Compared to the Cracker Jack Banana Cheesecake, I would take this any day, but it was still not my favorite weird dessert of the bunch.

Overall, I think this week was somewhat of a fail just because I couldn’t find a dessert that truly satisfied my palate. If I had to choose, the fudge or dessert nachos would have to be my favorite. Check back in next week for the weirdest (and best) margaritas in Brookings.