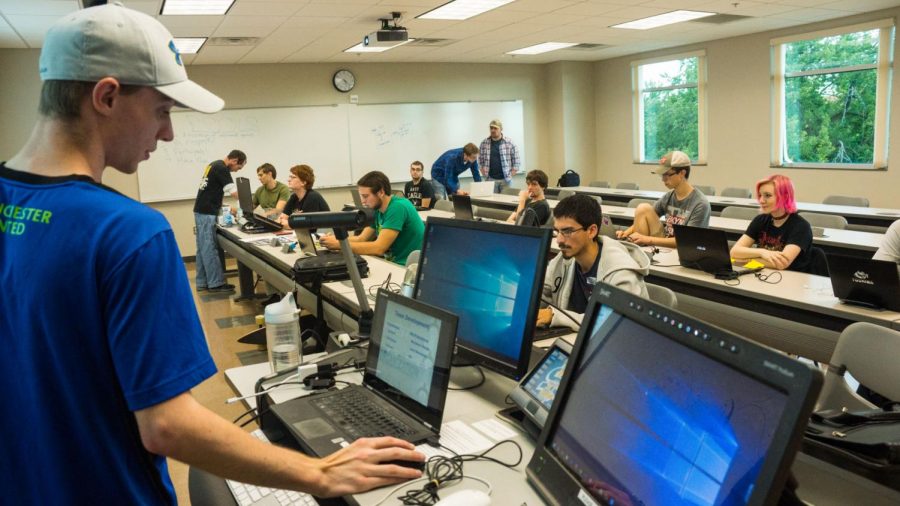 Members of the club desire to create video games, and to increase their knowledge of computer programming. GCO meets in Daktronics Hall 370 every Friday at 5 p.m.

One of the organization’s main goals is to create video games through teamwork and relationship building.

According to Tyler Russ, senior electrical engineering major and GCO president, the mission of the club is “to design and create video games to demonstrate that collaboration can bring a vision to reality.”

Russ began GCO four years ago during his freshman year as a hobby for programming video games.

He met current senior computer science major Alex Staebell while they both lived in the Honors Residence Hall their freshman year, and discovered that they shared the common interest of video game development. Together they cofounded the GCO, and it has been running ever since.

However, not all members of the club started with a knowledge or enthusiasm for computer programming.

One of the goals in the mission statement of GCO is to design and create video games, and senior mechanical engineering major Bradley Schroeder reflected on his prior dislike and lack of skill for computer programming.

Since joining GCO last year, Schroeder has gained an interest in coding. The club gave him the opportunity to program, and it eventually became fun for him.

“Anyone who wants to make a game can jump in and we’ll give you the tool work and the necessary knowledge and you can get going,” Schroeder said.

GCO hosts an array of events throughout the year, including Staebell’s favorite event, the Summer Game Jam.

The goal of the event is to create a video game in 48 hours. Staebell said it facilitates “a lot of camaraderie building, lots of relationship building.”

The organization members are careful in creating an environment where everyone is welcome. Member Zachary Schroeder describes GCO as one of his favorite clubs.

“Everybody here is extremely nice and friendly and if you have questions with homework or anything they will be more than happy to help you,” he said.

Students interested in getting involved are welcome to attend the meetings, and outside of club meetings, Staebell said, members are encouraged to develop their skills.

“The most rewarding experience for me being involved in GCO would be the people I’ve met throughout the years,” Staebell said. “I think what I really got out of it was me coming out of my shell a little bit … that helped me be a little more confident as a developer and just take pride in what I do in my free time.”