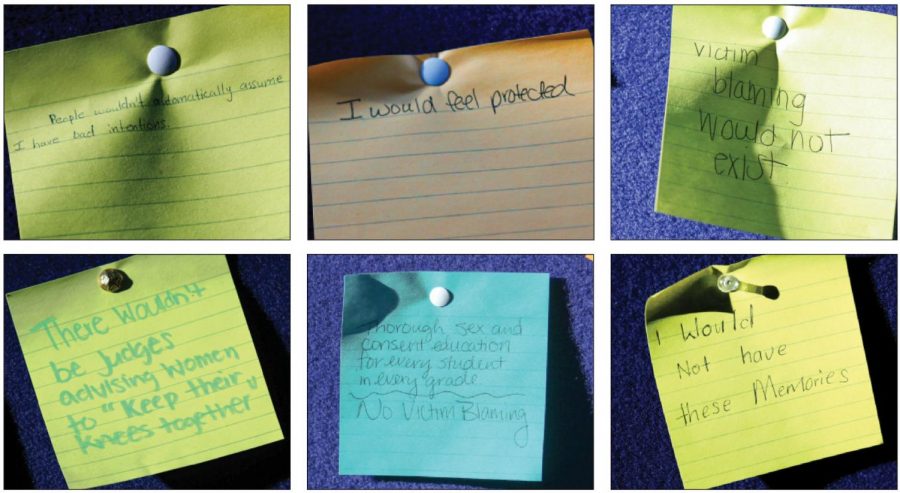 Female Equality Movement put a bullietin board up on Main Street in The Union last week and asked students to “imagine a world without sexual violence” and what they think would be different. FEM is also involved in Sexual Assault Awareness Week, which will take place Oct. 3 to Oct. 6.

Organizations across campus are making it a mission to raise awareness about sexual assault.

Sigma Phi Epsilon Fraternity, Feminist Equality Movement and South Dakota State Human Resources will partner together for Sexual Assault Awareness Week Oct. 3 through Oct. 6. The organizations aim to raise awareness about the issue on campus and educate students about the resources available to them.

Jacob Gubbrud, vice president of programming for SigEp, said as a group of male leaders on campus, they want to raise awareness about how they can be the difference in stopping campus sexual assault.

“Our national fraternity started the Live Your Oath campaign to show that we can take an oath to start change on this,” Gubbrud said.

The Live Your Oath campaign is a national partnership between SigEp and the Alpha Delta Pi Sorority that began in 2015 to encourage members of the two organizations to understand consent and identify sexual assault to prevent it.

Gubbrud said the fraternity wants to break the stereotype that Greek Life is more responsible for sexual assaults than other on-campus organizations.

The fraternity has partnered with SDSU Human Resources and the Feminist Equality Movement (FEM) student organization for advice as well as program coordination.

Their goal is to raise $500 in donations for the Brookings Domestic Abuse Shelter, which has housed victims of sexual assault. The shelter provides a safe space, meals and counseling services for victims of domestic abuse.

Larson Manufacturing in Brookings has promised to match the fraternity’s collections up to the goal amount of $500.

The week begins Monday, Oct. 3 when the fraternity brothers will table in The Union from 11 a.m. to 2 p.m. During this time, they will distribute pamphlets with information about sexual assault. They will also take donations for the Domestic Abuse Shelter in exchange for sunglasses, buttons and teal-colored ribbons.

On Tuesday, Oct. 4 the fraternity brothers ask students on campus to wear teal, the official color for sexual assault awareness. For this day, the brothers will be spotted on-campus wearing teal-colored t-shirts to raise awareness as well.

For 24 hours, the fraternity will also be seesawing on the west side of the Student Union outside of Einstein Bros. Bagels. This will begin Wednesday, Oct. 5 at 11 a.m. and continue to Thursday at 11 a.m. The fraternity plans on seesawing for 24 hours to engage students into asking questions and to demonstrate that sexual assault can happen at any time.

On Thursday night, Oct. 6, FEM is showing the film “The Hunting Ground,” a CNN documentary about campus sexual assault. The fraternity will also be promoting the film throughout the week.

In raising awareness about this topic, the fraternity hopes to educate students about the common circumstances that involve campus sexual assault.

“One of the misconceptions is that a lot of assaults occur from strangers,” Johnson said. “In reality, they most occur from people that are known to the victim and [that the victim] could recognize. The most common time for sexual assault on college campuses is within the first three months of the school year.”

Johnson said this trend is because assailants often target students who are still adjusting to the campus environment.

SDSU’s campus community saw six sexual assaults last year with students being alerted of these through the school’s timely warning email alert program. In each case, the victim was female and in five of the assaults, it was confirmed that she knew the suspect.

“This is something that needs more attention, not only across college campuses but for society as a whole,” said FEM member Annelieke Sinnema. “The case with Brock Turner, the Stanford rapist, just shows the need for more awareness. If the two bicyclists didn’t know about bystander intervention, it could have been very different.”

This year, there has been four reported sexual assaults so far.

“If someone is sexually assaulted, I would recommend that they please tell somebody. Ideally, we would like them to talk to our office so we can help prevent a recurrence and help them work through it,” Johnson said. “But if we don’t know, we can’t help anyone and the offender could hurt another person. On average, a person who sexually assaults someone will do it eight more times before getting caught or stopped.”