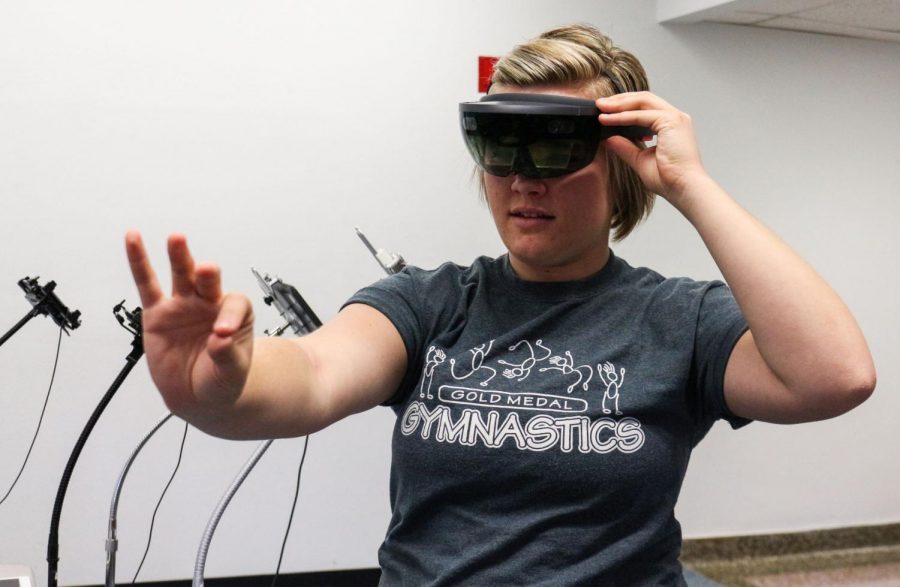 This is just the first appearance of a new technology trend on campus, said Shouhong Zhang, manager of Industrial Design Services (IDS) with SDSU Information Technology.

IDS offers support to faculty and staff on how to use the newest software programs and technology to teach students in classes. IDS also tests new electronic devices on behalf of technology companies to improve usability.

“I think there is a huge potential for teaching with these devices,” Zhang said. “This could be used to teach students in fields like the health sciences, agriculture and design.”

In June, Microsoft offered two prototype headsets to IDS, called HoloLens, which use a combination of virtual and augmented technology to create mixed reality.

The HoloLens is currently being tested by IDS and by two construction management classes as well as four architecture classes.

The students in these classes are using these headsets to view 3-D models of various building structures and architectural designs to get a better, more immersive understanding of the subject. They also provide feedback about the HoloLens to IDS and Microsoft who use their responses to improve the technology for general consumers.

Senior electrical engineering major Tyler Russ was able to work with another digital reality headset, the HTC Vive, while he interned at Interstate Electrical Contractors Inc. during the summer.

“Right now, this [virtual reality] is mostly being used in entertainment like video games. Sony just came out with PlayStation VR [Virtual Reality] and that might be able to create more hype for virtual reality,” Russ said. “I’d definitely advocate for using it on campus if we can get the cost of it down and we have a good reason to use it in classes.”

AR is already affecting consumers’ lives with commercial use of the technology in apps like Pokémon Go and Snapchat.

The HoloLens being tested by students and IDS allows users to interact with the real world and the digital world while still creating an immersive experience for the user. For a student using the device to study a new subject, that subject is put into three-dimensional terms in front of the viewer’s eyes.

When a user puts the headset on, glass screens cover their eyes, similar to regular eyeglasses. The device projects images into this glass, which allows users to see the world around them and also the 3-D displays that fit into the space around them.

In addition to visuals, sound is also projected with the purpose of creating a more immersive experience. The HoloLens is able to track eye and hand movement and record speech to be interpreted as commands from the user.

Some of the current features of HoloLens include creating and viewing 3D models, internet use, videogame use, Skype and other forms of communication.

This technology has been around for decades and was first used by the U.S. military to train pilots in flight simulators, according to computer-science professor Sung Shin. Digital reality could potentially be used by everyday consumers within the next couple of years.

Earlier this month, Oct. 3 to Oct. 6, IDS hosted the 11th annual Technology and Innovation Expo in its faculty lab in Pugsley.

They introduced the latest technology to university instructors and the general public. The expo included many speakers who presented new AR apps, virtual mediums for teaching and the HoloLens and other digital reality headsets like Samsung’s Oculus Rift.

Zhang presented technologies at the expo and said he hopes to one day be able to provide more digital reality headsets like the HoloLens to students on SDSU’s campus.

“The HoloLens is able to show the users things that books and video cannot,” Zhang said. “Instead of looking down at a book for a picture of something or watching a video, we are able to look at it all around us and for things like the human body, that would be a big use for students.”