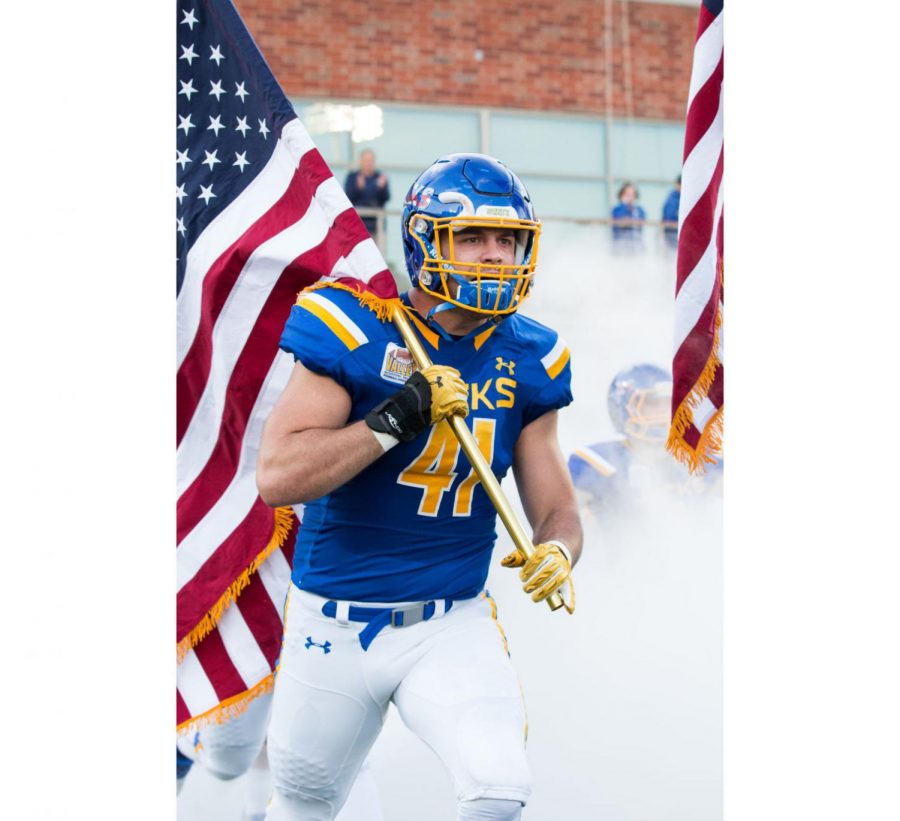 At the annual Military Appreciation game on Oct. 1, 75 American flags, each military branch’s flag and the POW/MIA flag were flown along the top of the east side of the Dana J. Dykhouse stadium. Kane Louscher was one of several players to carry American flags onto the field.

The South Dakota State Jackrabbits football team will face off against the Southern Illinois Salukis in Carbondale, Illinois, for the first meeting between the two opponents since 2013.

On paper this matchup proves to be a high-scoring affair as both teams have potent offenses. SDSU, who is ranked No. 12 in the Foofball Championship Subdivision, leads the Missouri Football Valley Conference in scoring per game, averaging 45 points. Southern Illinois is fourth in scoring in the MVFC, with an average of 32.8. Both teams have defenses that have seen some troubles this year as both are giving up 29.8 points per game.

The Jacks (2-2,1-0) are coming off a 52-14 win over the Western Illinois Fighting Leathernecks. The victory was especially due to the help of the defense, who allowed only 159 passing yards and a net of 183 rushing yards. Entering that game, the defense was a major concern for the Jacks, but they answered critics with their stellar performance.

“We were just able to do the job, stop the run and able to settle down defensively,” Head Coach John Stiegelmeier said.

The Salukis (2-2, 0-1) are coming off a 42-21 road loss to the University of Northern Iowa Panthers. In this game they turned the ball over three times and gave up 398 yards of offense.

The SDSU defense is led by redshirt freshman linebacker Christian Rozeboom, who returned an interception for a touchdown last time out, and senior linebacker Jesse Bobbit.

Dallas Goedert, the junior tight end for the Jacks, is coming off a career best performance, catching eight passes for 204 yards and four touchdowns. He won MVFC Player of the Week with his performance.

“The tight end (Goedert), in my opinion will be a draft pick. He’s a really good player,” SIU Head Coach Nick Hill said.

Quarterback Taryn Christion is coming off a great performance, throwing five touchdowns and 361 yards against Western Illinois. Christion now has 15 passing touchdowns on the season, which is third-most in the FCS. He leads the FCS in quarterback rating with 189.2.

“It all starts with the o-line, and I don’t think I got tackled once,” Christion said.

The SDSU offense will be well off if they can manage to buy Christion as much time as they did against Western Illinois.

“The fat guys on the line impressed me the most, they were spectacular in our win last weekend,” Stiegelmeier said.

The SIU defense is led by senior Deondre Barnett who has four forced fumbles on the season. Barnett is also seventh in the FCS with four sacks this season.

Senior Josh Straughan, the Southern Illinois starting quarterback, leads the conference in passing yards per game. Straughan is 351 yards away from 7,000 passing yards throughout his college career. He is the ninth-ranked quarterback in career passing yards in the FCS.

The Salukis are ninth in the FCS in passing offense so far this year. They also have a good running back, sophomore Daquan Isom, who coach Stiegelmeier calls “the best player on the team.” Isom is the seventh-ranked rusher in the Missouri Valley Football Conference. The Salukis also use Isom as a part of their passing game, and he can be used as a threat in many different ways.

“We just have to be able to defend their passing and attack their base defense,” Stiegelmeier said on the keys to defeating the Salukis.