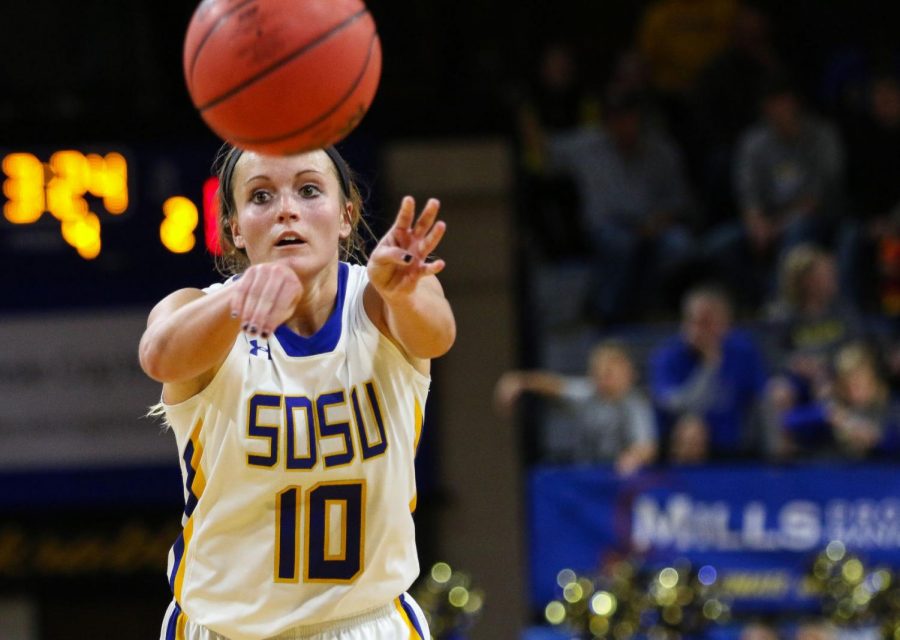 The South Dakota State women’s basketball team advanced to the Summit League semifinals with a 65-50 win over the Oral Roberts Golden Eagles.

The South Dakota State women’s basketball team opened their season with wins over the Creighton Bluejays and Southern Illinois University Edwardsville Cougars at Frost Arena this past weekend.

On Friday night, the Jacks defeated the Bluejays 63-56 in their season opener.

“It was a good win against a very good team in Creighton,” said SDSU Head Coach Aaron Johnston. “Creighton is excellent in all phases, they are deep, they’re good offensively and defensively. If you look at the stat sheet we were pretty much identical except we made a few more free throws.”

The Jackrabbits led at halftime 30-24 and outscored Creighton 18-8 in the third quarter. Creighton would storm back in the fourth quarter and cut the lead to 56-51 with 2:31 remaining, but the Jacks would make five out of their last six free throws to clinch the victory.

“It was hard to score tonight, the end of the third quarter really killed us,” Said Creighton Head Coach Jim Flanery. “To fall down that much, when we hung in for most of the game really killed us. We did some decent things to keep ourselves in the game in terms of defense and on the glass, but they hit some big baskets to keep the game away from us.”

SDSU then took on SIU Edwardsville on Sunday. The Jacks got out to a hot start leading 18-4 with over half of the opening quarter left to play and never looked back on the way to an 82-49 win.

Macy Miller scored her 1,000th career point in the game and became the 33rd player in SDSU women’s basketball history to score 1,000 or more points. Miller ended the game with 18 points to lead the Jacks.

“It’s a nice accomplishment. I can’t thank my teammates enough for finding me when I’m open and passing me the ball,” Miller said. “It means a lot to me, but it’s not something I think about. While a lot of people in my family have scored 1,000 points, I don’t put that pressure on myself.”

She became the seventh member in her family to score more than 1,000 career points in their collegiate careers.

“It’s an even bigger accomplishment to get it during a win,” Miller said. “The way we played today was a great feeling.”

Senior guard Kerri Young and sophomore guard Madison Guebert contributed 14 points each to the win. Young is only 44 points shy of becoming the 34th member of SDSU’s 1,000-point club.

Miller, Guebert and Young had 36 of the Jacks’ 44 first-half points. When the Cougars scored on their first possession of the first half to make the score 44-25; that marked the only time the Cougars came within 20 points.

“Not just one person sticks out on our team,” Miller said. “It can be Ellie here, Kerri there and Maddie, too.”

Up next the Jacks begin a four-game road trip when they play in the Hawkeye Challenge Saturday and Sunday in Iowa City, Iowa. The Jackrabbits play Montana in the opener at 10 a.m Saturday and then play either the University of Massachusetts or Iowa University at either 11:30 a.m. or 2 p.m. Sunday.