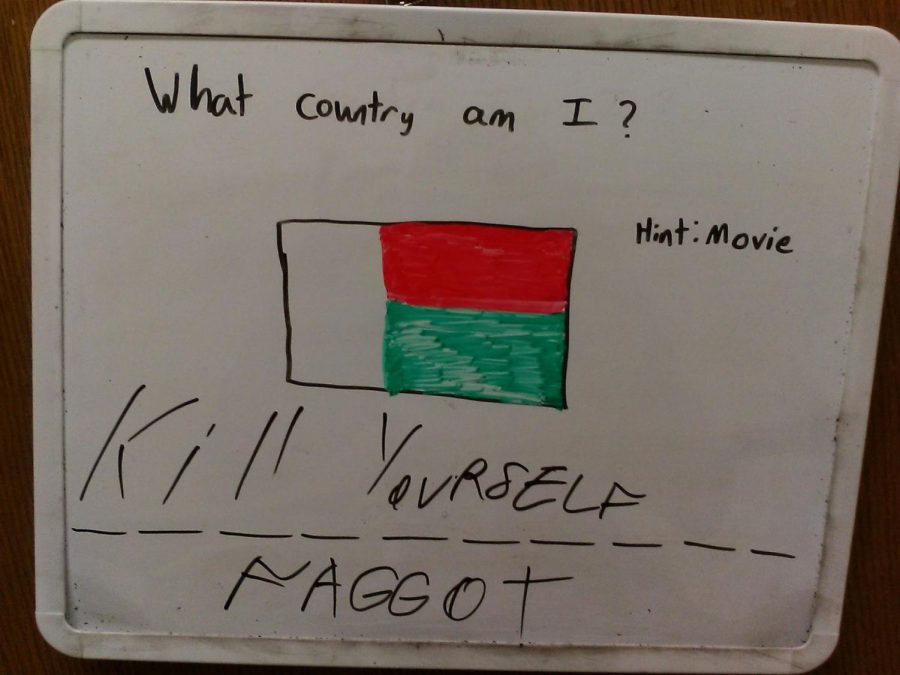 Tanner Johnson, Hansen Hall resident, received this message Nov. 9  on his message board following the presidential election. Johnson, who identifies as bisexual, had hung up a gay pride flag on his door.

Each time a message appeared on his dry erase board, Johnson, junior history education major, would erase it and prepare the board for trivia questions he regularly posed to his neighbors in Hansen Hall.

The latest message he found written on Nov. 17 was a Nazi swastika and a new answer to a trivia question which suggested Johnson contracted AIDS from an African country.

Johnson has since taken the board down, but the pride flag remains.

Associate Vice President for Student Affairs Doug Wermedal said there will likely be a Title IX and law enforcement investigation of the events.

“When students are impacted by something like this, we have the responsibility to respond every time,” Wermedal said. “We remain constantly vigilant in maintaining the safety of our students, but our ability to educate tolerance is something we pursue vigorously.”

Johnson said he taped the flag to his door, not as a response to the result of the presidential election, but as an expression of his bisexuality and a way to make his door “look pretty.”

“This doesn’t affect the way that I look at myself, mainly because of the amount of support that I’ve gotten from people,” Johnson said. “It worries me that people think this way, but it doesn’t make me feel unsafe. I’ll be putting the board back up eventually, even with the possible risk of this happening again.”

Johnson posted photos of the messages on Facebook to inform family and friends about what had been written. The posts were shared by the SDSU Gender and Sexualities Alliance.

“I think that anonymity tends to make people bolder,” Johnson said. “They can just leave their opinions and get out of there without there being any accountability for what they say.”