‘This happens every year:’ blackface costume draws controversy at SDSU 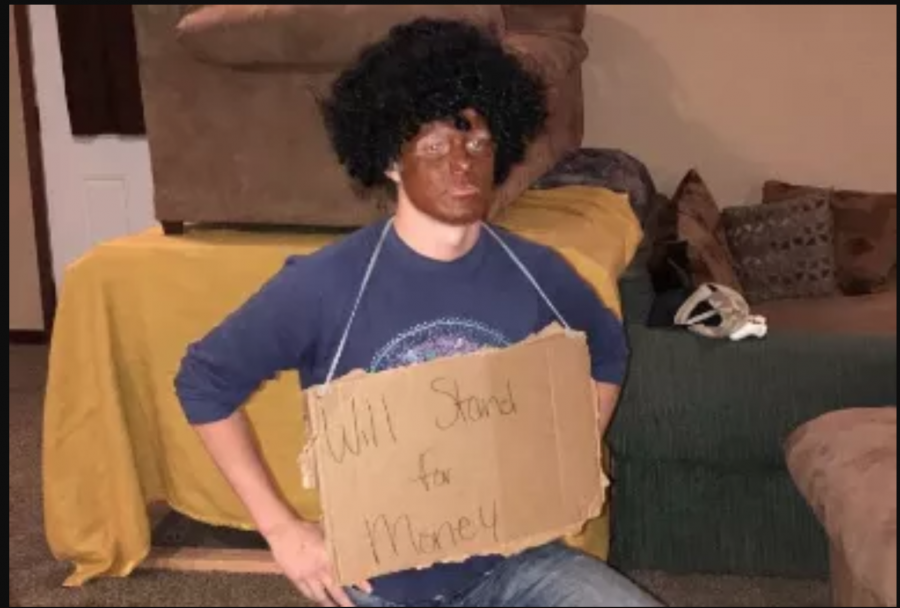 SUBMITTED This photo of former SDSU student Cole Paulson was shared Friday night. It has drawn criticism online and the universities response has come under fire from students as well.

The most vocal in the room spoke quickly.

“I don’t think, as a minority, I should have to tell you that what you do offends me,” said Amanda John, president of the Black Student Alliance. “I think that my university, as an institution that claims to support me, should be able to do that for me.”

Raised voices continued through the evening, while BSA members spoke on what they perceived as inaction of the administration in recent events involving racism and posters from a white supremacist organization hung around campus.

Though there are plans for expanded racial education, members of the student community believe more must be done.

“You cannot get my cents and not give me respect,” John said. “It does not work like that.” 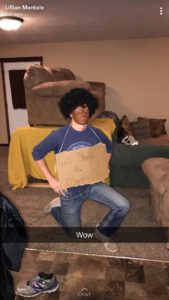 The meeting came the Monday after a photo of a former SDSU student in blackface was went viral on T. Cole Paulson wore a sign saying “will stand for money,” Friday night of Halloween weekend. It was meant as a derogatory comment on NFL free agent Colin Kaepernick protesting the treatment of black men at the hands of the police.

The anger at the meeting was more like exhaustion, because “this happens every year.”

And it’s true. Incidents related to cultural appropriation and racism happen at colleges across the country.

Administrative officials have no recourse against Paulson, according to Mike Lockrem, director of University Marketing and Communications. Since Paulson isn’t a current student, he does not fall under the student code of conduct and it is unclear whether this will affect his ability to register for classes next year.

Paulson apologized for his costume in an article by the Argus Leader.

“I will be completely honest and tell you I was ignorant to the fact as to painting my face like that was racist,” Paulson said. “It was in no way my intention to offend the African-American community, and I have read many articles and documents since to educate myself on why it was wrong of me to do what I did. I also never left the confines of my home with that paint on my face. I was contacted almost immediately about how it was wrong and proceeded to wash it off before I went anywhere. I wholeheartedly apologize as I feel horrible about my ignorance and offending many people I respect.”

Though members of BSA were upset with Paulson’s costume, most of their blame rested on the University. John said if a student has attended South Dakota State for a year and still thinks blackface is appropriate, it rests on the university’s shoulders.

“It’s a school’s problem because you’re here to educate them,” John said. “… and so, if a kid comes out after a year in this school and cannot properly assimilate to a world that has people of color, surprise, surprise, the problem is with the school.

Nathan Ziegler, director the Office of Diversity, Inclusion, Equity and Access, is trying to expand programming at SDSU regarding racism and race relations, a project he plans to have underway by the spring semester. The programming would include education on the history of racism and diversity.

He hopes to make the programming mandatory for students, but there is no “direct path.”

Systemic racism is a tough topic to broach, as it spans centuries of disenfranchisement and brutalization of minorities through blackface and other propaganda used to dehumanize them, Ziegler said. The United States’ history of bigotry, current racial insensitivity and the white supremacy movement are far from separate.

Recently, signs from the white supremacist organization Identity Evropa were posted around campus. Though the posters were taken down, the incident was still spoken of by BSA, with members not believing the administration drew a strong enough stance against white supremacy or racism.

“This young guy [Paulson] — whether he is aware of it or not — this is connected to that history,” Ziegler said. “People may not make that link. Not everyone knows that history of blackface or what’s going on with Identity Evropa. There is a lot of social propaganda and programming that’s getting people to not really think about these things.”

Lockrem said the school’s stance is to continue working on diversity with a focus on inclusion and respect. He said diversity is “paramount and core to the school’s values.”