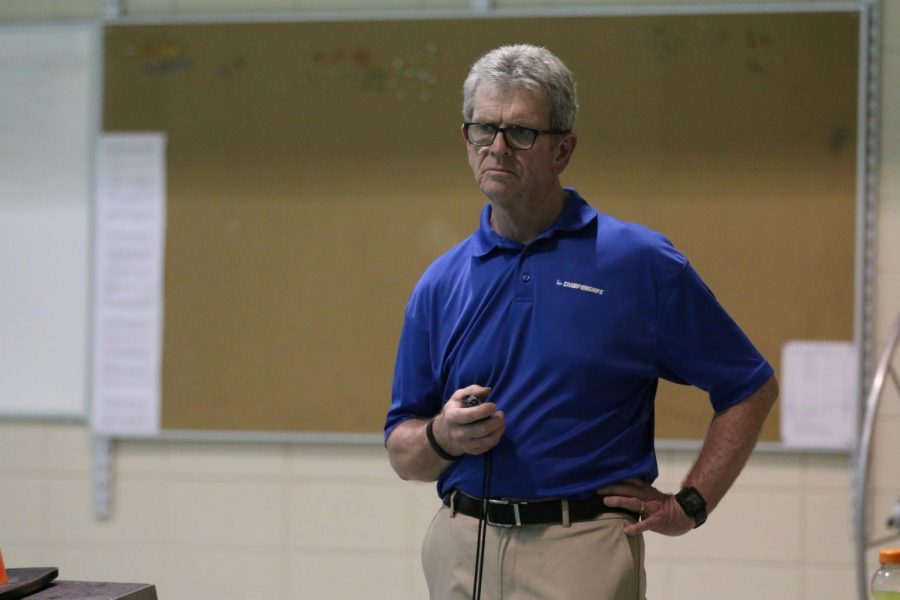 Brad Erickson was hired as the South Dakota State swimming and diving head coach in 1976,  two years after graduating from SDSU in 1974. Forty-one years later, Erickson is retiring with a local holiday named in his honor.

“He likes things low key, he doesn’t want anything fancy,” said SDSU Athletic Director Justin Sell. “So we really wanted to mark his last home meet, and to have the opportunity to name it Brad Erickson Day was a very moving experience.”

Erickson had no idea it was going to happen.

“It was very humbling and I feel very honored to have the deputy mayor make that proclamation,” Erickson said.

While a student at SDSU, Erickson was on the swimming and diving team and was the first-ever Jackrabbit to compete in the NCAA Division II Championships. He also won three North Central Conference titles while at SDSU.

After graduation, he stayed at SDSU for another year to get his master’s degree, then went to Rapid City to coach and swim for the Rapid City Racers swim club.

“The coach that I had [at SDSU], Brent Getchel, called me and let me know that he was leaving and the job had opened up,” Erickson said. “I then interviewed with Dr. [Stanley] Marshall and Harry Forsythe and was fortunate to get the job.”

Erickson, who has the longest tenure of any head coach in SDSU athletics history, was a risky hire because he had no head coaching experience.

“I think I was very fortunate for Dr. Marshall and Dr. Forsythe to take a look at me and take a chance on me,” Erickson said. “It was overwhelming for me to be a candidate, but I think Brent, my coach, gave me a glowing recommendation.”

One of the agreements in the contract for was being an assistant football coach as well.

“The swim coach salary was very low, so the coach before me went in and asked ‘What can I do to increase my salary?’ and they said, ‘Well, we’re needing an assistant football coach,’” Erickson said. “So when I got the job it was head swimming and assistant football.”

This was troublesome for Erickson because the only experience he had in football was playing one year in high school.

“The head football coach at the time, John Gregory, said, ‘Well, we’ll take you on and teach you,’” Erickson said. “I had some good mentors and they kind of helped me through that first year and taught me a lot about football, so it became something I enjoyed.”

Erickson was a wide receiver coach until 1990 when he put his full attention towards swim and dive.

“There were a lot of doubters when we announced that move,” Erickson said. “As you look back I don’t think anybody would want to go back to the North Central Conference days, so helping the program make that move successfully to Division I is my biggest accomplishment.”

That, however, is not his proudest accomplishment.

“Having the influence on student athletes that make good decisions and become good citizens are my proudest things I’ve done,” Erickson said.

Erickson has seen a lot of change since becoming the head coach 41 years ago, including the training and the swimmers themselves.

“It’s so much more intense now; so much more science behind it with using so many different technologies,” Erickson said. “The other thing is there used to be multi-sport athletes, where now kids focus on it from when they’re eight years old and so you have a lot better candidate pool for recruiting.”

Sell recognizes that Erickson is a Jackrabbit legend and he will be remembered for a number of reasons.

“In our business, most of us have to move all over the place, so the fact that he was able to stay at one place, that was his alma mater, is pretty remarkable,” Sell said. “He also had a Steady-Eddy approach and you never had to worry about Brad being focused and intense. Lastly, he is Jackrabbit swimming.”