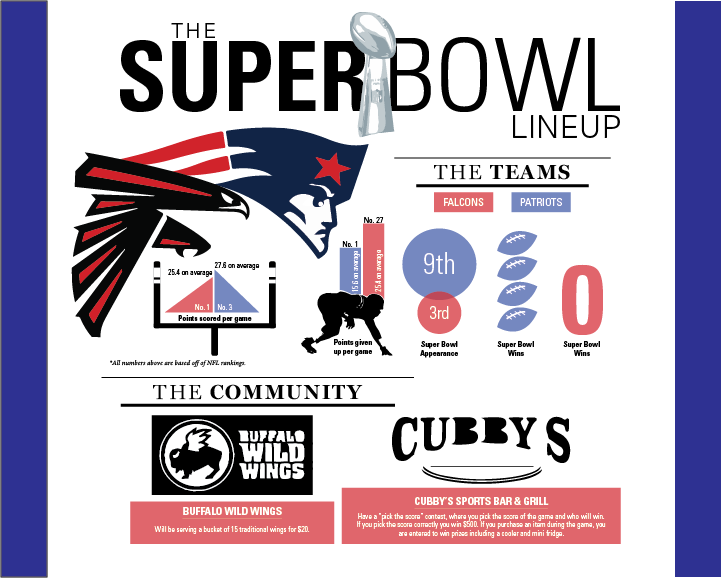 Hopefully you have plans this weekend to get together with friends, eat some good food, drink some cold beverages and watch the big game. If you don’t have plans, I hope you can at least relax on Sunday afternoon and catch the game.

Let’s get started with some hot matchups:

Julio Jones is the best receiver in the league, and I am willing to argue that with anyone. He put up some monster numbers this year. Jones caught 83 passes for 1,409 yards and added six touchdowns. The most impressive thing about Jones this year was watching what he can do after he catches the ball — he can run through, around and over any defender on the field.

On the other side of the field is Patriots hero from Super Bowl XLIX (49), Malcom Butler. He intercepted a pass from Russell Wilson on the goal line to win the game. Butler had four interceptions this year and another 17 passes defensed.

The Patriots seem to be able to eliminate the opposing team’s top receiving threat by having help from a safety over the top, just like they did to Pittsburgh Steelers receiver Antonio Brown in the AFC Championship game. It will be an interesting game, but I imagine Jones will be able to get the best of the Patriots’ secondary this Sunday.

Obviously these two quarterbacks are not actually playing head-to-head on the field, but their respective performances will likely determine the outcome of the game.

On the stat sheet, the biggest difference was their use of receivers. Even though he had over 1,000 more yards than Brady, Ryan had only three receivers with over 500 receiving yards and Brady had five. Brady is and always has been the master of moving the ball around; he “dinks and dunks” the ball all over the field and gets tremendous amount of production out of his guys.

I have to give the upper hand to Brady in this game. There are a few extenuating circumstances that contribute to this, however, as Ryan has never played in a Super Bowl and Brady will be starting in his seventh this week. The experience Brady has is uncanny and he should be calm, cool and collected going into the big game. The other factor is the whole “deflate gate” scandal. He won’t admit it, but I am sure Brady wants to get some revenge on Roger Goodell, who suspended him for four games this season.

This is the matchup I am most excited for. We are going to witness two of the better running backs by committee backfields in the league square off. Freeman and Coleman (Atlanta Falcons) combined for 1,599 yards rushing and 19 rushing touchdowns, Blount and Lewis combined for 1,444 rushing yards and 18 touchdowns (all scored by Blount).

The Patriots backs are good when they are on their game, and the Patriots’ run defense is probably better than the Falcons, but I have to give the edge to the Falcons’ backs here. Freeman is the difference maker. He has speed, strength, vision and he is a great pass catcher. I expect he will be used a lot this week. He should catch at least five passes, contribute for over 100 all-purpose yards and don’t be surprised if he scores multiple touchdowns.

There are few things in life that bring me more joy than sitting around on Sunday enjoying a quality matchup between two quality teams. This should be one of those quality matchups I look forward to.

The Falcons have one of the highest-powered offenses in the history of the league. The Patriots have a very well-rounded team with tremendous experience all around. Bill Belichick will likely go down as the greatest coach of all time, and he has had his Hall of Fame quarterback, Brady, with him every step of the way.

If the outcome of the game was simply about which team was more physical, more athletic and played better, the Falcons could win this game. However, coaching and determination have a lot to do with games like this and that will give the Patriots the win.