Jacks on a roll heading into Summit League Tournament 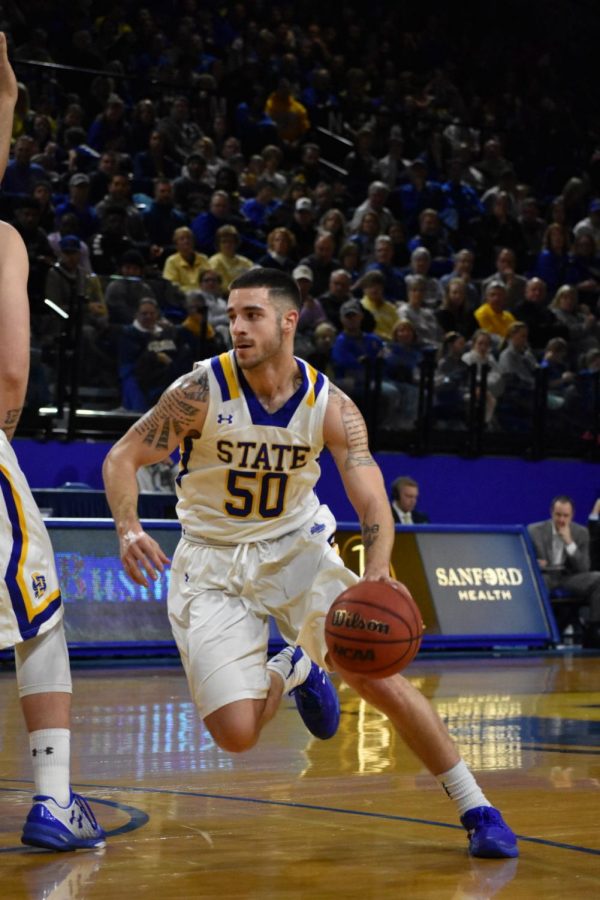 Michael Orris dribbles toward the basket to make a lay-up.

The South Dakota State men’s basketball has earned the fourth seed in the Summit League Tournament and are set to take on the fifth seeded Denver Pioneers, who they defeated Saturday 88-64.

Mike Daum had yet another stellar performance, as he scored 30 points and had seven rebounds. Denver head coach Rodney Billups said after the game, that Daum looked like a young Dirk Nowitzki, who is a forward for the Dallas Mavericks and won the 2011 NBA Finals MVP.

SDSU led Denver from start to finish. They tightened down on defense, only giving up 64 points, and won the rebounding margin. The Jackrabbits also got good contributions off the bench from Skyler Flatten, who had 11 points.

“Our effort defensively was really strong, our guys had a really defensive mindset that allowed us to score points in transition,” head coach T.J. Otzelberger said.

The Jackrabbits have split the season series with Denver.  SDSU fell 91-82 in Denver Jan. 25. In the game, the Pioneers were led by Jake Pemberton, who had 25 points and five rebounds. The Pioneers also out-rebounded the Jacks by 11.

To be victorious against Denver again, Otzelberger said the Jackrabbits will have to repeat Saturday’s performance.

When the two teams meet 6 p.m. Sunday at the Denny Sanford PREMIER Center in Sioux Falls, it will be a clash of two teams heading in different directions. Denver has lost four of their last five games, while the Jackrabbits have won six of their last eight.

Point guard Joe Rosga is also averaging 15.5 points per game for the Pioneers.

South Dakota State will head into the Summit League led by Mike Daum. In the past two games, Daum has scored 81 points. Daum has performed well against Denver this year with 29 points in the first contest and 30 in the second contest.

South Dakota State has a young basketball team, and they have only four players on the roster that have played in the Summit League tournament.

“I think every team has new players and new guys that step in. I think the benefit we have is Mike Daum, Ian Theisen, Reed Tellinghuisen, Tevin King can kind of share that experience with our guys,” Otzelberger said. “Other guys such as A.J. Hess and Michael Orris have played in other conference tournaments and are aware of the settings so there’s not a concern.”

Hess and Orris, both seniors, haven’t played in the Summit League tournament because they transferred.

Otzelberger, who is in his first year as SDSU’s head coach, also hasn’t coached or played in the Denny Sanford PREMIER Center, but said he is excited to see a great turnout of Jackrabbit fans.

If they don’t win the tournament, the Jacks will not be able to make the NCAA Tournament and their season will end. The SDSU seniors do not want to go out that way.

“We don’t want to lose and have our careers end like that. We want to go out with a bang,” said senior guard Michael Orris.

If the Jackrabbits are victorious on Sunday, they will take on the winner of the South Dakota Coyotes and the Western Illinois Leathernecks on Monday.