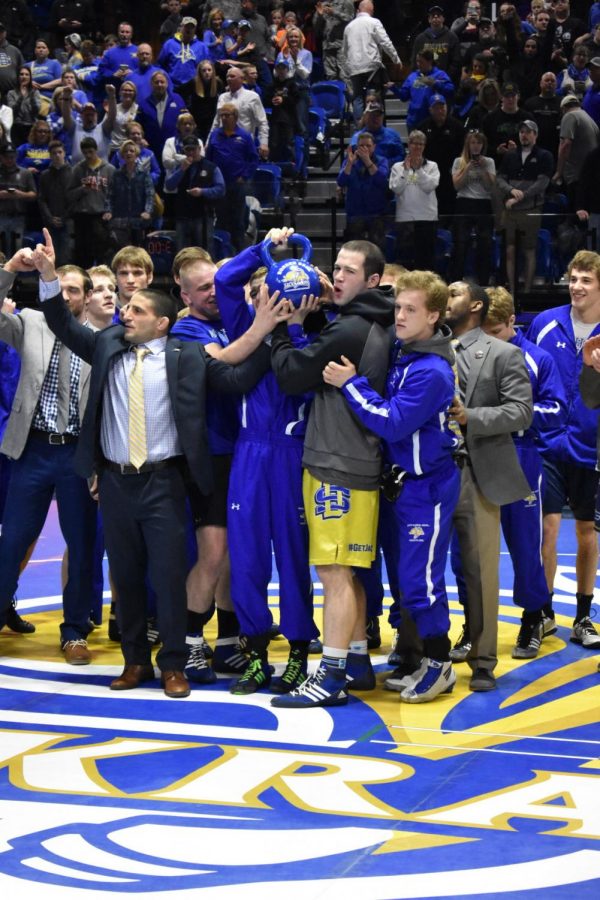 The Jackrabbit wrestling team celebrates their last home match with a 20-18 win. The team gathers around the Border Bell.

The South Dakota State wrestling team continued to make impressive improvements this year, including their first All-American since joining Division I in 2004.

In just his fifth year, head coach Chris Bono has taken a 5-12 program, with one NCAA qualifier, to new heights. They’ve now had three or more NCAA qualifiers in each of the last four seasons.

The Jackrabbits ended the 2016-17 season 14-5 and had five NCAA qualifiers with two All-Americans.

Sophomore Seth Gross led the way for the Jackrabbits throughout the season with 34-2 on the year. At the NCAA National Wrestling Championships in St. Louis, Missouri, Gross fell to Cory Clark of Iowa 4-3 in the championship match.

Gross avenged his loss to Eric Montoya of Nebraska in that same tournament.

The other All-American was senior Alex Kocer, who placed eighth in the 149-weight class at the National Wrestling Championships. Kocer was 30-11 on the year and was unseeded in the tournament, but scored three upsets over seeded opponents.

Three other NCAA qualifiers for the Jackrabbits were Luke Zilverberg, David Kocer and Nate Rotert.

“Maybe all three of them could have done a little better, but they battled hard and did a great job for us,” Bono said.

SDSU finished the National Championships in 16th place as a team with 28.5 points.

The Jackrabbits will be losing two seniors to graduation: Ben Gillette, a 125-pound wrestler who finished the year 16-18, and Alex Kocer, who contributed heavily to the South Dakota State wrestling team and finished his career 96-44.

“We have recruited well and we will be all right, but you’ll never be able to replace a guy like Alex. First of all, he’s a South Dakota native and he’s a great person, so whoever steps in next will have big shoes to fill just off the mat,” Bono said.

Bono and the Jackrabbits will be returning four of the five NCAA qualifiers, three of which will be seniors.

SDSU was coming off their most successful and impressive year for their Division I era wrestling team this year, and they surpassed that success this season.

Now, they hope to build on that.

The Jacks hosted a NWCA match against Purdue and, even though they lost, it was important they got a match to host.

In the Big 12, the Jackrabbits went 8-1 with the lone loss to top-ranked Oklahoma State Cowboys 31-9.

“It hurt because we lost to them, but we need to find a way to beat the best teams in the country, including Oklahoma State,” Bono said.

Despite having a record-breaking year, Bono is adamant on continued improvement.

“This isn’t the peak. We aren’t going to peak until we are fighting to be at National Championships. If this is the peak, I need to quit coaching,” Bono said.