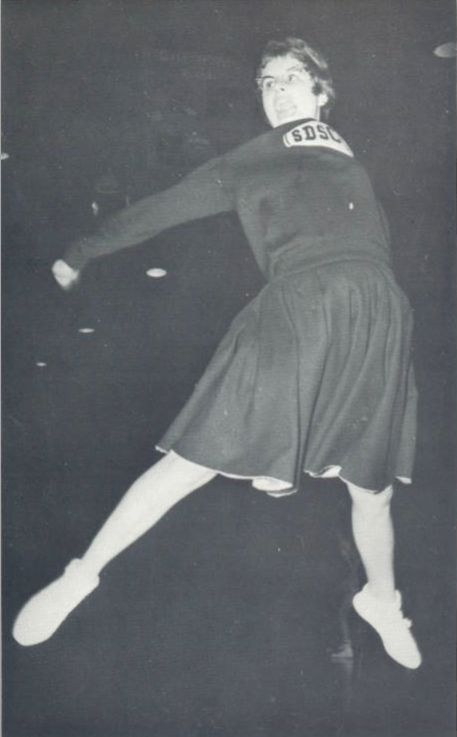 Julie Horning, Renee Cummings and Alli Cummings are not just connected as family members, but through a passion for cheerleading at South Dakota State as well.

Julie and Renee both graduated from SDSU and Alli is attending SDSU now as a freshman. Julie is the mother to Renee, who is the mother of Alli.

Not only have all three of them cheered for SDSU, they have also all cheered for the Jacks at the NCAA Basketball Tournament.

Julie was the first to do so, when she went with the SDSU basketball team to the 1961 NCAA Division II Basketball Tournament in Evanston, Illinois. About 24 years later, Renee traveled with the team to Connecticut to cheer at the same tournament.

“Going for the Division II tournament was definitely the highlight,” Renee said about her cheerleading career.

SDSU lost by one point in the championship game, which Renee said was a big deal for Jacks fans back then.

Alli got the same opportunity to travel with this year’s basketball team to the Division I NCAA Tournament in Salt Lake City, Utah, March 16.

“It was really exciting and fun, but also nerve-wracking because I never knew I was going to be on TV,” Alli said.

The game was broadcast on TBS, allowing Renee to watch her daughter cheer on television. Renee said it looked a lot different than when she went to the Division II tournament.

“Obviously, at the NCAA Tournament, they did a lot more with the starting lineups,” Renee said. “I don’t think we did quite as much as they did. But it was fun to see her cheer and it was exciting and brought back a lot of memories of when I cheered.”

Julie also got the chance to see her granddaughter on television, just like she’d watched her daughter cheer at the tournament as she had 24 years earlier.

“It was really fun,” Julie said. “We didn’t get to see her much because the focus was on the game, but we had our eyes closely on the television so we could see her and she looked great. All the cheerleaders looked great.”

Cheerleading has become a legacy for this family and it means something different for each of them. For Alli, it’s all about her love for the activity.

“I’ve always loved cheering and I just try to do my best and hope that I can do it for as long as I can,” Alli said.

When the family gets together, they pull out outfits from when they cheered and share memories.

“It’s a lot of fun memories,” Julie said. “Renee has my cheerleading blanket from South Dakota State and she also has one of the old cheerleading sweaters, so it brings back great memories and we laugh and take pictures.”

Julie’s passion for cheerleading began before she even got to SDSU because cheerleading was one of the few physical activities women could do while she was in high school.

“I was a cheerleader at the junior high and senior high in Watertown before I moved to Pierre,” Julie said. “I wish back then that they would have had tennis and basketball for girls, but they didn’t have that back then.”

Renee said she started cheering and dancing at 3 years old, something her mother encouraged her to participate in.

“She (Julie) choreographed musicals at the college in Aberdeen,” Renee said. “She helped me when I tried out and encouraged me and was a big influence on me.”

Julie said Renee tried out for the cheer team in junior high as well as high school in Aberdeen. Julie said she would give her tips on how to do well.

“I would help her and tell her what I thought the judges were looking for,” Julie said. “Which was a lot of enthusiasm and being loud and being very definite in the moves and she had a nice jump and straight legs and it was kind of fun for me to teach her.”

Renee would use what she learned from her mother to start her own cheer program at Dakota Gold and Gymnastics in Watertown in 2005. Alli, an English major at SDSU, was six years old at the time and has been cheering ever since. She tried out and made the SDSU team in the fall.

“She’s (Alli) always cheered and now she’s helping me coach. So not only does she cheer at SDSU, but she helps me coach other kids and we compete all over,” Renee said.

Renee and Julie both said what meant the most to them were the memories they made while cheering at SDSU.

“I would say that having all those memories of being at the football games, the Hobo Day game, the basketball games and flying out to Connecticut, all of that. It was a great experience and was a highlight of my college career,” Renee said.

**A name correction has been made on the online version of this story.