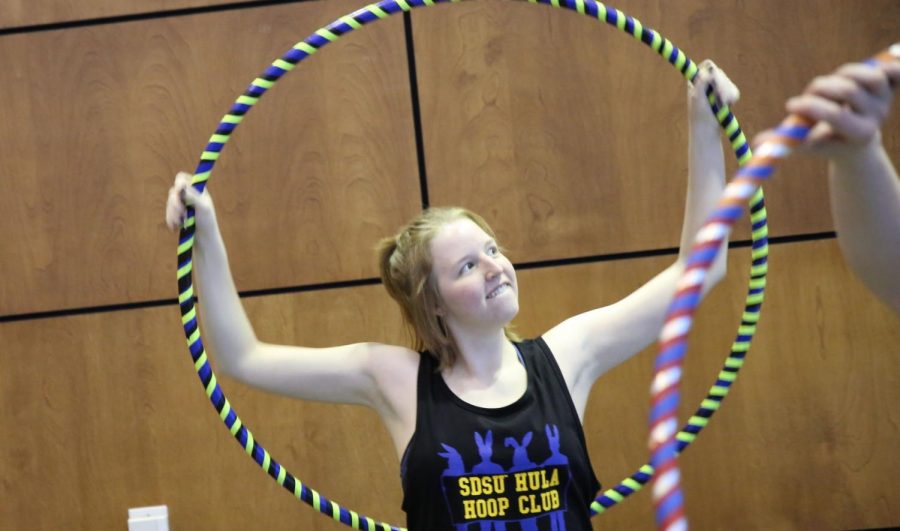 Hula hooping hasn’t gotten much exposure at South Dakota State. Which is why freshman Julia Bozzo-Myers has taken the initiative to start an official club.

Bozzo-Myers, originally from California, is the club president and became interested in hula hooping, or “hooping,” last semester. She was influenced by how popular hooping is in San Francisco and how there are regular events called “hoop jams,” where hoopers meet to show off their skills and have fun.

She quickly fell in love with her new hobby and made a goal to spread the idea across campus.

“The benefit is you can get a workout while having fun. I tend to zone out and relax when hooping,” Bozzo-Myers said. “It’s a stress reliever.”

The Hula Hoop Club had its first meeting Jan. 17, where five members showed up out of the club’s nine members. They discussed information on becoming official members, went over ideas to help promote the club and practiced basic hooping techniques. They meet once a week on Saturdays and plan to recruit more members.

Bozzo-Myers said the main goal of the club is for students to be able to relax and have fun. No prior experience is required. Club members hope to host events outside to gain more attention from students and attract new members.

The club’s most experienced member is M.J. Hardt, a graduate of SDSU who still lives in the Brookings area. Hardt has been hula hooping for years and said she found out about the club through a friend who sent her a flyer. She has been teaching the other members some of the various hoop tricks she knows.

Bozzo-Myers said the club uses campus resources such as renting rooms to meet and practice in. They also post flyers for the club on walls around campus to advertise for events.

Addie Borah, the assistant director for Student Engagement at SDSU, worked with Bozzo-Myers on getting the club started. Borah advised Bozzo-Myers on the steps she needs to take to make the Hula Hoop Club officially part of the school. Students’ Association approved Hula Hoop Club’s constitution at their Feb. 6 meeting.

According to Borah, the process that a club must go through at SDSU to become official starts off by gathering at least seven club members, a staff or faculty member to volunteer as an adviser and then they must draft a constitution for their club. This constitution must be approved by the Student Organization Subcommittee and must receive approval from SA for the mission on the club. If a club is following through in the process promptly, it can become official in a month.

Benefits of being an official SDSU club include renting rooms on campus for free, access to motor pool vehicles for events and an on-campus bank account, according to Borah.

She also said official clubs have the privilege of not having to worry about their flyers getting taken down, which is what happens to unofficial ones. There are currently more than 200 active clubs at SDSU.

Promoting the club and getting more students involved will be key to the club’s success. A club must maintain a minimum of seven members to stay official and since the club is new, there are many students who are unaware of it.

“I think it is a new, interesting idea,” Warren said. “I don’t know if many students know how to hula hoop very well, so that may be an obstacle the club faces in the future.”