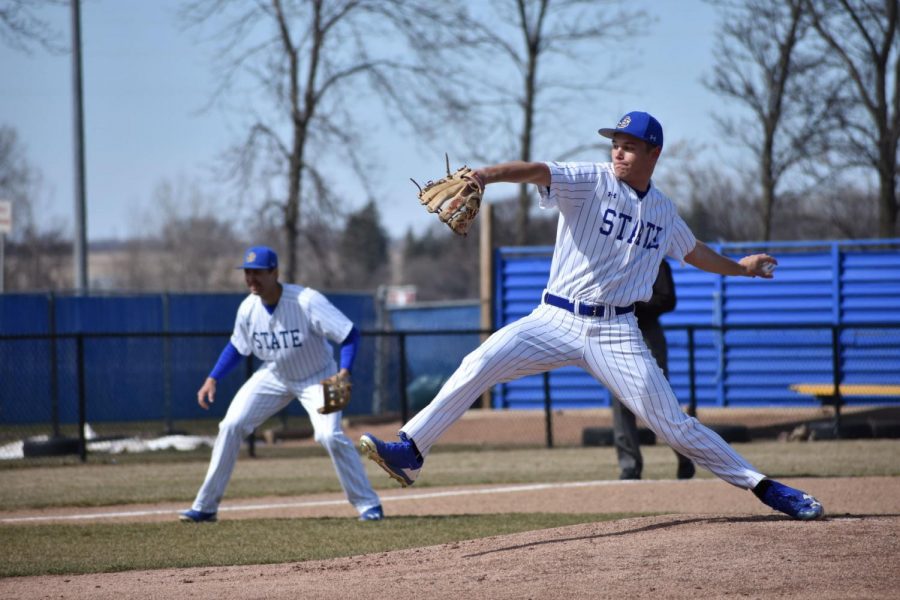 Over the weekend, the South Dakota State baseball team completed a series sweep over the Summit League opponent, the Fort Wayne Mastodons.

The Jackrabbits are now 13-10 overall and 6-3 in Summit League play and own second place in their conference.

Runs were hard to come by on Friday as the Jackrabbits scored the decisive and only run of the game in the bottom of the 11th inning as they beat Fort Wayne 1-0.

“It was a blip in our season as we are used to coming by runs,” head coach Rob Bishop said. “I’m proud of our guys for sticking with it and executing the squeeze play.”

On Saturday, the Jackrabbits scored nine runs in the seventh inning en route to a ten-run rule victory 12-2.

The Jackrabbits defeated the Mastodons 10-6 Sunday, largely due to the Jacks’ five-run sixth inning.

The Jackrabbits dominated the Mastodons’ pitching throughout as they out-hit Fort Wayne 32-22. But they also played good defense Bishop said.

It was a response that Bishop was happy with as the Jackrabbits were coming off getting swept by Oral Roberts and a few injuries.

“It was great. We came off rough injuries in the last week, but it was great to see the guys bounce back,” Bishop said.

South Dakota State will now be back on the road for ten games.

Bishop is convinced that his club won’t be discouraged or feel overwhelmed facing a Big Ten opponent.

Both teams are entering the series with winning streaks. The Hawkeyes completed a three-game sweep over the University of Nevada at Las Vegas Rebels over the weekend. Iowa is the winner of their last six, while the Jackrabbits have now won four straight.

Iowa has been playing particularly well at their home stadium, Duane Banks Field. The Hawkeyes are now 9-1 on the year when playing at home.

First baseman Jake Adams leads the Hawkeyes as he has hit 10 home runs and has 34 runs batted in (RBI) in 102 at bats.

Drake Robison is getting the start pitching for the Hawkeyes and is 1-2 this year with a 6.75 earned run average.

After the Iowa series, the Jackrabbits will travel to Fargo to take on the North Dakota State Bison, who are 11-15 and 4-5 in conference play.

The Bison sit in third place of the Summit League, and the three-game series could have major implications on standings.

For SDSU, Matt Johnson has gotten on base safely in all 23 Jackrabbit games and has a hit in 21 of them.

“We need to find different ways to win,” Bishop said.