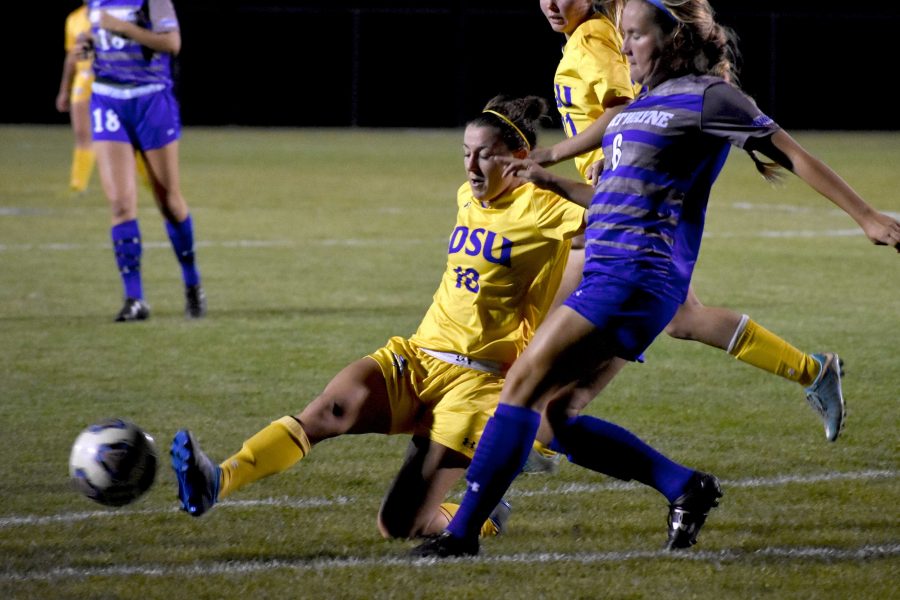 After a 2-0 win against Oral Roberts Sunday, the South Dakota State soccer team extended its winning streak to seven games and clinched a spot in the Summit League Tournament. The Jacks are now 5-0 in conference play and will close out the regular season at home against two rivals.

“We’re all meshing together well right now at the perfect time and it couldn’t be any better than to be doing this at the end of the season,” said sophomore forward Leah Manuleleua.

The University of South Dakota (4-11, 2-3) will head north to Brookings Thursday. The Coyotes have won two games in a row, but are on the outside looking in when it comes to the Summit League Tournament. The top four teams make the tournament and they are in fifth. They will have to win their final two games if they want to get in.

The Coyotes have scored seven goals in their last two games.

“We know that these games mean a lot to a lot of people and it’s an honor to play and compete in these types of games.”

SDSU head coach Brock Thompson said it is important the Jacks defend and attack well because USD will bring everything they have with their season on the line.

“We know that these games mean a lot to a lot of people and it’s an honor to play and compete in these types of games,” he said.

NDSU scores 1.13 goals per game and will face the tough task of scoring on SDSU, which has shut out its last four opponents.

The Jacks’ sophomore goalkeeper, Maggie Smither, is having quite the season. She has 77 saves, a .846 save percentage, and gives up only .89 goals per game. She leads the Summit League in all three categories and is the only goalie to give up less than one goal per game in the conference.

On the other side, NDSU has started two goalkeepers throughout the season. Sophomore Monica Polgar has started 11 games this season and junior Julia Edelstein has started four. Between the two, they’ve given up 1.86 goals per game, which is sixth in the Summit League.

On offense, SDSU has two players tied for the team lead in goals. Senior forward Nicole Hatcher and Manuleleua both have six goals on the season, which is tied for third-most in the Summit League. Hatcher is also tied for the most assists in the conference with six.

“NDSU is always a fun game,;our players are looking forward to it,” Thompson said. “They’re a good program and we have a lot of respect for them as well.”

This will also be senior day for SDSU. They will honor Hatcher and midfielders Julia Lam, Jennie Scislow and Tori Poole in their last game at Fishback Soccer Park.

“Anything that I say about them will pale in comparison to what they mean to this program,” Thompson said. “Anytime you have four individuals that put so much time and effort into the program both on the field and behind the scenes will carry on for our program for a long time.”

“We have to put it into context and realize that our main focus is to be our absolute best on Thursday. Nothing more, nothing less,” Thompson said. “Then when we do that, we move on after that game.”