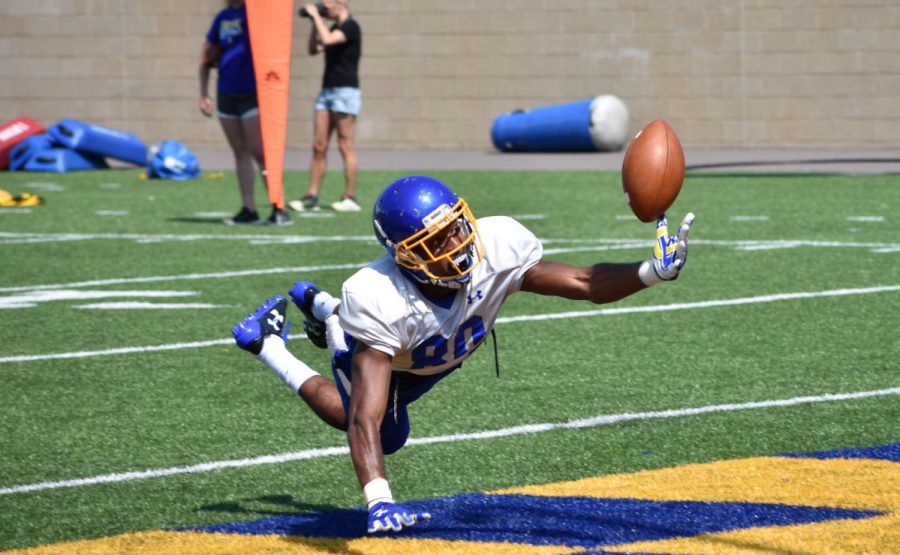 For the first time in the program’s history, the South Dakota State football team will open the season with a Thursday night home game. SDSU will begin their season at 7 p.m., August 31 against Duquesne.

The Jacks shared their first-ever Missouri Valley Football Conference title with North Dakota State last season, earned a top-eight seed to the FCS playoffs and advanced to the quarterfinals in the playoffs for the first time. SDSU is one of only four FCS programs to reach the playoffs each of the last five seasons.

“I’m blessed to be around my assistant coaches,” Head Coach John Stiegelmeier said. “They deserve more recognition for the success of this program. We never have been ranked higher than we have now, which is a credit to the past and current teams. We’ve also never had higher expectations and that’s credited to the team we have now and the hard work they put in.”

SDSU returns a core of the team that went 9-4 last year and earned the fourth spot in the STATS FCS poll. The Jacks will have attention from the media with their ranking, but are also gaining attention from NFL scouts.

“Staying humble going into each and every game is a big key,” sophomore middle linebacker Christian Rozeboom said. “We are going to have a target on our back, so we need to come ready to play every game, especially with all the great teams we have in the MVFC.”

The Jacks were one of the most productive offenses in the MVFC and the FCS this past season, averaging more than 500 yards in total offense per game. SDSU returns nine starters, including four All-Americans on offense in junior quarterback Taryn Christion, senior tight end Dallas Goedert, senior wide receiver Jake Wieneke and senior center Jacob Ohnesorge.

Christion had a record-setting sophomore year and hopes to continue that success.

“If we run the right routes, I find the right reads and the right footwork, we should be an even better team if we get the little things down and go out and perform,”  Christion said.

Wieneke and Goedert are both names on NFL teams radars this season, along with senior defensive tackle Kellen Soulek and Ohnesorge.

Goedert, a 6-foot-5-inch, 260-pound senior tight end from Britton, ranks eighth in career receiving yards at SDSU with 1,877 yards and holds the SDSU single-game record with four touchdown catches. He had 92 receptions for 1,293 yards and 11 touchdowns, which is nearly triple his receiving yards from 2015.

Wieneke has broken several records in his first three seasons and is three receptions away from breaking the career receptions record. The three-time all-MVFC and three-time All-American led the team and league in receiving yards (1,316) while ranking second on the team in receptions (78) and hauling in 16 touchdowns last year.

Wieneke says he’s not going to let the attention from scouts and media distract him.

“I’m going to just have fun and live in the present,” Wieneke said. “I’m going to take everything in and just enjoy every meeting, every practice and every game this season. I have loved every second of playing under Coach Stig the last four years.”

Wieneke, Christion and Goedert will all be captains for the first time in their careers during the 2017 season. Alongside them will be Rozeboom, senior running back Brady Mengarelli and senior center Jacob Ohnesorge. Ohnesorge will be the second Jackrabbit player in program history to serve as a team captain for three seasons.

The defense welcomes back six starters, along with the addition of countless new faces to replace the graduated seniors. The Jacks will be strong up the middle with the return of All-MVFC performers in Soulek and Rozeboom.

Soulek has been one of the top interior defensive lineman in the MVFC the past two seasons and led the team with 7.5 sacks and 10 tackles for loss.

Rozeboom led the team with 132 tackles last season and earned MVFC Freshman of the Year award. He also finished runner-up in the Jerry Rice Award as the top first-year player in the FCS.

Though the Jacks are returning many starters, there will be a lot of new faces on the team.

Last year, the Jacks pulled a couple of redshirts, but this year SDSU has a handful of freshmen already in the rotation in fall camp. Linebackers Seven Wilson and Noah Urbanek, defensive end Daniel Callender, offensive linemen Eddie Miller and Jon Gruetzmacher and defensive lineman Xavier Ward could all be true freshmen with the chance to play right away.

“We’ve got a chance to play more true freshmen than we ever have,” Stiegelmeier said. “That’s a credit to our coaches and the recruiting they’ve done, and to the players for getting here in the summer so they could get an early start.”

The Jacks will have six games at Dana J. Dykhouse Stadium this season and play five on the road. Five of their 11 opponents are in the preseason STATS FCS Top 25 poll. North Dakota State is No. 2, Youngstown State is No. 9, Northern Iowa is No. 18, Illinois State is No. 20 and Western Illinois is No. 25.

Stiegelmeier said that the team’s goal is to win a national championship in Frisco, Texas at the end of the season; especially with such a high preseason ranking.

“The message has been that we need to grade our players at a national championship level,” Stiegelmeier said. “That means if we’re practicing and competing and performing at a level where we can get to Frisco, that’s our expectation.”